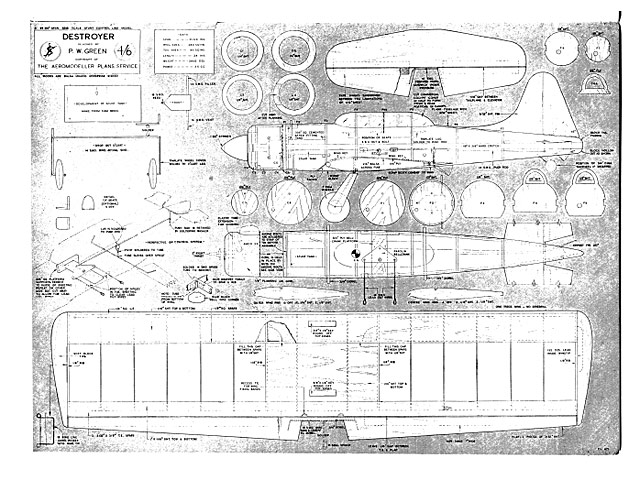 Quote: "COMBINING both elevator and flap control, this stunt model is typical of the modern trend in design. In one respect is differs from the usual run of stunt controliners, in that its attractive appearance makes it almost unique as a model that can both look and fly the part of a semi-scale attack bomber of the 1939 era.

Moreover, considerable thought has gone into the structural design of the Destroyer and even though the reader may not wish to build this model, he will find many interesting ideas incorporated and worthy of reproduction in other designs. Sandwich type hinges are put to good effect with their realistic appearance. A commercial canopy cut in half and lengthened by a plain celluloid insert goes to make the ideal reproduction of the cabin which was so typical of the American attack bombers. A simple drop-out undercarriage adds to realism on the ground whilst radial type cowling with reasonable size spinner does not look altogether out of place and combines good cooling with streamlining.

Perhaps the most interesting feature of this model is the novel way Bill Green has connected his wing flaps to the elevator push rod. The joint is made by pushing the flap spigot into a tube which swivels on the pushrod and so provides a detachable fitting, enabling the builder to remove the wing for transport.

We have had an opportunity of testing this model and found it quite a revelation in smooth control through unlimited consecutive loops, bunts and all those manoeuvres which go to make the well known SMAE contest schedule. Bill's model had considerable pull on the lines and through liberal use of colour dope and heavy wood, its wing loading was higher than most. This was no detriment to the flying qualities which are of the highest order,

In spite of a rough motor run during one flight, we found that the heavy loading maintained line tension and we were able to split the circle with perfectly vertical wingovers with no fear of falling-off at the top. For inverted work the model handled like a charm, flying rock steady at any altitude down to zero and once again due to this higher loading completely unaffected by unwelcome gusts of wind. The thrill of flying this pleasing model extended right through from take off to landing and the latter was always preceded by at least one complete lap of practically beautiful glide.

As a stunt model that would not shame any Gold Trophy winner and the appearance of which gives one considerable satisfaction in flying, we thoroughly recommend the Destroyer to all 3.5 cc owners."

Added supplementary file: This is a modern redrawn plan in PDFvector format, by hogal.

Quote: "The Destroyer is a semi scale control stunt model designed by Bill Geen. It is sized to be used with the popular 3.5cc motors of the time. The staff flew the model and are full of glowing praise about it handling, stating that it is capable of doing the full SMAE stunt schedule without any problems. There is also praise for some of the innovations on the model which include a removable wing and a dolly undercarriage. They do seem, however, to have a bee in their bonnets about the weight of the machine so was it really that heavy? Enjoy the plans and, as with all my drawings, they are tracings from the scaled up scan. If you are going to build from them proceed with caution, measure well before cutting..." 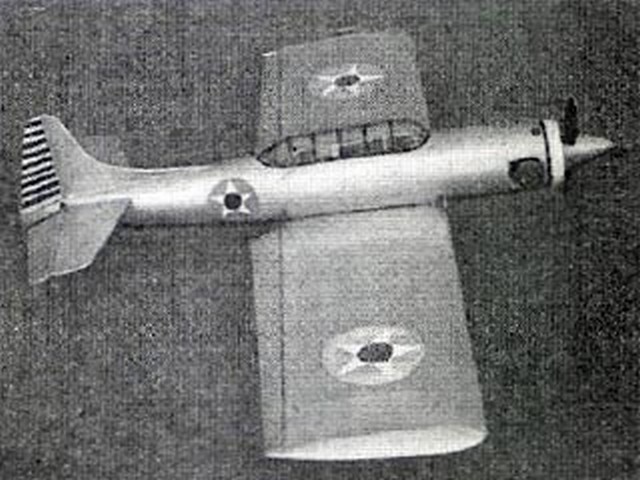