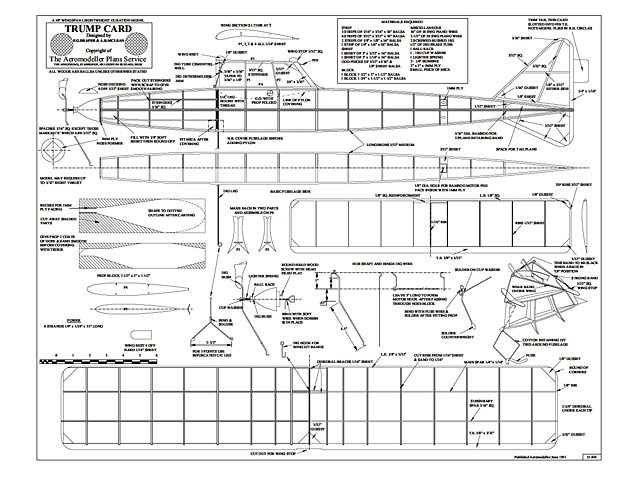 Trump Card. A 30in lightweight rubber design by FG Draper, from Aeromodeller, June 1951.

Quote: "TWO seasons' work on a series of fifteen models - excluding numerous variants built by Hatfield Club members - has brought the Trump Card to a degree of development where it is felt that further modification will have little effect on consistent performance.

Fuselage: On the first two models a slab-sided layout was used, but subsequently a diamond was chosen, as when considered in conjunction with the pylon it offered both aerodynamic and structural advantages. In particular it minimised interference drag and permitted a stronger junction.

Further aerodynamic improvernents included stream-lining the nose and slimming the pylon. Both 1/16 and 3/32 square stock was used for the fuselage construction, but an effective compromise was struck by using the larger section for longerons and the more highly stressed spacers, the rest remaining 1/16 square. This gave a light yet 'thumb-proof' structure.

Wing: Of the sections used the turbulent flow types and in particular Sigurd Isacson 73508 seemed to give the best glide. Sparless construction was recently discarded in favour of the present structure as shown on the plan. This is appreciably lighter and calculations indicate that the strength in bending of the uncovered wing is up some 30 per cent.

Laminated semi-circular tips were abandoned in favour of square tips in the interests of lightness and ease of construction. Moderate straight dihedral gave adequate lateral stability and eliminated the slight rocking tendency experienced with polyhedral and once again simplified construction..."