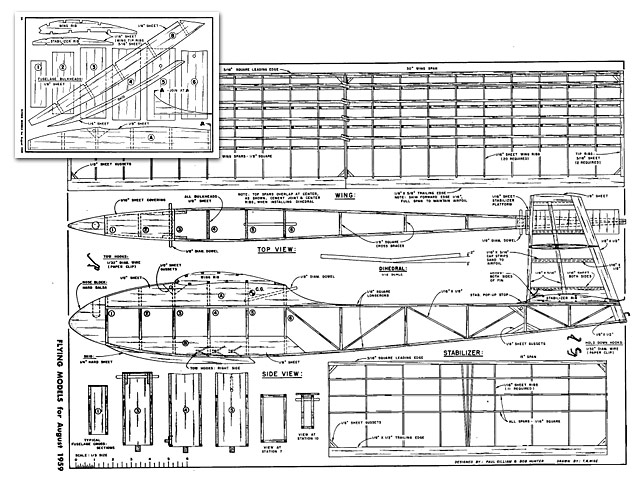 Nogy Glider. Presented in the August 1959 Flying Models. It was also featured on the cover illustration of the July '59 issue. The Nogy glider model appeared in the movie "Nogy" from Studio Graphic, with young Kent Nogy as the lead.

Quote: "Here's your chance to build a 'movie star'. Before you run off with a wild look in your eyes, we'd like to point out that this movie star is a towline glider, one that you can have loads of fun flying and a very inexpensive movie star to have 'round the home.

Our 'Nogy Glider' was born of a movie script. It has been our idea for many years to make a movie that dealt with model planes. There's been plenty of adventure, human emotion and story line in the field of modelling. It has been overlooked for too many years. With this in mind, we decided to have a .go at a picture of our own—one which would be shown in local movie theatres all over the nation. At this point, we think we can say that it will.

Our story deals with a young model builder, a model meet and all of the emotion that can center around a scene of this type. Think of the aims, ideals, skills and emotions that can center on this plot. Cross-purposes add the spice along with the 'age barrier' that exists between characters.

Why all of this background? You're not going to buy the movie? You think we're plugging too hard? Well why not, everyone else in the business does and some are out to sell 'sick' pies which people line up to see.

No, this hasn't been for the plug, alone. Our lead Kent Nogy plays the part of a starry-eyed youngster who has his feet on the ground, his heart up in the clouds, and who has a simple model that only a beginner would have. The model meet is loaded with hot honkers and experts. So now came the problem, we needed a glider with 'character,' one that could act the part of being simple to fly and build. It had to perform for we wanted good sequences in our film. It had to be young and not ageless like some of the many gliders we see today.

In the end, we produced our movie star, a glider that we feel performs both as a star and a model plane. We know that you're not planning to make a movie, but you might want a glider like 'Nogy'.

WING: All construction will be much neater if you use wax paper to cover your plan so that the parts won't stick. This makes construction a little longer in some cases as the air doesn't get to the cement from the bottom as easily. Begin assembly by cutting out the necessary parts. A template of the rib section can be made from plywood to help in cutting ribs to exact shape. You will need twenty ribs cut from 1/16 sheet balsa and two tip ribs cut from 3/16 sheet. A good sharp single-edged razor blade is handy for making the spar notches.

Notch the 1/8 x 5/8 trailing edge as shown and pin it in place over your plan. Cement all of the ribs in position and while the cement is still wet..." 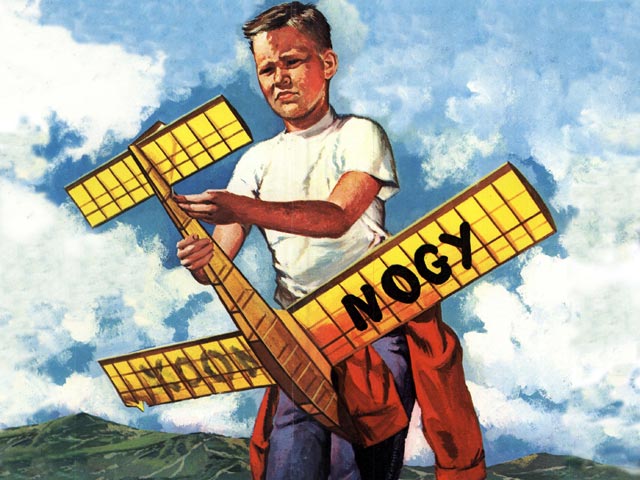