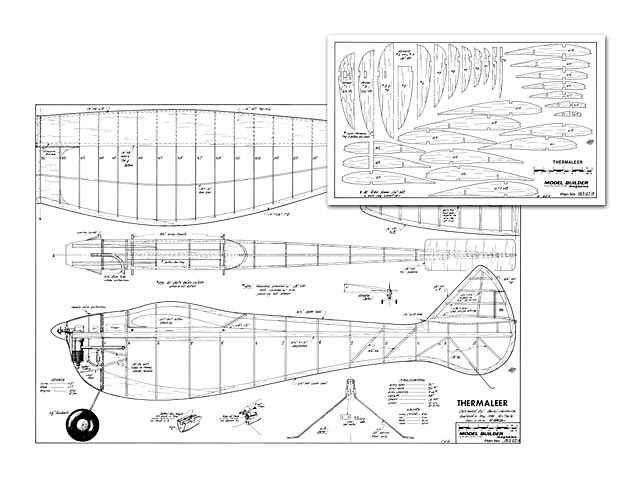 Note the Thermaleer design was first published in Air Trails, May 1940. This here is a later redrawn plan from MB Jan 1983.

It seems that no matter what era of modeling you may examine, there have always been, at any one time, the high-strung, super-climb, mediocre-glide 'Hot Shots' and the low pressure, non-tricky, gradual-climbing, float-on-anything 'Cruisers.' The Thermaleer is one of the latter.

At a contest, the Hot Shots invariably outnumber the Cruisers about ten-to-one. Of course, this is logical, as the hot shots are usually available in kits, and at ten-to-one odds, they simply overrun the cruisers in the competition.

But the cruisers are sneaky. They calmly, and gracefully ease up to a reasonable altitude, lose nothing in the smooth transition from power-to-glide, and then proceed to float around on any slight excuse for rising air. About the only tense moment may occur it the cruiser seems to be picking out an uncomfortable spot on which to land!

Because of their relaxing flight manners, which usually result in a longer useful life expectancy, cruiser designer/ builders tend to pay a little more attention to esthetics; beauty of form and line, in their creations. Thermaleer, designed and built by Dan Veronica, was a prime example of this philosophy. And it paid off. According to the article presented in the May 1940 it Trails, which accompanied the plans, Thermaleer, at time of publication, had won three trophies. It recorded a three-flight average of 17-1/2 minutes, and its longest single flight was 45-1/2 minutes. Not bad for a cruiser!

Unfortunately, but par for the course, the only reference to balance point on the drawings (nothing in the article) was a suggestion that the battery box should 'move backwards or forwards to trim for CG.' Noting that the wing is at two degrees positive and the stab at one degree negative, and that the stab is fully symmetrical, we'd suggest making first test glides with the model balanced at the front wing spar, and go from there.

R/C can be a little tricky with this one. The possible rudder area is cut almost exactly in half by the stabilizer, so you might have to split the rudder into two parts. However, this is a cruiser, and maybe just the top half will provide enough rudder control for relaxed maneuvering - after all, you don't roll and loop a cruiser." 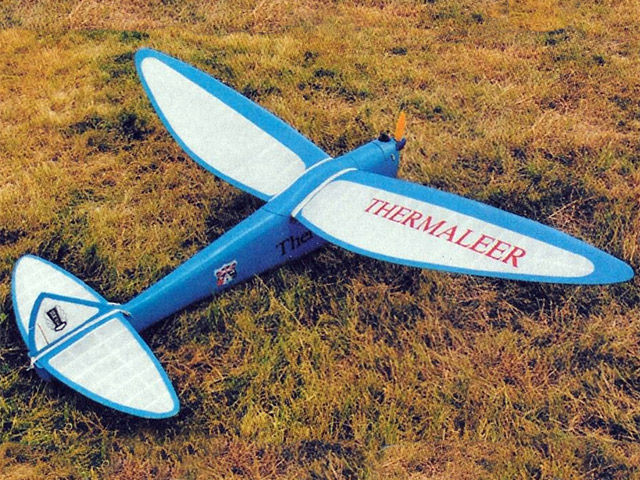