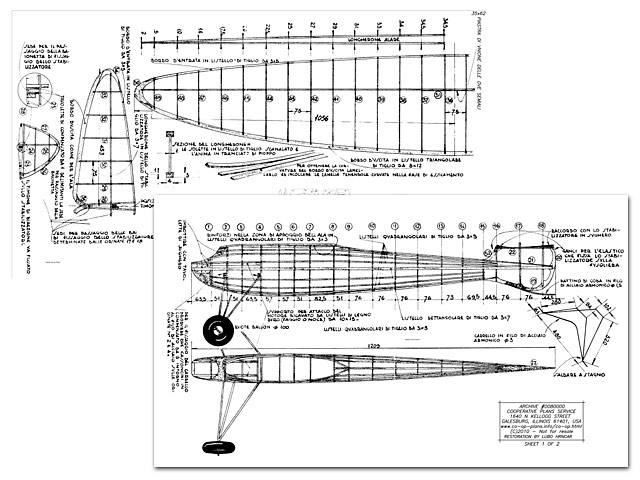 Update 02/05/2018: added two pages about Ridenti's success with the Duca/ Duchess at the Pensacola SAM Champs in 2000, from Modellismo, thanks to Pit. 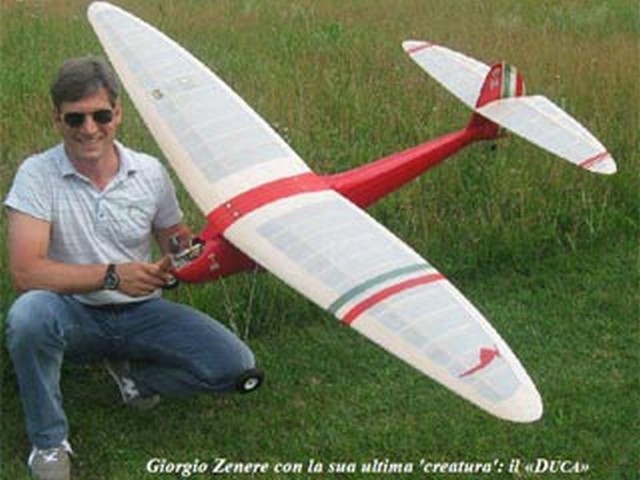 Duca was the name given in an Italian mag after the War. It is, in fact, an American design but the Italian name stuck when Italian modeler Ninetto Ridenti showed up at the Pensacola SAM Champs with one in 2000.
RyanNX - 23/07/2012
The Duke-The Duchess: the original plan by Larry Eisinger was published in a Fawcett publication booklet titled "Model Builder's Handbook No.1" 1939. He made several similar models that culminated in the Duchess, the most elegant of all his previous models. When Italian modeller Giovanni Ridenti came to USA in the nineties for an oldtimer contest with this plane, all American modellers thought it was an Italian project due to the elegance of the design, and they didn't know or believe it's an American project. It was never published in a model magazine, only in this booklet of which he later became an editor. Only a few plans by Eisinger still exist and he probably ceased aeromodelling in the forties, leaving no trace. I don't know if he is still alive today. Probably this booklet arrived in Rome where foreign magazines were not so difficult to find. For the first issue of Modellismo magazine they reproduced the plan not mentioning Larry and changing the name to The Duke. The plan was reinked by Mario Rodorigo, one of the several Rodorigo Brothers modellers. The plan was adapted for Italian woods, in fact balsa arrived in Italy with the Allied Forces soldiers/modellers at the end of the WW II. The model was built in plywood, hardwood and cork bloc instead of balsa bloc! Italian boys used dried Agave plant fiber that was quite light and similar to balsa wood, called by them Agabalsa. When I was 13 I was fascinated by this model, having the original magazine bought by my father in 1945, and I decided to build it. I completed only the fuselage and I remember that there was an error in the first formers where the engine bearers are located.
Pit_Italy - 01/05/2018
Here are some photos of DUCA-DUCHESS-DUCHESSA built by Giovanni Ridenti (his plans are on OZ too), first placed in Pensacola in 2000 [more pics 003-005]. Ridenti modified construction particulars like wing bayonet for splitted wings or reinforcements, but his plane was built on Larry's plan rather than Rodorigo's plan. Two photos with 1939 on the wing are from another modeller [more pics 006, 007].
Pit_Italy - 02/05/2018
Ridenti rebuilt a second Duchess [more pics 008] after the first (Pensacola winner) was destroyed in a contest by radio interference.
Pit_Italy - 02/05/2018
Add a comment