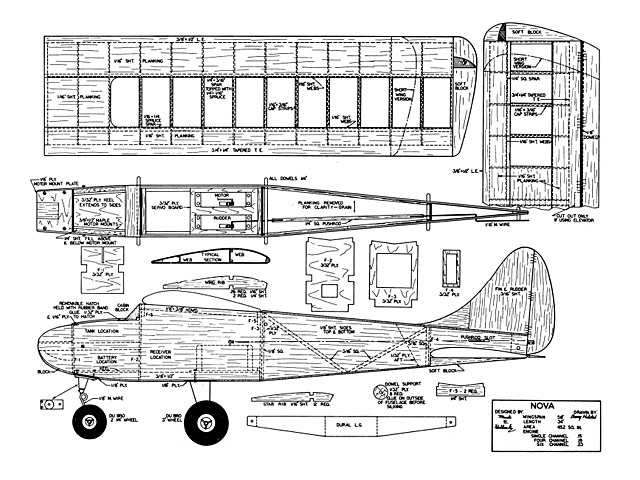 Quote: "No matter what phase of our hobby a modeler pursues, he will, at times, come to a standstill in his activity, reflecting upon the things he would most desire in the perfect model. From his own experience, he will sort out the bad ideas and characteristics and retain the ones he knows are desirable for this particular model. Then he will begin to design that ship which he feels will provide the top performance for a certain job to be done. Out of these efforts may come many failures, but persistence will usually lead to success.

In effect, the foregoing thinking led to the development of the Nova design. Too many times wings came apart, nose gears caved in, fuselages split apait, rudder movements weren't adequate to keep control, engines broke out, ad nauseum, in the usual commercial kits. It was finally decided that, just as a better mouse trap could be built, so could a better radio con-trol plane!

Thinking back through many years of modeling, we decided to set down the points we felt were needed in an ideal RC model. The following are the characteristics we felt every modeler wants in an RC plane:

1. Easy and economical to build and operate.
2. An easy, stable flier with built-in recovery tendencies, yet outstanding in contest performance.
3. Rugged and dependable - built to take punishment, but without ex-cessive weight.
4. Maintenance free - leaving more time for flying instead of repairing!

These are the main reasons behind the Nova design - but we were also thinking about a versatile design - one that could be built and flown by beginner or expert alike, yet would be able to perform exactly the way the flier desired. It would also have to be adaptable to any number of channels or to any type of radio gear. Sound impossible?

It was felt that, in order to accomplish all of these prerequisites with one model, a design was needed that would fly well on rudder-only equipment, yet with the area and room to accommodate the addition of any number of control surfaces and extra equipment necessary for their operation.

In order to determine if the first characteristics (easy to build) would meet the test, it was decided to let another person build the first model from the original plans. For this we wanted a person with very little modelling experience, and decided upon my wife, Velam, as a good choice for the test. She had only built one RC model prior to this attempt and had required con-siderable help in order to get it built and flying.

With only the plans and materials for the Nova before her, she began the task, and in short weekend had the plane ready for painting. One more day, and she proudly produced the completed model for approval - it was a beauty! All red, trimmed with white and black, and as professional looking as might be expected of a far more experienced modeler. A couple of days later we installed the radio equipment and prepared the model for the first test flights.

Now satisfied that the first requirement had been met, we went on to test the second. (Is it stable? Does it have built-in recovery tendencies?) We loaded the plane and flying gear into the car and headed for our club field, north-west of Fresno, California.

After getting the plane ready and checking the prevailing wind direction (about 12 to 15 mph - really too much for a first flight), we started the motor and checked the controls. Velma released the model and the test began. The big question in my mind at that moment was, "Would it be stable enough to control in such a breeze?", but it was too late to worry about that as the plane roared straight down the runway into that small gale! It lifted off the ground and continued to climb straight out into the wind with only a slight turn, noticeable about 200 feet after lift-off. It continued to climb steadily, even down wind. After throt-tling back to cruising speed, we made a couple of turns around the field and the nentered into the approach pattern for a landing. It set down smoothly and with ease. After adjusting the on the rudder horn to stop the slight right turn tendency, we filled up the tank, revved up the motor, and took. off again - this time to find out just what- the Nova could do maneuver-wise.

We found the Nova to be highly manuverable in the stunts as well as very smooth and easy to handle in the procedure turns. Above all, we noticed three outstanding characteristics that most rudder only jobs lack..."

Article pages, text and pics, thanks to JimFlint. 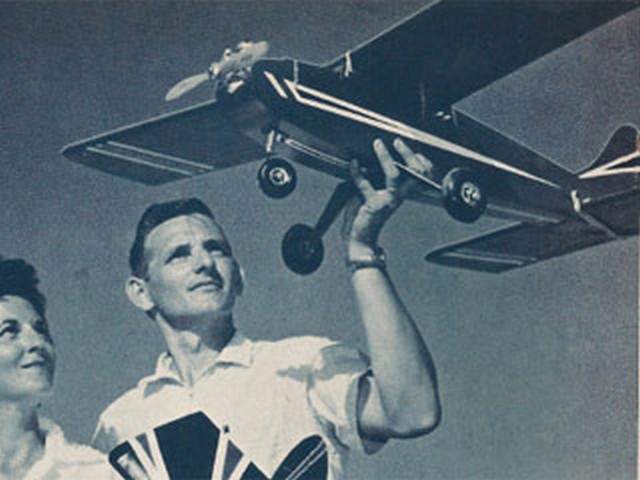 I'm probably one of the few who built one of these back in the day and is still flying. In 1964, I was working as a draftsman for Modern Homes and Equipment, and I had my own drawing board at home, so I scaled up the plans from RCM rather than wait the several weeks it took to get full size plans. If you wanted plans, you had to send a letter to RCM with a money order from the Post Office (another trip), wait for the money order or check to clear, more postage back to Alabama, and then it would appear at your house. Or maybe the postman decided it was too big for your mailbox and you made another Post Office visit. I was able to print my plans using the blueprint machine at work. Jack Sabine, a club member, was in the plastics business and needed some drawings for his catalog. I did his drawings in exchange for a Controlaire Mule transmitter and an SH-100 superhet receiver, cutting edge at that time. Using a superhet allowed you to fly more than one plane at a time without interference, a big advantage. The Mule worked perfectly, and the SH-100 also worked in my test airplane, with Bonner escapement and Cox 049. I, like all R/C builders, knew better than to use a new radio in a new airplane with a new engine. I ordered two Royal single channel servos from World Engines for more power than my Bonner rubber band could supply. They worked exactly like escapements, using the push button on the Mule, one Royal for rudder and the second controlling the McCoy 19. It worked fine in the front yard, allowing me to drive it all around without any problem, but the throttle was my downfall. It wasn't my first model with throttle, just the first one that worked, for a while. My Nova lasted for about 100 feet in the air, then came crashing down into the grass, damaging the fuselage and destroying the silk covered wing. Believe it or not, I still have the original rib pattern, and so I patched up the motor mount and built another wing. I was faster back then, only needing about a week to be ready to fly. Same song, second verse, a big splat soon after takeoff. Maybe I needed some more troubleshooting. No such thing as internet or YouTube University, and so I consulted other more experienced club members. They knew what was wrong, my superhet, like all superhets, was sensitive to noise, in my case caused by metal-to-metal contact on the McCoy's throttle. My Mule (a real kick) would overcome the electrical noise while close by, but once in the air, it went bananas and smacked the ground. No plastic clevises available, so I carved up an old toothbrush handle and installed it on the McCoy. Problem solved, but by that time my Nova was history. I did use the McCoy and the Royal servos in other airplanes, and my Nova gave up its life for science.
Doug Smith - 13/06/2020
Add a comment