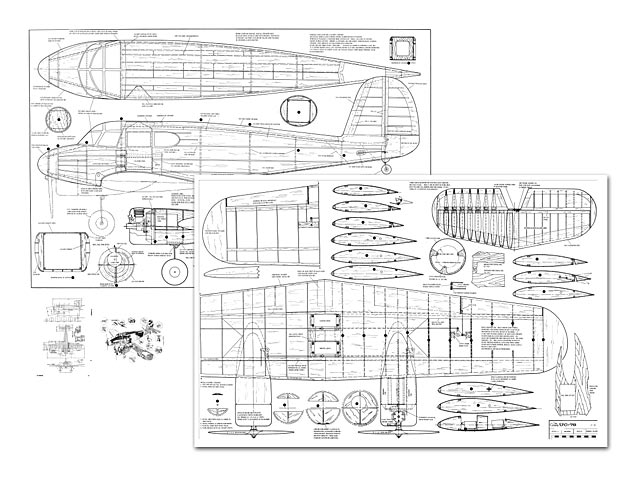 Quote: "As you took your first glance at the Bobcat you probably wondered what kind of a nut would spend all that time working on such an ugly duckling. But if you stay with it long enough, you will feel as we do - it's so damned ugly that, in real truth, it has a beauty all its own.

The model is an excellent flier with only one major vice - it does like to drink fuel! If you start a UC78 of your own, get a gallon of fuel now!

There is no magic secret in the design of the model. The Cessna engineers took care of these when they designed the full scale T-50 in 1939. The only deviation from scale is the fabric covered wing being replaced by conventional RC wing construction for greater durability, plus the substitution of a modified NACA 2417 airfoil. The ship is extremely stable and responsive, and to date, without vices. We are most emphatic in recommanding the use of contra-rotating propellers to cancel the torque effect. With two 35's screaming away, this torque could be a real problem - if not disastrous. Models to date have used K&B 35 R/C mills with the left hand engine equipped with a reverse ported crankshaft (usually available from the manufacturer).

Propellers used were Tornado 10-6, right hand and left hand. Prototypes #3 and #4 are now being built. #1 met its demise at the 1963 Indian City meet in Detroit when the elevator pushrod went out with the engine in high speed! #2 is in mint condition and was recently displayed at the 1964 Fresno, California Open contest. While we do not recommend the Bobcat for the beginner, the average sport multi-flier can fly this ship without any difficulty if he has any degree of faith in his flying ability.

Very few problems are encountered in constructing the model. The fuselage is large, but light. The wing is no more difficult than the average contest multi wing with the exception of the two nacelles that are built-on after the basic structure is finished. DO NOT increase wood thickness anywhere in the model as this is the only area where you can keep the weight down. (Come to think of it, you'd better get some more fuel!).

The eight ounce DeBolt metal clank tanks should have 3/8 in trimmed from their length so that they will fit between the firewall and sheeted wing leading edge. DO NOT cut into the leading edge to install standard tanks, as this will seriously weaken the beam strength of the leading edge box structure. Assembly of the nacelles starts with the installation of the main vertical plywood keel..."

Update 20/12/2013: Replaced this plan with a full version showing all formers and ribs, thanks to JJ.

Update 08/08/2017: Replaced this plan with a modified version which shows fuselage datum line and CG location, thanks to zipman, davidterrell80, rchopper56. 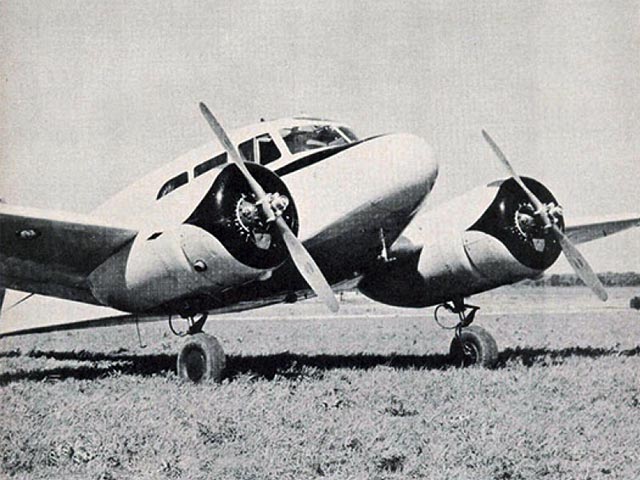 Have gone electric with all my small planes. Have some plans that shows R/C modeler Cessna UC-78, designed by Bob Morse, drawn by George A. Walker. Looks identical to the plans you show. The plans I have are quite old. Are these the same? I am interested in getting another set of plans if they are the same model. I want to use two Power 25 E-Flite electric motors or two Power 32's. Have no instructions or wood requirements other than what are shown on the plans.
Does anyone make a laser-cut kit that you know of. This was my dad's first multi-engine trainer in 1942, before going into C47's and B-17's during WWII.
James Trost - 20/04/2020
Add a comment