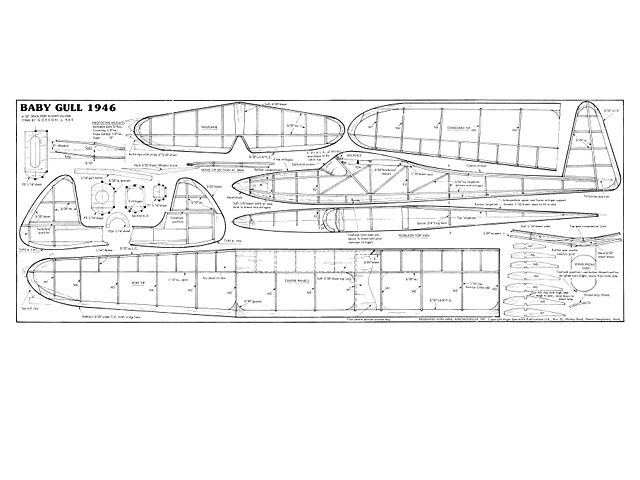 Baby Gull. Free flight gull-wing glider, first published 1946. This is a re-print in an article from Aeromodeller April 1987, in which where the original designer builds it once again, 40 years later.

Quote: "I sat there, a sixteen-year old, contemplating the dog-eared remains of my Minimoa (oz1033) glider. Although it didn't look too good now, following a number of unscheduled arrivals, this forty-inch Keil Kraft kit had given me some good flights; but the time had come to build a replacement and despite the stability problems I had experienced with the gull wing layout, I did so like the graceful sweep of their lines; so a gull again it would have to be.

It was from these beginnings in 1946 that the Baby Gull was born. The main criteria dictating its general layout were that its lines should please my eye and that the model should provide information to enable the construction of a larger version at a later date.

The original Baby Gull has long since passed away so for the purpose of this Aeromodeller project a replica was constructed over a copy of the rather tatty original drawings.

The general construction is quite straightforward, but there are some small sticks in there, so care needs to be taken. The effort, I think you will agree, will have been worth while when you finally look upon your version of this attractive little vintage glider.

Fuselage, fin and tail: Just the main points will be covered, together with areas of special note. Use good medium hard strip for the fuselage longerons and construct an identical pair of sides, allowing glue to set thoroughly between operations.

Proceed by joining sides together with F2 and F3. Follow this by pulling in the nose to Fl; then taper the insides of the longerons at the tail end and glue together. Now fit all cross pieces to top, front and underside before pulling together the top at point X and glueing..." 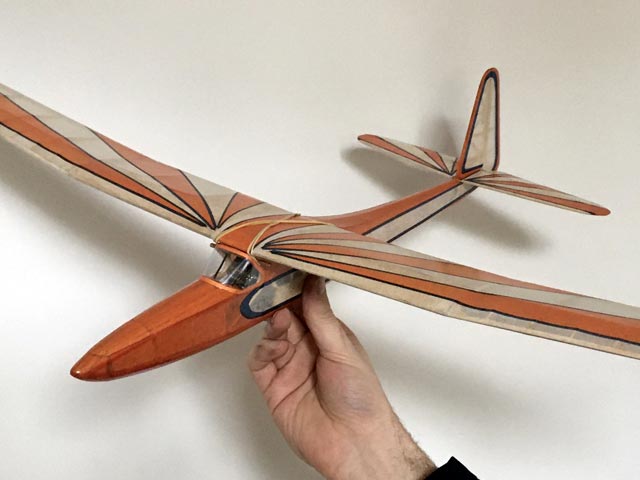 The pattern for wing rib W7 is too short. The right-hand side of the wing centre section needs to be stretched by 1/4 inch. It helps to keep the aerofoil section if the front of the wing trailing edge is raised by 1/32 inch. I have finished the model with type B fin, and a DT fitted. Regards,
Stewart - 11/09/2015
I have built the bones for the Gordon Rae Baby Gull from the plans on your fantastic site [more pics 006, 007]. I've modified it for r/c and have used the polyhedral wing detailed on the plan as opposed to the gull wing arrangement, in the hope that this will make the model turn better when under radio control. Other minor modifications have been plywood dihedral braces at all dihedral breaks and a small nose hatch for battery access held on with pins and a magnet. I'm aiming to get it all covered with tissue in the next few weeks and will send you photos of the finished job. Incidentally, the model was built on the small cork board seen in the photos. It's a fiddly build with the five piece undercambered washed-out tapering wing but it can be built in a small space and the structure when completed is very elegant. Keep up the great work with the site, I check in daily!
PeteT - 26/10/2018
Dear Steve and Mary, Please find attached a few pictures of my cosmetically complete Gordon Rae Baby Gull glider [main pic, more pics 008,009]. I promised you photographs when I finally got around to covering it and am pleased to say that despite prevaricating for a long period whilst I enjoyed staring at the bones, I managed to eventually break out the tissue and crack on with it. The finish is Peck white tissue as a substrate and Esaki for the coloured sections. Cellulose dope was used to seal the finish. I still have to install control horns and hook up the pushrods and the tail surfaces are only balanced/tacked in place for the pictures but I have hope that, Coronavirus notwithstanding, I can provide you with a flight report soon. All up weight without ballast is 74.5g (2.63 ounces) but I anticipate needing about ten grams in the nose to balance it.
PeteT - 18/03/2020
Add a comment