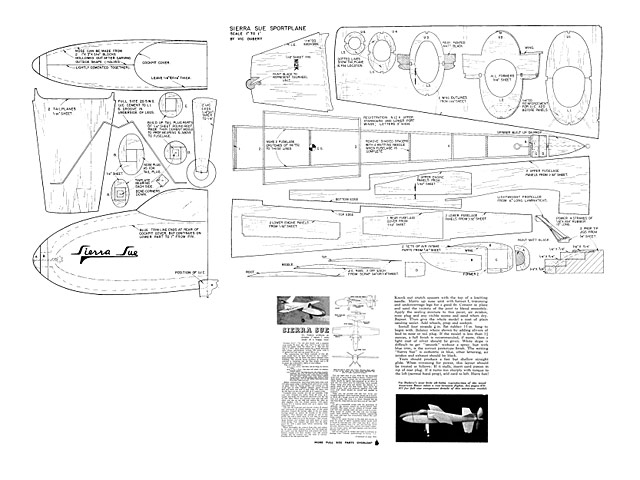 SIERRA SUE, I'm sad and lonely - said a popular song nearly 20 years ago. You won't be sad with this cutie nor lonely when the others see it. The full size Sue is a 20 ft sport plane project by a small American firm whose specifications include 500 miles with a 15 gallon fuel tank and top speed 200 mph.

The construction and finish methods of this all-balsa model have not been devised for the 'quicky' balsa-butchers, but for those who derive pleasure from building. The unusual layout produces an interesting exercise in trimming, but she flies alright and is fit to grace any enthusiast's stable of one-inchers.

Before construction, sand sheet balsa both sides with 00 glass paper using a sanding block until all saw marks are gone. Start by tracing outline and cutting out the WING and JIG RIBS. Slightly dampen upper forward half and lower rear half of each wing. Pin down over jig ribs then cut out FIN and add 1/16 square strips.

Carefully trace, transfer and cut out FORMERS. Take your time. Cement any splits. Strip off some 1/16 square and build two FUSELAGE CRUTCHES over the top of each other. When dry, separate from plan and each other, put one on one side and replace the other on plan together with two shaded spacers. Add upper formers (U) at stations shown and 1/16 square strips along their tops.

Cut out the FUSELAGE and ENGINE PANELS (9 pieces) and TAILPLANE (2 pieces) making sure of the grain direction. Cement the bottom edges of the two upper fuselage panels up against the outside of the crutch longerons. Now dampen the outside of one of the panels and wait a short while. It will then be possible to curve the wood over to fit the formers. Then cement along formers and stringer and hold panel in place while drying. Now dampen and check that the other panel fits with a good seam before cementing. Add engine panels.

When thoroughly dry remove from plan and replace by the other crutch making certain that the longerons are exactly over the shaded lines and cement the lower formers exactly over their stations. Now add central stringer and fin making sure the latter is vertical. Proceed as for the previous half.

Cut out eight slats of 1/4 in sheet for the laminated NOSE UNIT or carve from block as shown. Cement 1/4 in sheet firmly together except the two innermost pieces, which should be lightly tack-cemented as we have to split into two halves later for hollowing. Carve outside shape, using nose plug and former one shapes as a guide, sand, but do not final finish. Split, carve the inside to 1/8 in wall, and recement together with NOSE PLUG unit which should be carved and sanded to conform.

Make two AIR INTAKES and one TAIL PLUG unit (roughly finished). Make laminated PROPELLER as shown, or finish off a bought sawcut one. Bend UNDERCARRIAGE wire and make legs from 1/4 in sheet. Discard the jig ribs from the wings and you now have a set of 'pre-fab' parts.

To get a reasonable FINISH with the minimum of difficulty, the process should be started before final assembly. Mix equal part by volume of French chalk with half your sanding sealer and give a coat to every-thing except air intakes, tail plug and rear fuselage panel. Sand carefully, wherever possible, supporting the wood with finger tips immediately behind the part being sanded.

Return the upper fuselage to the plan and secure in place by means of lightly stretched rubber bands held to bench by drawing pins. Add wings (tips 1-3/8 in above bench) and tailplane (tips 2 in up), rear fuselage panel between. Remove from plan, cement well along longer-ons and former joints and hold together with the lower fuselage half until dry. Add tail plug and air intakes and sand to conform to fuselage lines..." 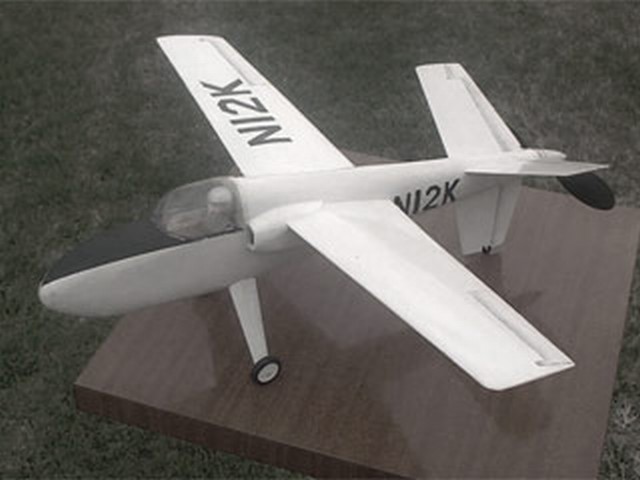 Amazed to see that my model appears as the photo! Built it about 8 years ago. Have also built his Jodel. Neville in New Zealand.
Neville Mines - 18/10/2019
Add a comment