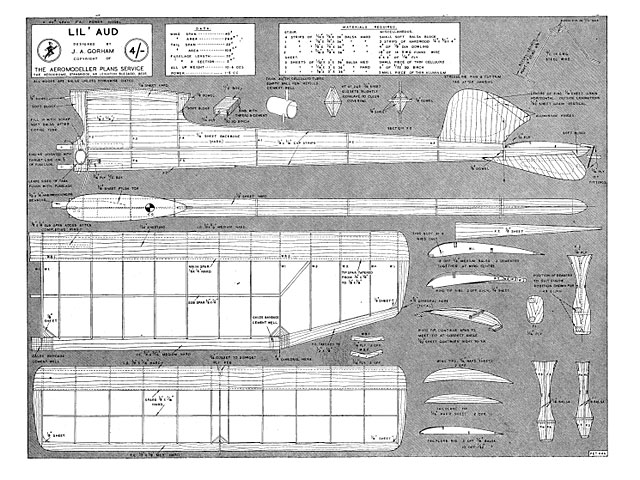 IT was only about one week before the International Power Contest at Radlett that the writer suddenly realised that normal power duration models were not performing really well, loaded up to 18 oz (minimum weight for 2.5 cc), and also that they sustained heavy damage in a bad landing at this weight, so it was decided to design a plane especially for 1.5 power and weight loading. The 1.5 cc engines produce good power for weight, and one of these was chosen, which produced a reasonable climb at the minimum weight of 10-1/2 oz.

Obviously so that the glide would not suffer, the area should be as much as possible and for 10-1/2 oz (FAI wing loading) one is allowed 380 sq in of total area. To be on the safe side, 376 sq ins were plotted out (projected area) and as the writer normally uses about a 40 per cent, tail this proportioned 268 sq in wing and 108 sq in tail.

The fin has been built integral with the fuselage for obvious reasons - too many pylons have spun in through tailplane location wearing slightly, thereby moving the fin. This method was first tried on the author's Ghost Wakefield and will probably be used on all future machines. Another obvious advantage is that the tipping of the tailplane is so easily managed (this by the way, is over the generally accepted 30 degrees as so many machines have been lost with this amount of tip).

Building should present little difficulty to the type of flier who will build this design (it is a little tricky on high power) and the only point which might need elucidating is the tank arrangement. The fuselage should be completely finished up as far as F.2, then the piece of celluloid for the periphery of the tank should be rolled up and inserted between the bearers with the two tubes cemented in. F.1 should now be affixed to the sides of tank and sanded off until flush with the fuselage, after cleaning out, the two sides can be cemented in and soft block filled in around the tank to produce the correct outline. One very important point is that a pin hole must be made at the side of the tank at the top to facilitate filling and prevent siphoning of the fuel when the engine is running.

The engine should be set at about 3 degrees down-thrust, this is important for without downthrust, the tail would have to be set at such an angle to prevent looping that there would be little or no longitudinal stability. The C.G. position must be adjusted with ballast and the tail packed positive or negative (actually about 3/32 positive should be correct), until the machine just 'avoids looping on straight trim, but don't forget the downthrust.

With regard to the turn on the climb and glide, this may be achieved in many ways. Right thrust and slight left rudder is a safe combination when climbing to the right but is not the most efficient. The most efficient trim (if it can be obtained) is usually, climb left and glide left - this trim is often 'knife edge' (so go easy with the left thrust) - actually one must use at least 6 degrees combined with wash-in on the port tip and slight right rudder. With a good engine the machine should reach about 450 ft on 20 secs and be good for a maximum in anything but down-draught conditions. Good luck and good flying!" 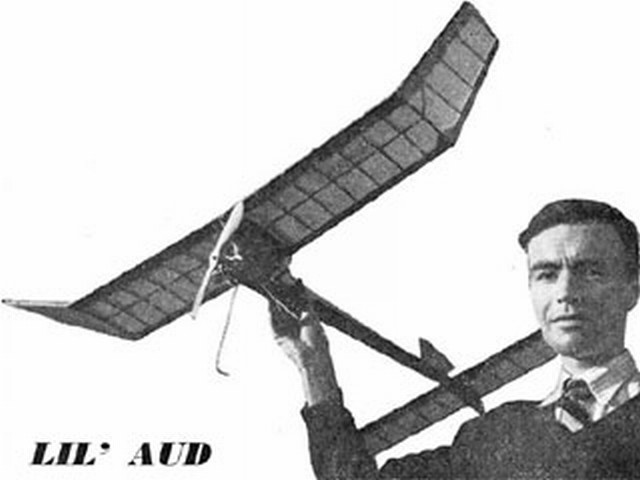