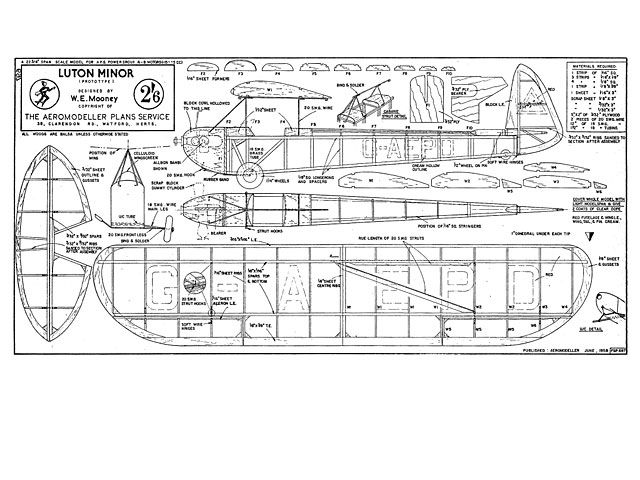 Quote: "Continuing our international quest for nothing but the best. Smallest in our scale plans range, this 23 inch ultra-light flies just like the real thing with the new miniature engines. Luton Minor (prototype), by Walt Mooney.

THIS LITTLE high-flying ultra-light aircraft is already a modeller's favourite and is likely to become more of a household word as years go by, for we learn that plans and perhaps kits for building the full-size aircraft are shortly to be available in England through the newly-formed Phoenix Aircraft Co.

G-AEPD was the prototype, as distinct from the one represented by our larger 42-1/2 in span APS scale model Luton Minor (oz397) for 1 cc by Eric Fearnley, and has differences in the wing strutting, tailplane profile and undercarriage. Famous Californian modeller Walt Mooney chose it originally for a subject for a rubber power scale, but put it to one side when he discovered an extreme lack of useful propeller clearance.

Bambi power. Eventually, when the Allbon Company introduced the miniature Bambi diesel his dream was realised and the prototype model is now approaching three years old, has had two re-coverings and is a veteran of many many flights. Introduction of the Cox Pee-Wee .020 cu in glowplug engine in the USA now makes this a design of popular appeal and with its simple straightforward construction. the Minor prototype will be a favourite with all the baby motor fans.

Due to its small size, Walt found that it was impossible to completely eliminate dihedral as on the full size, but this is just about the only concession made to true scale apart from the engine which, of course, on the prototype was an inverted Vee-twin JAP motorcycle unit.

The dihedral problem can be eliminated perfectly by means of transparent pylon at the centre strut, but it is thought from the appearance point of view, introduction of actual dihedral is the lesser of two evils.

One must select the material carefully choosing lightest possible grades of wood for all components in order to reduce the all-up weight to an absolute minimum. The high lift thick section wing and fine pitch required by these tiny engines will mean that the actual airspeed is extremely low and very much in keeping with the 75 mph airspeed of the full-size.

As can be seen by the photo on this page of the two Bambi-powered prototypes, the Minor is a most attractive shape (many say that the prototype was far more attractive than the later versions) and for colour scheme we suggest red fuselage and wing leading edges with cream wings, tail and fin and the red 'Safety First' triangle on the vertical tail surfaces as seen on G-AEPD. " 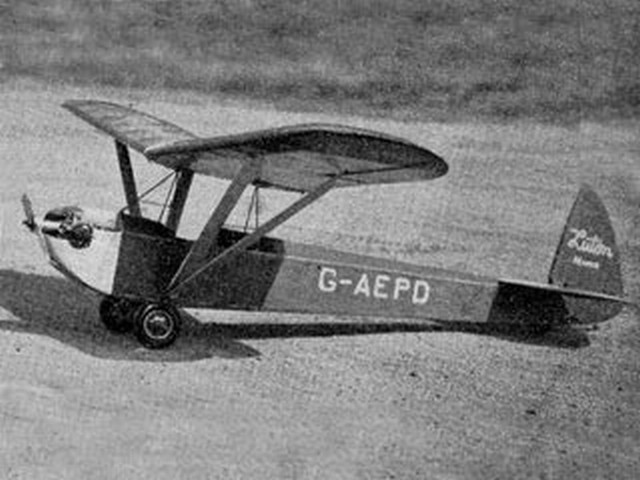 Hello Steve, With all these plans on your site I looked up Luton Minor’s and found this nice (Model) plan of one. Just to add some comment about this design, it is an LA3 Luton Minor and is not an LA4 as some may think it is. If you look at the tail plane shape and rudder shape plus the U/C design it tells you it is an LA3 which followed on from the LA2 which believe it or not looked like a Flying Flea with front and rear wing design. There was also the next version’s called the LA4 and after WW2 it was upgraded and called the LA4a with increased engine power from 36 HP to 55HP. Cheers from down under,
GaryB - 27/01/2015
Hi Steve, Oops, I forgot to add as of interest that the LA3 design of the Luton Minor only had the “V” type lift struts; all versions after that had parallel lift struts with cable diagonal bracing. This just helps to confirm what model the builder is building.
GaryB - 27/01/2015
Add a comment