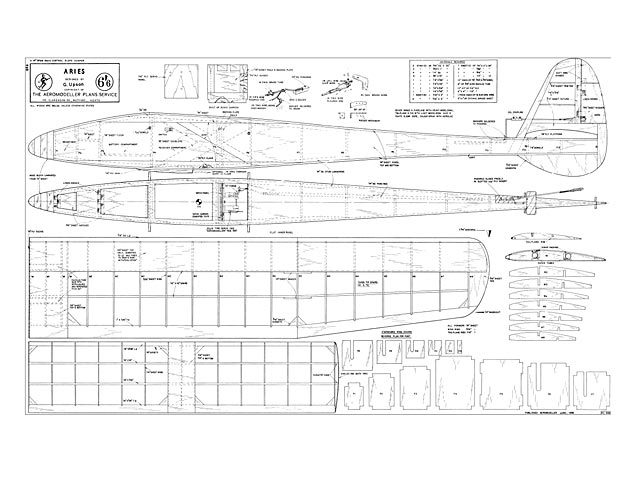 RADIO CONTROL FLYING first stirred my interest early in 1957 and having little actual radio knowledge I felt sure that useful experience could be gained by installing such equipment in a glider. Slope soaring was the obvious method of obtaining flights of any duration, and knowledge gained flying an APS Archangel (oz3935) with radio at 2-3/4 lb weight eventually led to the design of Aries.

The prime design factor for slope soaring is good wind penetration, and for this reason a flat-bottomed wing section is used giving the model a fairly fast flying speed. Other components are orthodox, the tailplane area being 25 percent of the wing, the moment arm three wing chords, and the dihedral 10 percent. Tip dihedral is used in order to simplify the two-piece wing joint.

The fuselage was made as strong as possible and designed around the Hill receiver and Mighty Midget Servo unit which means that there is plenty of room for any conventional system.

Single-channel control with rudder only is employed, utilising the Laurie Ellis Canadian Actuator, described in the February, 1957 Aeromodeller. This provides selective control, i.e., one signal gives left, two right, or vice versa, with automatic return to neutral on release of the signal. Sellotape was used for the dead spots on the gear wheel which provides a means of finding their best position.

Construction. Building is straightforward, but the following points should be noted. Washout in the wing should be incorporated when building. Fuselage top sheeting is added after installing the control rod. It is essential that the rudder control linkage operates quite freely. No centring springs are used on the rudder control surface as servo motor overrun is negligible.

Flying. Trim with CG between 50 percent and 55 percent of wing for straight glide below the stall using the rudder tab and tailplane packing. If you move the CG further back than 55 percent, flight becomes undulating in stall recovery. Trim as above is standard for winds of up to 10 mph; for stronger winds move the C.G. forward and adjust tailplane..." 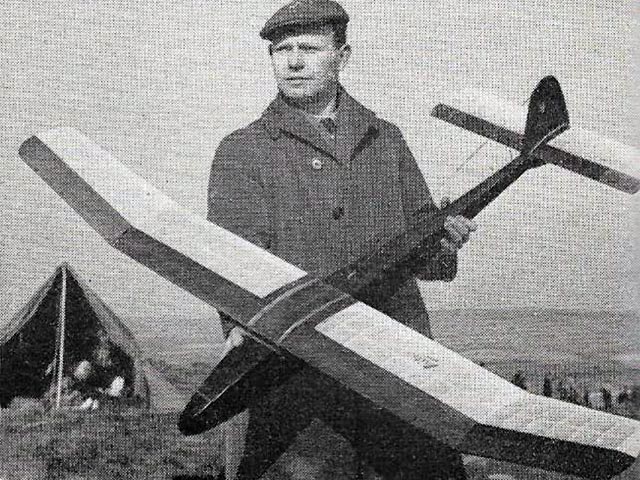 The Aries became the standard slope soarer on the Rodborough/Selsley slopes near Stroud in the early '60's. Attached is a photo of John Bond in 1966 carrying his twice size version [more pics 005]. John equipped several large models including this one with Super 8 cine-camera and took some impressive aerial films. This particular Aries was definitely a calm weather flier and had a propensity to fold it's wings in a tight turn! I had almost as much fun flying a free flight Aeromodeller Slope Rhino which I can thoroughly recommend. Kind regards,
Richard Falconer - 12/02/2020
Hi, just found the Outerzone and delighted to see information and photos of Aries which was my first RC model, bought complete with homemade Galloping Ghost installed. I was 15 at the time [more pics 006]. Great model and introduction to slope soaring in 1970, some 50 years later I still love soaring!
AndyG - 13/02/2020
Add a comment