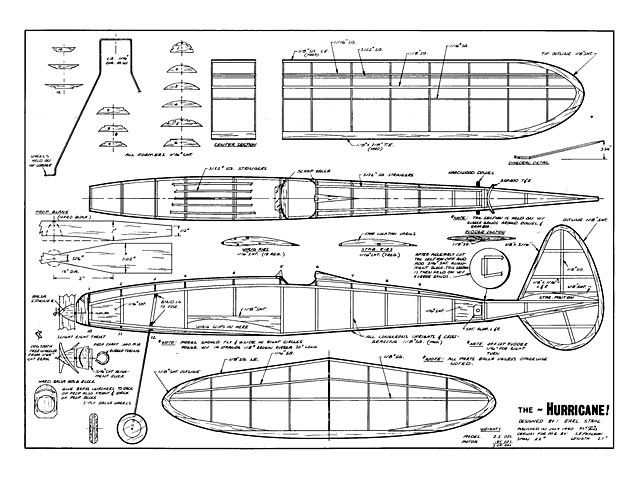 Several months ago, we ran a picture of a couple of Earl Stahl 'Hurricanes,' and mentioned that we would publish the plans in a future issue. A short time later, we received a letter from Earl, in which he enclosed new prints from the original photos taken for the construction article first published in the July 1940 issue of Flying Aces magazine. One is that famous shot of Earl, seemingly pointing in the direction the Hurricane will fly, as he launches it.

Earl Stahl is primarily known for his extremely well designed and built rubber powered scale ships. Flyline Models has just recently started to kit some of these. However, his sport designs, the Hi-Climber (oz2706) published in August 1939 Flying Aces, and the Hurricane, have been outstandingly popular over the years.

When we built ours, back in early 1941, we chose to keep the complete fuselage, including the small tail piece, in one unit, leaving the bottom panel just ahead of the rear dowel open, for access to the rubber motor Earl cut the tail piece off, using rubber bands around bamboo pins and the dowel pin to hold it in place.

Flight instructions called for sliding the wing back and forth to obtain a proper glide, adding weight to nose or tail if moving the wing was not sufficient. Balance point was not specified, but right turn under power and in the glide was strongly recommended. Ours flew this way, with a 1/16 shim under the bottom front spar of the wing, to increase incidence."

Update 07/09/2012: replaced this plan with a clearer version, thanks to theshadow. 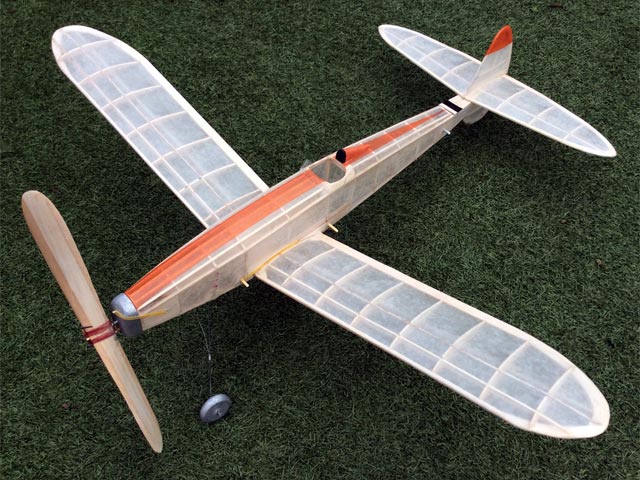 Good day Outerzone, Firstly, thank you for the amazing service you offer the modelling community. Outerzone is an invaluable source of information for any true model builder!
I have recently finished building Earl Stahl's Hurricane (oz198). I thought the attached pictures would add some attractive colour to the otherwise black and white page [main pic, 005-008]. I have also produced a build video of the model which you might like to include a link to. The video can be found on YouTube at https://www.youtube.com/watch?v=ZtQDanNJcOM
Many thanks and best regards,
Matt Hirst - 17/06/2020
Add a comment