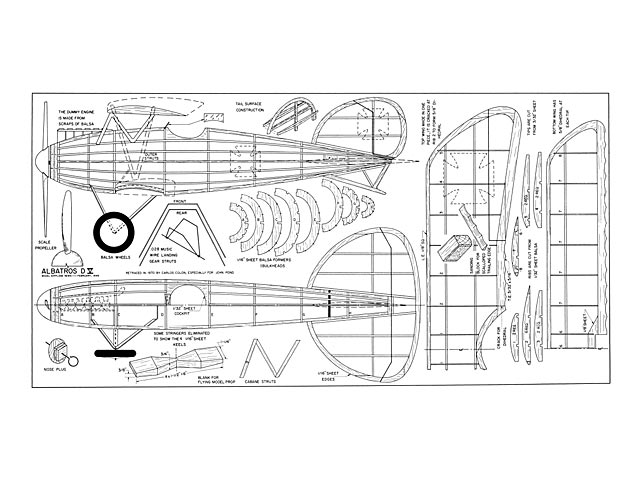 Quote: "Perhaps the best known of the Albatros scouts was the D-3 of 1916-17 and the later model D-5. The D-5 had a 225 hp water-cooled Mercedes engine and a speed of 140 mph was credited to it. This was remarkable speed for a fighter of that day and somewhat alleviated the plane's disadvantage of reduced maneuverability caused by its considerable weight. The operating ceiling was more than 18,000 ft and it could attain the first 10,000 ft of altitude in 13 minutes. Useful load of the craft was 517 pounds.

Most unique feature of the ship was the advanced aerodynamic and structural characteristics of the fuselage. Sleek and shaped like a fat cigar, the body was of three-ply wood construction. Except for the exposed cylinders of the engine, this presented clean, unbroken lines to the slipstream and undoubtedly contributed to the overall efficiency of the craft. Wing and empennage were of conventional wood and cloth construction. Wingspan was 29 ft 8 in, and length of the plane 24 ft.

Interest among model builders in these old planes has always been great so we take considerable pleasure in offering a trim little flying scale model of the famous Albatros D-5a of 1918. Proportions of the prototype make it ideally suited for reproduction in the form of a flying miniature. If carefully constructed from the plans and instructions presented here, the builder will find he has a model that is not only an excellent flyer but a picture when on display.

Conventional construction methods are employed throughout but be sure to follow the plans closely and read the written instructions. Balsa wood is preferable but white pine may be substituted if the lighter wood is not available. Colorless model airplane cement is used as adhesive to join the parts.

Construction of the two wings is a good start. Ribs are shown full size and the number of each type indicated should be cut from 1/32 sheet; note that three of No.6, ten No.7 and two No.8 are needed. Cut the ribs with accuracy and sand them smooth. The trailing edges and tips are cut from sheets of 3/32 thick stock. It is not difficult to reproduce the scalloped effect found on the trailing edges of the real ship's wings. Make a sanding block as shown in the sketch and lightly sand the wood to the required shape. Only the right half of each wing is shown. It is best if a whole wing plan is made so the parts may be assembled right over it. Leading edges are 1/8 sq strips and the spars are hard grade 1/16 sq.

Assemble the parts carefully using pins to hold them in place until the cement hardens. The lower wing is cracked in the center and
the tips raised 5/8 in for correct dihedral. Tips are raised the same amount on the top wing but the dihedral breaks are at the first No.2 rib from the centerline; remember to cement the breaks firmly. Be sure to shape the edges and tips carefully so a neat covering job can later be made.

The manner of fuselage construction calls for the use of four keels cut to shape from 1/16 sheet. To obtain their patterns trace the top, bottom and side outlines of the body. Bulkheads, likewise 1/16 sheet, are cut in accordance with the patterns given. Cut only the notches shown leaving the others to be cut as a later operation; however, their position
should be marked as reference..." 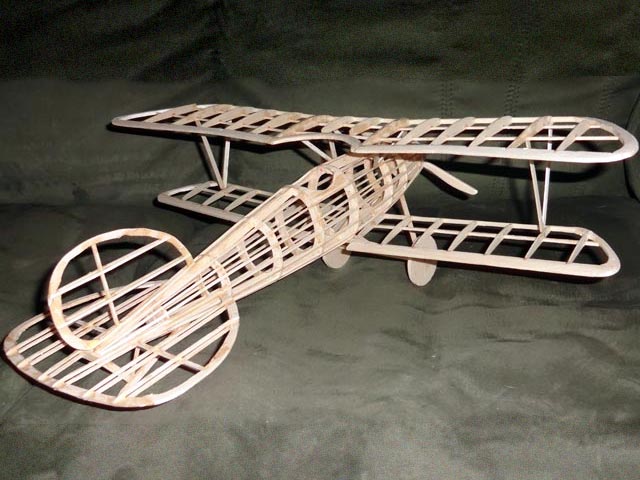 Added some nice colour photos of his Albatros model, thanks to johnasmith.
SteveWMD - 13/02/2013
Add a comment