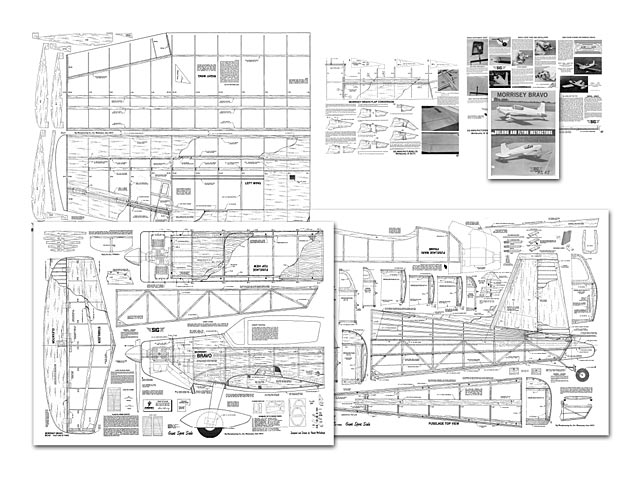 Quote: "Since I had built a model of the Morrisey/Shinn/Varga 2150 and been impressed with its superb flying charactestics, when I came across the Morrisey Bravo on display at the 1983 EAA Fly-in, it caught my eye at once. The camera came out and recorded those nice looking lines. To cut a long story short, the 1st prototype of this kit rolled out of the workshop the following spring. Like the 2150, it proved to be an easy to fly and good-handling model ...the model is slightly larger than 1/4 scale, to arrive at optimum accessory sizes..."

Quote: "Hi Mary, Guess what? I found the 'Changes and Additions' for the tail modification for the Morrisey Bravo!! I located a late model kit, mid 80s version where Claude Mc. revised and strengthened the tail from SIG's flight testing. This discovery blew me away. Respectfully, John"

Quote: "Products in use. The Sig Morrisey Bravo. By Bruce Tharp. New from Sig, this Quarter-Scale model of the Morrisey Bravo was designed ny Claude McCullough. It's an excellent kit, and a great flyer. The author should know, he works for Morrisey Aviation!

It was over a year ago when I first heard that the Sig Manufacturing Company was flight testing a quarter-scale model of the Morrisey Bravo and that it might eventually become a kit. I was naturally excited because at the time, I was preparing to join Morrisey Aircraft Corporation, manufacturers of the full-size Bravo. While doing this kit review, it was quite a treat to work on the real airplane all day then the model when I went home!

FULL-SIZE BRAVO HISTORY: The Bravo was designed by my employer, William J 'Bill' Morrisey, and first flew on lune 30, 1981 at Oceanside Airport in California. Bill's design experience, and the history of the Bravo, dates back to 1947 when he built the wooden-winged, 65-hp Morrisey Nifty. The wing, tail, and aft fuselage were redesigned in aluminum, and in 1955 the 90 hp Morrisey Model 2000 was built and type certificated with the FAA. Later, Bill decided to make some alterations to the airframe and install a 150 hp Lycoming resulting in the Morrisey Model 2150 (Model 2000 plus 150 hp) which was type certificated in 1957.

Morrisey Aviation in Santa Ana, California produced 10 Morrisey Model 21505 during 1958-59. In 1961-62, a company named Shinn manufactured 35 Model 215OAs under license from Morrisey. Later, Bill sold the rights to the 2150 to George Varga who produced about 200 airplanes as the Varga Kachina. A few Kachinas were fitted with 180 hp engines and changed into taildraggers.

In 1981, Bill decided to build the Model OM-1-2 (OM stands for 'One More' airplane, -1-2 means one or two seats). The Bravo is actually an outgrowth of the Model 2150, but incorporates all of the changes and improvements that Bill has been thinking of over the years. The Bravo fuselage and fin are all welded steel tube covered with fabric aft of the cockpit. Removable aluminum side panels extend from the cockpit forward. The wing and stabilizer are aluminum. The airfoil is an NACA 43015, which is duplicated on the model.

The Bravo actually flew first as an open cockpit, single place. Later, an enclosed cockpit, wheel pants, and spinner were added to the single place to give it a real 'fighter' look. After that, the windshield was moved forward. This is the version modeled by Sig. You may be interested to know that a four-place Morrisey aircraft, the Padre, has been designed and is being built. The Padre uses many of the same structural components as the Bravo.

MODEL BRAVO HISTORY: Many years ago, Claude McCullough built a very famous model of a Shinn 2150A, so he was well-acquainted with the Morrisey design. When Claude saw the Morrisey Bravo at the big Oshkosh Fly-in, he knew he just had to build a model of it. Several rolls of film and requests for dimensions later, the model was designed and built. Claude says the model is actually slightly larger than quarter scale to arrive at optimum accessory sizes.

The model was not designed with flaps, but the enterprising modeler would be able to add them if he wishes. The fin on the model was originally a built-up structure, but after the Sig pilots apparently suffered some flutter in that area, a modeling version of an Airworthiness Directive was issued and all builders should have been supplied with a new, solid fin. Of course, the kits are now being supplied with the updated fin.

Even though Claude's prototype model turned out somewhat heavy, it still displayed good handling qualities and the decision was made to begin production of the kit. Deliveries of the model began in February, 1985.

BUILDING THE BRAVO: Mr McCullough and his associates must be commended for their beautifully-drawn full-size plans for this model. The three large sheets are full of useful information which compliments the instruction booklet very nicely. The booklet itself is stuffed with pictures and the instructions are so complete that even beginning builders should have no problem constructing the model (though they might need help flying it).

I have not built many Sig kits, but am told that this one is fairly similar to their other designs. It is primarily built of balsa, spruce, and plywood. The ribs and formers are die-cut, while several other parts have to be cut out of thick, printed balsa sheets. The basic fuselage structure is built like a big stick model and is very strong and light. The stabilizer is built-up and fully sheeted.

The outer wing panels were designed to automatically be built with a small amount of washout. This is done by using small tabs on the front and rear of the ribs to hold them in perfect position on the building board. Incidentally, the real Bravo uses no washout, but don't modify your wing unless you are a real scale fanatic. The automatic washout is a clever idea and may provide for gentler stall characteristics than an untwisted wing.

The wing is designed to have leading edge sheeting and capstrips, which leaves a strong, light, open structure. Some modelers may want to sheet the entire wing to more closely simulate the allmetal skin of the real Bravo. I left my structure open and am quite pleased with its appearance.

The fiberglass cowl and wheel pants are supplied to Sig by Mr. Joe Zimmerman of California and are of first-rate quality. The wingtips and tailcone are ABS plastic, are easy to work with and hold the scale shape very well..." 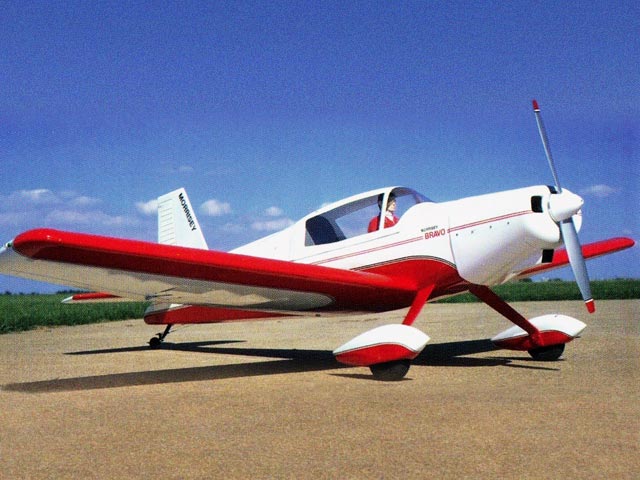