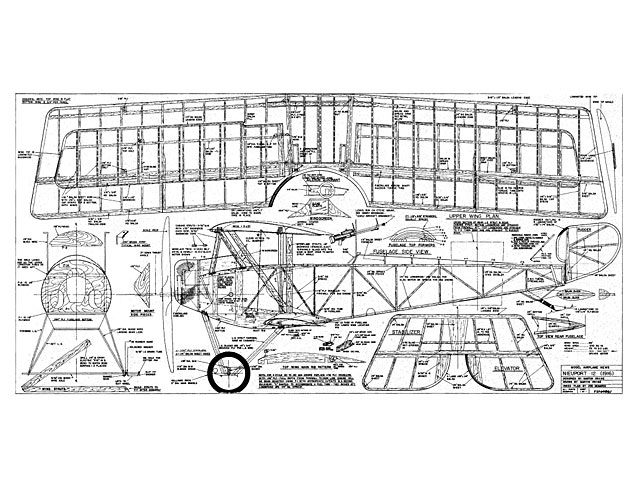 Quote: "1/5th Scale Nieuport 12, by Martin Irvine. A very accurate 68" (1730mm) span, one fifth scale model for the dedicated builder, that could be used for scale competitions or very satisfying flying.

The 1915 Nieuport 12 was a development of the earlier 1914 Nieuport 10. This was the first of the famous Nieuport sesqui-planes. 'Sesquiplane' translates literally as 'One and a half wings', that included all the single seaters until the N.28 made its appearance in 1918. The 10 was developed into the two seat N.12 and the single seat N.11 (a delightful little plane popularly called Bebe and made famous by the early French aces and the Lafayette Escadrille). The N.12 was not a dramatic success but served in the French, British, Italian and Russian airforces until 1917, finishing its service life in training squadrons.

The only original N.I 2 airframe in existence was recently restored by the Canadian National Air Museum at Rockcliffe Airport in Ottawa, Canada. It is painted in an all silver scheme that I personally don't care for. I much prefer the clear doped scheme that many French machines used.

This plan is based on the Nexus 3-view drawings available from Nexus in the UK, or from Bob Holman in the US. A better three view, (though it suggests that the N.12 didn't have a clear centre section), is in the Albatros Publication's Windsock Datafile #68 - Nieuport 10 - 12. Unfortunately, the focus of this book is on the British variants but it's still worthwhile getting.

This model came about as the result of two things. One was the success of a 38 ib span Speed 400 version I built several years ago. This was published as plan MW 2670 and reviewed in the June 1998 issue of Electric Flight International. The second was the availability of the ModelAirTech 3.6:1 belt drive and the DeWalt 14.4 drill motor as shown in EFI March/April 1996. This is a very flexible power system that allows us to swing a large prop on a reasonable number of cells. It is a little heavier than other high ratio drives and motors, but with a larger plane and its larger wing area this is not a problem. Regular servos and battery pack were used. This is not a model for micro servos!

The Nieuport 12 is scaled to use the widely available Williams Brothers 5 in Vintage wheels. My original target weight was 7-1/2 to 8 lb and the test flights were made at 8 lb. The dummy engine, pilot and gunner figures plus machine gun and mount added 12 oz for a final total of 8-3/4 lb. An important point for me was a lack of rigging, accomplished by making a cantilevered upper wing handling all the flight loads. Rigging can certainly be added if one wishes. Wing span is 68 in (1730mm) and the total wing area is 1250 sq in (81 sq dm) for a wing loading of 16 oz/sq ft (49g/sq.dm) at the final weight of 8 3/4 lb (4kg).

The DeWalt/ModelAirTech power system on 18 cells and a 16 x 8 prop will pull about 30A for an input of 540W and about 60W/lb. This represents a 'sport' level for a biplane with its high drag. Monoplanes can get away with lower power but biplanes need the extra.

One last thing before you start. Make sure it will fit in your car! I have to remove the wheels and rear gunner and machine gun in order to get the fuselage in my sedan trunk and even then, there is a precise sequence.

Tail: I suggest that you build the tail first. It is easy to build and gives you something to look at fairly quickly. I built the stab so that it is detachable but so far that hasn't been necessary for transportation. It is handy to be able to take things apart for repairs if ever needed.

The rudder has a laminated outline that is very strong and well worth the bit of effort do make. The removable hinge is outlined on the plan and results in a strong and very smooth attachment.

Top Wing: The top wing uses the same airfoil as the Proctor Nieuport 11 and Antic. I like this airfoil because it works well and looks the part. A scale airfoil would be heavily cambered but thin. The Antic airfoil has a similar top-surface curvature but is thicker. There is just enough undercamber to give the correct atmosphere on a WWI model and still isn't too difficult to cover.

The bottom wing airfoil is a Clark Y. On the original aircraft, the lower wing was really just a streamlined spar to provide a bridge structure for the wing bracing. On this model, the two lower wing panels plug into the fuselage and all the lifting forces that act on them go through the struts to the one piece cantilevered top wing.

Start by building the top wing main spars. They have balsa cores and 1/8 x 3/8 spruce tops and bottoms. Use a level table and a straight edge to make sure they remain straight while the glue dries. All ribs are cut from the same basic pattern. Trim the centre ribs to length and cut the aileron ribs at the spar and aileron LE lines. Note that the ribs between the centre section and the ailerons have holes for the aileron torque tube. These are reinforced with 1/64 or 1/32 ply washers as shown on the drawing. The tube can be an aluminum of fibreglass arrow shaft or something similar.

Shim the spars so that the ribs are 1/16 above the building board. They will rest on the 1/16 x 5/8 trailing edge. The leading edge rests on the building board, allowing room for the 1/16 x 1/4 capstrips to be added later. Add the top TE piece, the cap strips and the laminated tip. The tip is supported by balsa extensions at the spar locations and are built to give the illusion of a thinner airfoil. I suggest you build the ailerons at the same time as you build the wing panels. You can cut the tip and trailing edge free later. Remember, though that a fibreglass torque tube will be added before the wing panels are assembled. Don't jump ahead too quickly.

The centre section requires extra care in assembly as it will be stained and covered with clear Monokote or laminating film so your workmanship will be on display. Consider staining the various components before assembly so as to avoid glue stains. The centre section trailing edge will have to wait until the wing is assembled, as the laminated part is used to connect the three panels..." 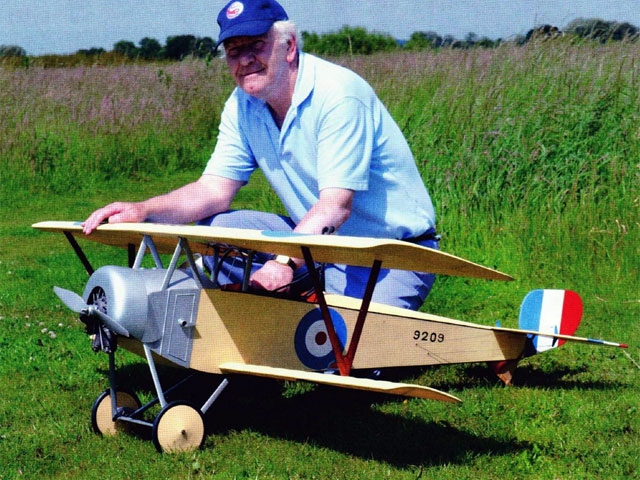