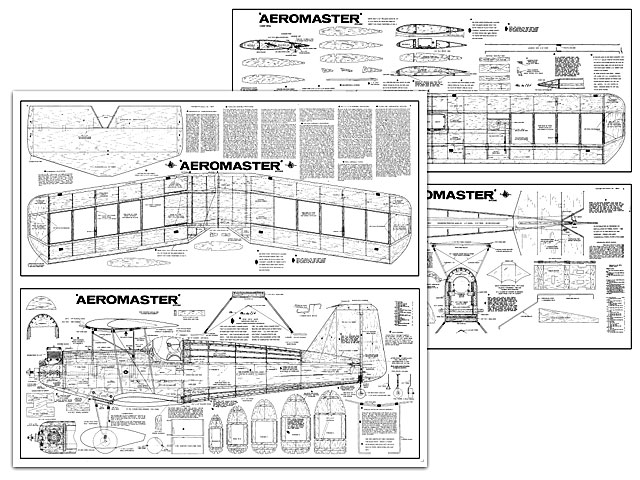 Quote (from plan): "The Aeromaster has exceptionally fine ground handling characteristics, and does not easily ground loop. The Aeromaster is a very docile and easy to fly model that can also be tossed around and made to perform almost violently, if desired. It has a very clean and semi-fast rate of flight speed and the speed is rather constant during maneuvers.

The model is extremely stable during landing maneuvers and also very responsive to all control surfaces except rudder. The rudder is most effective during maneuvers such as wing overs, spins, knife edge flight, etc. But a little slower on most maneuvers and actually you don't ever use rudder except for these maneuvers or to steer the model on the ground if the tailwheel is attached onto the rudder. Ailerons are used more than anything for most maneuvers combined with elevator and motor control. If coupled ailerons and rudder are used, allow only about 1/8 in movement left or right at end of rudder with full movement of ailerons..."

Note this here is the standard Aeromaster. See Aeromaster Too (oz1972) for the extended wing version.

Like every other radio control man, I was anxiously awaiting Lou Andrews's Aeromaster. Production problems had held up delivery quite far past its promised date but my interest never lagged which is true for most of those whom I knew were as anxious as I.

You can imagine my surprise and delight when Walt Schroder called and wanted to know if I would be his guinea pig for the Aeromaster. Didn't take long to say yes and less time to have Lou send a kit direct - only impatience was waiting for the photographer to take the kit contents picture. You have no idea how eager I was to start putting sticks together as this is a really exciting package.

Plenty of hardware, molded elevator, rudder and aileron horns are included with attaching hardware. Only items to be purchased are the modified deBolt Clank tank, wheels, 90 degree aileron bellcranks, covering material and of course the necessary glue and dope. White glue, conventional model glue and contact cement were used as required.

Walt insisted on no modeler design modifications whatever, no matter how much I felt it might improve the kit. This admonition was not necessary as this was a customary Andrews design that is engineered just to fall together. To save time, only one very slight deviation or liberty was taken and Walt had to agree that it did save time and made it a bit easier. Hollowed block fillets were substituted for the sheet-over-stringer fillets at the junction of the rudder and the fuselage.

The step-by-step photo instructions are very complete and no unusual or difficult problems were encountered in the assembly of the kit. The fuselage was the first part undertaken and it just fell together. Didn't feel that modification to the deBolt Clank tank was necessary but after trying the S/T .60 engine for size it was very apparent why we should follow instruction as fuel flow would not be correct and impossible as the fuel feed line would come out directly behind and up against the engine back plate. Modification is simple so follow instructions!

Micro Avionics proportional equipment was our choice and more than enough room was found for the servos, receiver and battery pack. The mid-shoulder mounting of the servos required cross rails and one rail is used to mount our happy plastic pilot so everything worked out for the best.

Don't try to save building time or work by not sanding the scallops into the formers between stringers as this makes the covering job so much easier and better looking.

And don't let the stringer and former construction worry you as later on you will find out just how strong the Aero-master really is.

Each panel of the upper and lower wings assemble very easily and all parts fit precisely into each notch and groove. Sheet covering is selected for correct grain and settles down over rib contours without fuss or pain and does not set-up any strains on the wing framework. Assembly time for these components is not long at all due to the fine engineering and cutting of the wood parts.

How I went about putting these parts together is not important to this story other than to say everything fit as it should. In addition it went together as the step-by-step drawings indicated that it would and all I would offer here is that you do not try any shortcuts or attempt to outthink Lou on his wood sizes, engineering or design strength. Each is more than adequate to do the job and nothing additional is required to what you feel might increase strength at any stress point in the aircraft. Lou, in his very capable way with his knowledge of model aircraft design and his use of modelers throughout the country to build and test his machines before design engineering is finalized, has eliminated all possible problem areas.

One advantage in this building project was to meet and know Lou, by phone that is, as he was like a nervous mother following her child to his first day of school. Ours was his first production kit to leave his plant and he wanted to ascertain that nothing had been left out or to chance.

After construction had been completed, wood filler was used to fill wood grain and then the covering process. Nylon was used for the wings and Silray for the fuselage..." 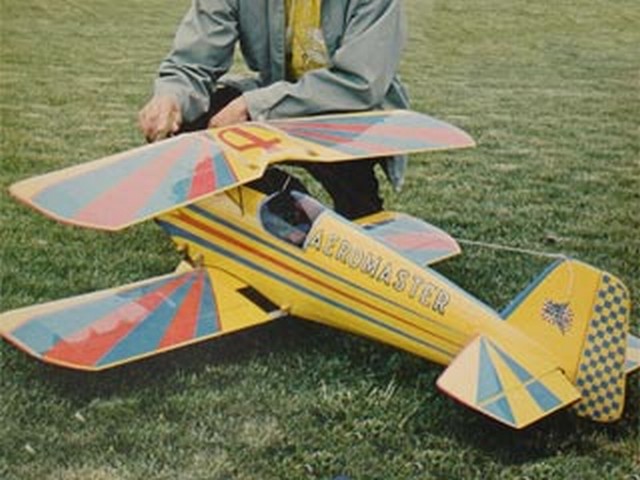 Steve, This is a picture of the original Aeromaster by Lou Andrews the designer. The second picture is of Ernie Huber's Aeromaster, this was built at the same time as Lou's Aero.
pd1 - 31/12/2012
I built one of these from the kit in 1972. It had Sprengbrook radio and a Merco 61 engine. I built the big-wing "too" variant. It was the best aerobatic machine I ever had in twenty years of model flying. Sold it complete with all my gear in 1973 to pay for the honeymoon! - BAD DECISION! Thanks for a wonderful website.
ianlambert - 19/01/2013
Built one of these in 1974....flew it thru the 1980s when a fire burned up the wings....just bought a new kit on eBay and expect it to be back flying in about a month.....a forty year old plane....always was my favorite....had a ProLine radio and an Enya 60...
RobertPowell - 30/11/2015
Add a comment