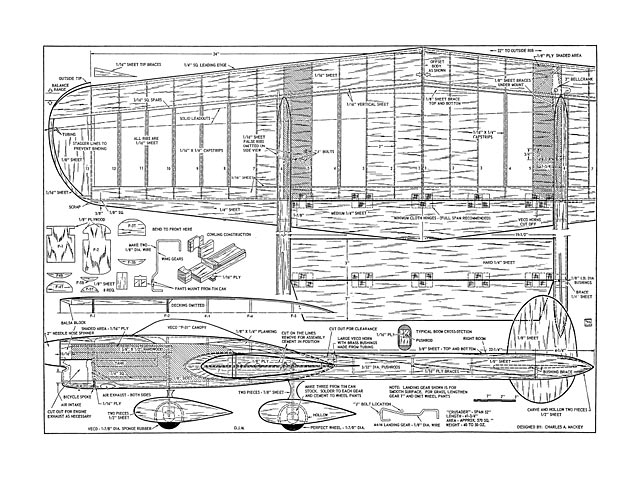 Update 24/08/2021: Replaced this plan file with a correctly scaled version, now at full size, with wingspan at 52 in. Have made a very minor revision of the incorrect dimensioning shown on the plan (24 in wing panel to outer rib, not to tip), many thanks to luislugo. Also added article, thanks to 50+AirYears.

I hope Carl Sieverling won't mind sharing the same name he used for his stuntship in the October 1959 issue of Flying Models Crusader (oz3420). At the time Carl's 'Crusader' was published, five twin-boom designs using the same name had been completed and eight to ten were under construction, so it was too late to change the name. OK Carl?

The Crusader is designed for the competitive flier who wants everything in his stunt ship plus a little more. It's not the last word as there will always be better designs to come, but it should give you all you want for your competetive stunt ship and a little more.

The appearance of the twin-boom design is different, scale-like, and appealing, so most people seem to like the appearance including judges. Judging stunt is very difficult. Try it sometime. You find that as you judge you learn what kind of a flight to expect just by looking at the airplane - if you find someone with a pleasing design that is well built and finished and you think it's tops, you give him maximum points. Then you sit back to take in the flight. You know his ship is different and well built and finished, but how does it fly? Now you have a special interest in this ship that you didn't have when you judged the rest. Naturally, you will be fair and impartial, but you're just going to watch this guy extra close to see if he is as good as his ship looks. After seeing a few maneuvers, you soon find out.

The Crusader is stable enough to make a power on landing, It will start an average sized loop from a given position on the deck, fly the loop, and land on the same spot. As far as maneuverability is concerned, the Crusader has flown the five foot radii in the bottom of the hourglass and triangles successfully. Perhaps one of the most outstanding features of the Crusader is it's ability to stay out well on the' lines. Keep your controls solid enough to stand the high pressure imposed by the wind and you will find yourself hoping for windy days. In calm weather you will do equally well on 65 foot lines with your motor four-cycling. On 70 foot lines in calm air, you should fly a little faster. Sixty-five foot lines will be your best line length for all weather flying.

John and Wilbur Schmidt, a father and son team in our area, flew their Crusader under some unusual conditions at the Richmond, Indiana meet. The ship weighed in at 50 oz and the wind was blowing at a constant speed of 18 mph. We later learned that John was flying on 73 foot lines. I've always considered 50 oz too heavy for a stunt ship with this wing area, but for some unknown reason, it turned well and still grooved. It's ability to stay out well in the wind cannot be explained by the weight because another Crusader flew equally well in the wind and it weighed 43 oz. The original was built with one eye on the scales. It weighed in at 40 oz. Yours will probably come out about 45 oz due to an improvement on the landing gear and leadouts.

The bellcrank was moved to the outside boom to eliminate tip weight. The less weight used to balance a stunt ship, the lighter and more efficient the ship will be. The 40 oz Crusader requires no balance weight at all. The 40 oz to 46 oz ship will require about 1 oz or more. We have noticed that some builders always come out heavy and others light. If you are the latter, follow the plans. If you're about average, add 1 inch between former F-1 and F-2. That will make the distance shown on the doublers 4 in instead of the 3 in indicated. If you build on the heavy side, make the nose 1-3/4 in longer. That would make the gap 4-3/4 in instead of the 3 in. This should completely eliminate the need for any ballast.

The original ship used cable lead-outs that proved fatal when they twisted. The new versions use solid leadouts, staggered enough to allow clearance of the connectors or line clips. If you can't obtain solid lead-outs long enough, splice by bending a loop in one piece of wire and put the other end through and twist a loop in it. Then bind with string and cement. This will eliminate the slack.

The landing gear is shown with 2° negative angle of attack on the wing. This was thought best for some time. One Crusader featured a positive angle of attack of about 13°. This ship would stick to the asphalt for as many laps as you held down. Take off was accomplished as controls were neutralized. This proved that you can use positive or negative and still work well. Both made beautiful landings unless the pilot goofed. The best set-up seems to be straight ahead. You can still come in tail low and pop down like the jets, or grease in on all three and retain the ability to come off easy. After' a lap or two on the deck when you are really rolling, this can be difficult with positive or a negative thrust set-ups.

Start construction with the wing. Mark off parts to be cut on 1/16 medium sheet balsa. Cut 2 of each except No.13 where only one is required. Cut the trailing edge to 1 in width from 1/16 x 3 x 36. Mark the rib positions with a square. Cement 1/8 sq to the trailing edge. Pin the ribs to bottom of 1/16 sheet trailing edge and mark the 3/16 sq spars for rib position by pinning them to a table at the proper angle. The true trailing edge position should be parallel to the edge of the table..."

Note this plan was previously listed as 48 in span. Correct span is 52 in. 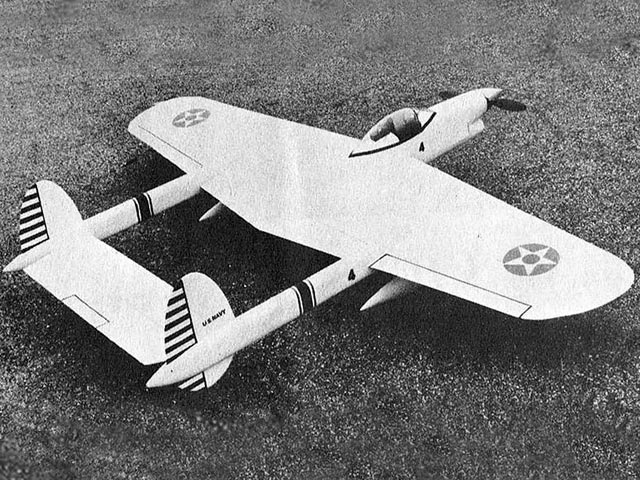