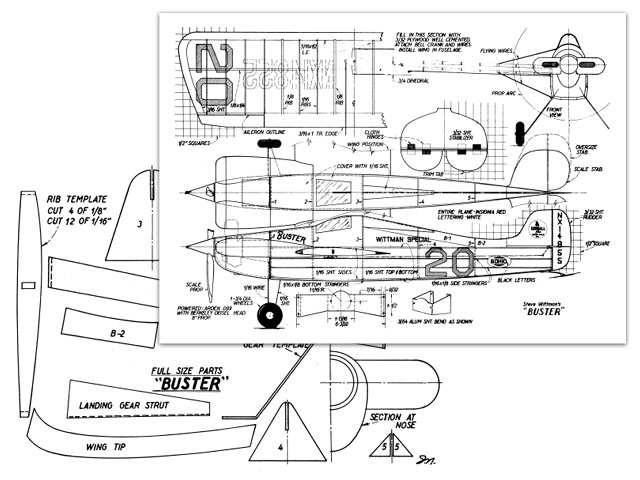 Quote: "You can be sure these plans are accurate for they were scaled direct from the original plane! Buster, by James Noonan.

BUSTER is the latest version of a long line of racers and, like many of its competitors at Cleveland, was a rebuilt prewar job. About the only thing original on Buster is the fuselage and tail; everything else was newly designed and built to fit the Goodyear trophy rules. Looking more like a model than a real ship, Buster is really tiny (the pilot is a little fellow, too!) A careful examination shows that all the care and simplicity with utility incorporated into the design, plus excellent piloting, made it unbeatable.

We visited Steve Wittman's home airport at Oshkosh, and, thanks to him, made these drawings directly from the original.

The plane is most useful as a control line model, therefore it is presented as such. The original has a span of 16 ft. Our model is built to a scale of 1-1/2 in =1 ft, or 24 in span. An Arden .099 with diesel head is used and smooth flight is obtained with a very light model. However, it should take up to .45 cu in motors with ease.

FUSELAGE: Begin by laying out full size plans, enlarging the plan on page 14 three times. The fuselage sides (1/16 sheet) extend from Station 1 to the tail post. Cement 1/16 square at all sta-tions, then join both sides holding them apart with 1/16 sq; cover top and bottom with 1/16 sheet. Thus we have our basic fuselage. Cut slots in both sides to take the wing spars. Attach motor mount and landing gear to firewall and cement firewall in place. Add bulkheads at Stations 1 to 5, then stringers, and sheet cover the top where indicated. Add 1/16 x 1/8 stringers to sides and bottom.

NOSE BLOCK: Jigsaw pieces roughly to shape and cement to nose of body. When dry, carve, sand and finish in this position. Cut off and hollow to desired thickness, cement back to nose, first installing motor. Go over entire ship adding small details, then spray or brush on several coats of insignia Red (Fokker red), adding license numbers and other details later.

These pictures show how closely Jim Noonan's model follows the lines of the big ship. The dieselized Arden engine had not been installed when these were taken."

Note this is not a full size plan. 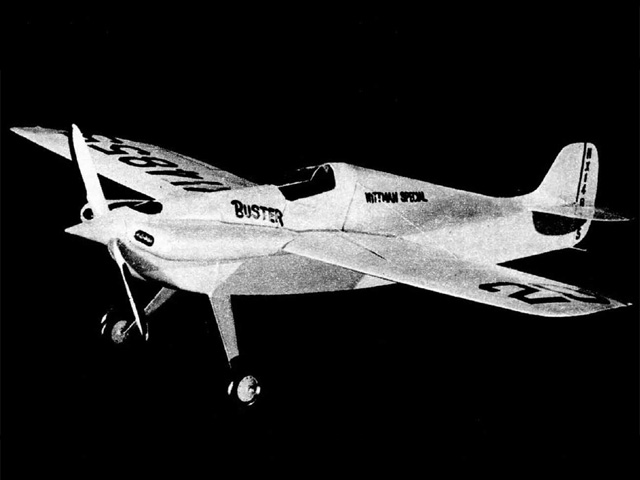