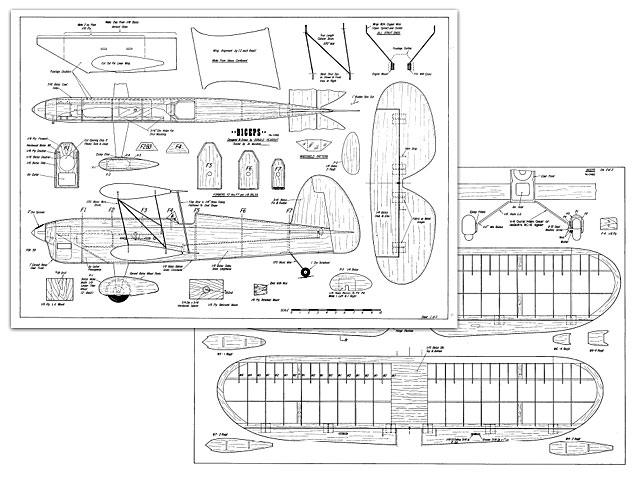 Quote: "Nearly every airplane nut has a soft spot for biplanes. There is something nostalgic about a two-winger, the whistle of wind through rigging wires and all that stuff.

When our local model club began control-line exhibition flying to stimulate public interest and recruit new club members, I became enthusiastic about a bipe for that type of flying. It would be an attention-grabber, an extremely stuntable and flashy aircraft. The ship I had in mind would be large; a small plane just doesn't get attention. The further I studied the biplane configuration, .the more intriguing it became.

It appeared that the built-in head-wind high-drag characteristic to biplanes might be used to advantage. A large engine to turn a big low-pitch prop would give a very high static thrust. In combination with the high-lift high-drag layout this would result in a relatively slow-flying, extremely maneuverable craft - like a helicopter with its rotor facing forward! And that's the way it turned out.

A few additional design features improved performance, such as: thick, blunt airfoil sections with full-span flaps on both wings to help eliminate the wobbling or staggering at low speeds common to biplanes during tight turns. A large elevator surface proved effective at low speeds. A large rudder with quite a bit of turn-out kept the lines tight at all times, since centrifugal force is not much of a factor at low speeds. There you have it.

The theory sounded good, but the proof came in building and flying the brute. Biceps is a spectacular performer, a real ball to fly. Although not a smooth, precision, contest-type ship, it should give a good account of itself in any contest in the hands of a competent pilot. For exhibition-flying, Biceps is superb, the hit of any show. It is not particularly difficult to build. Large size and straight lines contribute to simplicity. It does take a considerable amount of balsa.

Tail surfaces: Both the fin-rudder and the stabilizer-elevator assemblies are made from medium-weight sheet balsa; wood grain parallel to hinge lines. First glue balsa sheets together edgewise to obtain enough width for entire piece to be cut from. Then shape to a streamline section similar to that shown on the plan. I have found that sanding boards (sandpaper of various grits glued to a flat piece of 1 x 2 ib pine about 8 or 10 in long) make excellent tools for rough-shaping balsa wood before final sanding, prior to painting and finishing.

After rough-shaping, thoroughly sand with progressively finer sandpaper until you are satisfied with the job. Then seal the wood grain with a couple of coats of clear dope. I use and recommend Aero Glass products. They cost a little more but the quality is worth it. A couple of coats of filler should be applied next, again lightly sanding between coats. Now cut the rudder and elevator apart from their respective assemblies and sand the cut edges, rounding them slightly and follow by doping to seal the wood grain.

Now glue the rudder to the fin with 1 in of turn-out measured at the trailing edge. For the elevator, recess the edge as necessary for the control-horn assembly; I used a prefabbed unit available at most hobby stores. Cement or epoxy the horn in place. Next attach the hinges, cloth, metal, or plastic as you prefer - I used cloth. Dope over them, seal, and fill the surface. A drop of oil applied to the center of each hinge before doping will keep them flexible. The final finish coats of dope will be applied after the surfaces are attached to the fuselage.

Wings: There isn't anything unusual in their construction except for the wing-strut-attachment method, which will be explained in detail later. First cut out the ribs. You may think there are a lot of them and there are, but the close-rib spacing really looks nice on the completed ship; it serves a real purpose too. On a thick airfoil, close-rib spacing is necessary to prevent the covering from sagging, which would defeat the purpose of the thick airfoil. Cut the ribs from medium-soft 1/16 sheet balsa. I made metal templates for the W1 and W2 ribs, so I could cut out about a dozen at a time which helped somewhat.

Make up the wing spars from hard, straight balsa - 1/4 x 1 in for the front spars and 1/4 x 3/4 in for the rear. Splice as necessary to gain the proper lengths. Slide the full-length ribs, one at a time, onto both the front and rear spar making sure you do not forget the W3 center rib in the top wing and the W7 rib in the bottom one. When the ribs are in their approximate position, pin the spars down directly over their corresponding plan, blocking them up to clear the ribs with balsa scraps - 1/8 thicker scrap under the rear spar than the front. Next, slide the ribs into their exact positions and spot-glue them in place. Later you can cement more thoroughly after removing the wing from the plan.

The trailing edges can be installed next. They may be shaped either before or after attaching. I used a razor plane on the original model which worked very well. Next put on the 1/4 x 1 in leading edges after beveling one edge of each so they fit together nicely. Before trimming the leading edges to final shape (again using a razor plane or substitute), install all the false ribs
(W2, 5 & 6) in their proper positions and cement thoroughly. Make darned sure you don't forget to put in the wing strut mounting blocks (made from 1/2 in hard sheet balsa). Cement them thoroughly in their proper locations - bottom of the top wing, and top of the bottom wing.

Fuselage: Make the engine mounts first, using very hard wood (maple was used on the original Biceps). Each mount measures 3/8 x 3/4 x 12-1/8 in. Drill the mounting holes to fit the engine you are going to use. A Fox 59 was used in the first Biceps and worked out beautifully - a very powerful, dependable engine. Also drill the cabane strut in the location shown on the plan. Now mount the engine on the mounts using #6-32 machine screws. A small amount of out-thrust can be added at this time if desired, although it is not absolutely necessary..."

Update 23/05/2017: added modern copy of article, found online at www.airplanesandrockets.com, thanks to GeorgeAlbo. 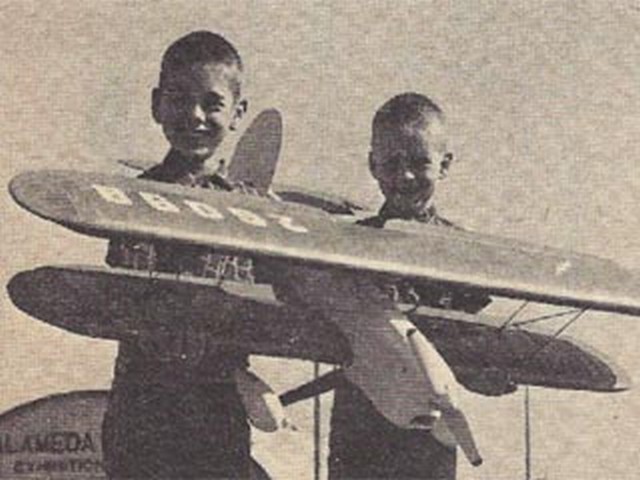