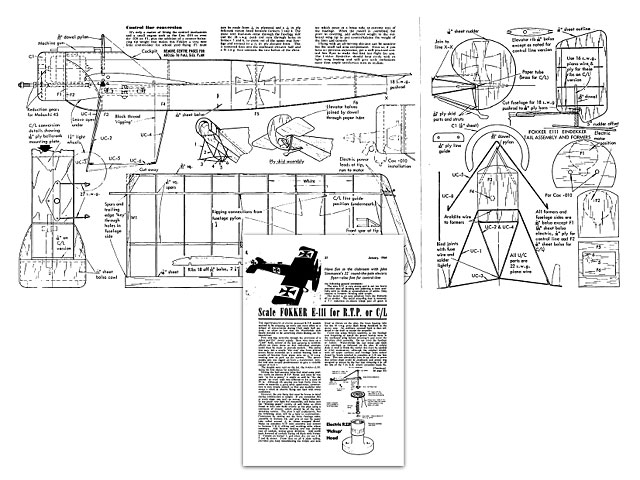 The practicability of electric powered RTP models seemed to be cropping up more and more often as a subject of conversation during Club night bull sessions: so often in fact that the Wharfedale club finally decided to do something about finding out for themselves!

First step was naturally enough the provision of a pylon and DC power supply: these were done on a 'Club' basis, several of the lads agreeing to combine efforts on these items so that individual attempts could then be made to provide models. The pylon was easy, just a simple 'slip ring' disc from printed circuit board mounted on a central bearing, with a couple of brushes from piano wire on a 16 swg rotating arm to pick up the current. The power supply unit was rigged up from a transformer, rectifier and wire wound potentiometer to give a variable output of 0 - 12v.

The models were next on the list, the Fokker being the first choice for simplicity.

During the bull sessions John had aired some positive views on electric RTP flying, and since he was now 'in for a penny' it might is well be 'for the pound,' so exact scale was adhered to, for a span of 22 in. Although rib spacing was kept fairly close in order to maintain a good scale appearance, construction is very simple indeed, so that any modeller who wants a crack at electric flying can start with every confidence.

However, the one thing that must be borne in mind during construction is weight. If you remember this at every stage, you can't go wrong, Select absolutely top grade very light but reasonably stiff balsa (not the 'blotting paper' variety of soft balsa so often found in kits) and build exactly as the plan using a minimum of cement, which should be of the non-shrinking variety. The plan is self explanatory, but the following notes will be a help to construction:

Commence by cutting out the basic fuselage sides, assemble to formers 2-6, and join at rear by paper tube rolled around 1/16 in tissue wrapped dowel. Make up complete U/C wire assembly and cement to formers 3 & 4, slitting and notching sides where necessary. Add bottom decking and top decking rear of cockpit, noting grain direction. Add turtle back forward of cockpit, facing off flush with formerr 2. Cement on former 1, and when dry, cut out 1 & 2 and fit motor. From then on nil is plain sailing, provided you keep remembering the weight and note the following general comments:

The wire U/C is very strong and is not too heavy provided that all binding and soldering is done carefully with no blobs or accumulations of solder. Only cement to formers - binding adds weight.

The motor is an easy adoption from the Mabuchi 45 or similar. The metal mounting foot is removed, a 3:1 reduction es-Alarm Clock pair of gears is fitted as shown on the plan, the brass bearing tube for the 16 swg prop shaft being Araldited to the motor case. An ordinary screwed bush is then soldered to the shaft to accept the propeller.

Cover the wings before assembly to the fuselage (not forgetting to install the power lead-in wires in the starboard wing before covering), and cover the tail-plane after assembly. Do not cover the fuselage or rudder. Water-shrink the Jap tissue and dope very sparingly as indicted on the plan..." 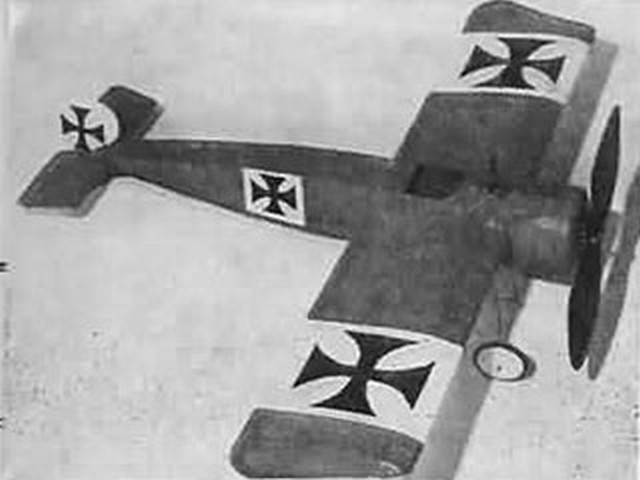