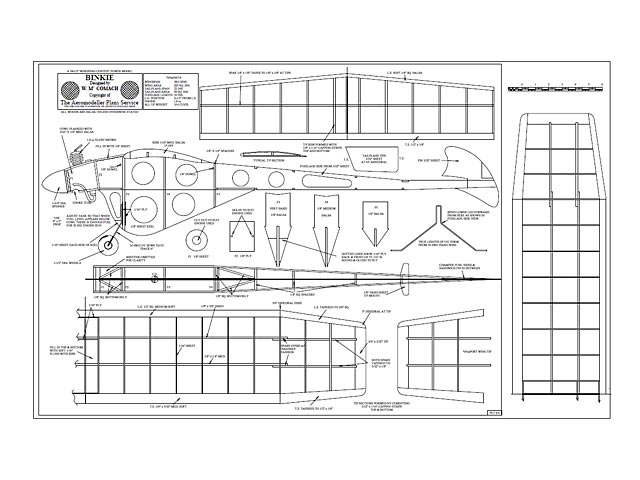 Quote: "BINKIE Mk1 was built in 1948 for the Belfast MFC's first power ratio competition and with a Mk. 1 Mills in front it finished 2nd, averaging 6.2 : 1. A larger Elfin powered version was built for the same comp. in 1949 and without any trimming flights whatsoever it won, averaging 7 : 1 in a half gale. Gipsy Drew, captain of the Irish Wakefield team, flew an identical model into 4th place in the International power ratio event at Cranfield. Binkie III, which was the same as Mk. IV except for the u/c and cowling and a few structural points, was flown at the B.M.F.C. annual Rally and finished first with 229 secs. on 17 secs. engine run.

Trimmed to the maximum in really good weather conditions Binkie was proved to be capable of 41 mins, and on 18-20 sec. motor runs.

Construction. Cut out fuse sides and F2 to F5. Lay one side flat on plan and fix formers in positions shown. When dry fix other fuselage side and after chamfering off the insides at the tail end sandwich fin in position.

Cement in 1/8 sq spacers and tailplane support. Securely bind and cement u/c to F3 and slot in underbelly keel. Bolt engine to F2 and fit F1 to mainbearing housing. Form cowl with planks of 3/32 x 1/4 balsa. Fit dowels etc and cover with rag tissue or Modelspan.

Assemble both wing spars to conform with dihedral as shown and assemble wings in usual manner, one panel at a time..." 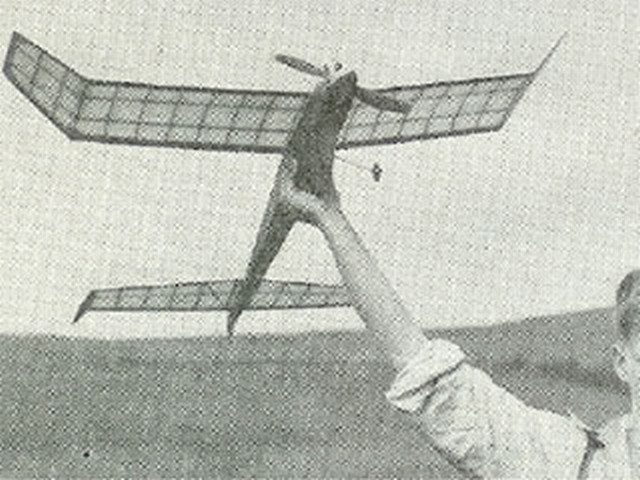