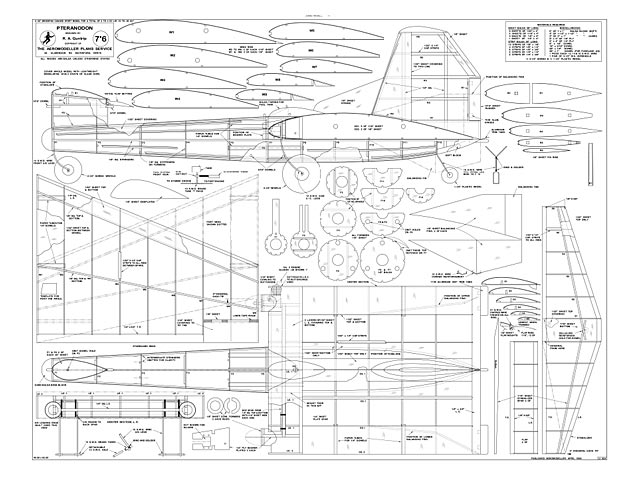 Quote: "DO YOU WANT a free-flight twin with no vices; that flies equally as well on one engine as it does on two; that can use engines of different capacities; that does not need simultaneous engine cut-outs; that is an ideal radio subject for radio control; that packs into a box only 22 x 171 x 15in; and which certainly is different? Then Pteranodon is the model you have been looking for.

The designer, needless to say, is a canard enthusiast, which accounts for the unusual back-end-first appearance. He has flown the prototype over a period of nearly two years and found it a thoroughly reliable sport model that can be taken out in any weather with complete confidence. It first took the editorial eye at the 1955 Northern Heights Gala where its stability and flying performance were impressive. Construction of the fuselage is slightly out of the normal run, but not at all difficult, and is fully detailed in the building instructions supplied with the plans. People using wheels other than those specified should adjust the length of the undercarriage legs to give adequate ground clearance for take-off and the following hints by Mr Guntrip on trimming and multi-engine starting procedure will be of interest to all.

Set all tabs at zero to their parent flying surfaces and obtain satisfactory glide in still air. Adjust the angle of glide by means of the flaps on the front main-plane and lock in position with cement. Do not use the tabs at the rear of the centre section. Rolling or yawing should be corrected by one wing tip tab and the tab on the centre fin. Again cement the adjusted tabs in their new positions, and do not use the balancing fin tabs for trimming the glide. Having now obtained the optimum straight glide run the starboard engine up to half power and launch with that engine only running. If any swing away from the off-set thrust develops in the ensuing power flight then turn out both balancing tabs by the same amount. Work up to full power on No. 1 engine and then fly with No. 2 only. If any appreciable swing develops with this engine, adjust the port tab and balance this for glide by the tab on the centre fin. Now fly the model on both engines, trimming for turn with the remaining wing tab..."

Update 27/02/2018: Replaced this plan with a clearer version, thanks to rchopper56. This has been completely redrawn from scratch. Beautiful work, too. Thanks Gene. 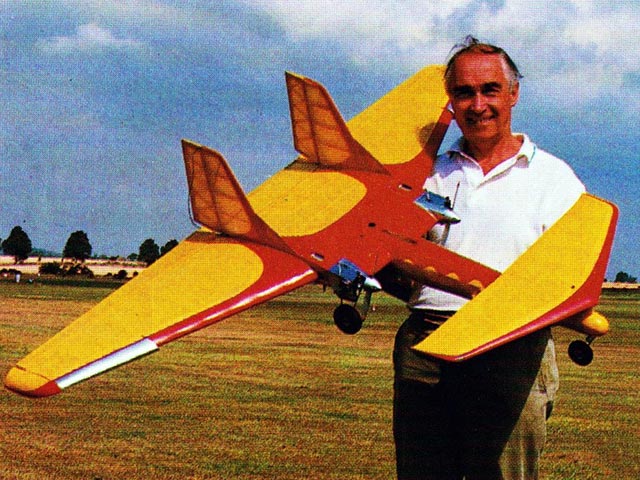