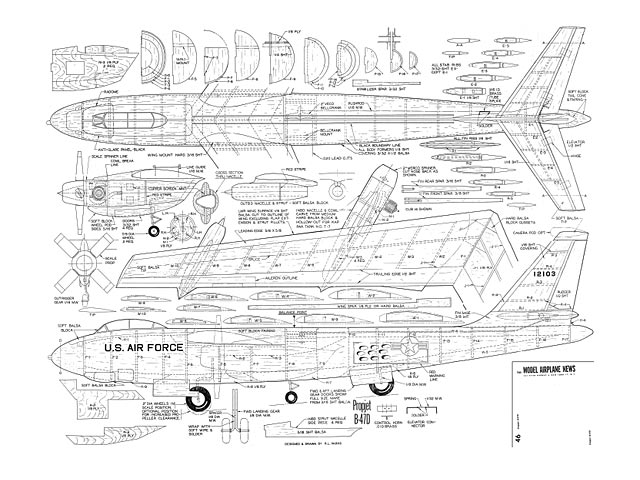 Quote: "For the scale builder, a unique and beautiful airplane. Authentic and a proven flier for engines of .15 displacement. Twin engines - let's go. Propjet B-47D, by Robert L Parks.

Between 1952 and 1954 three XB-47D's were built to test the Pratt and Whitney T-34 Turboprop installation. Having seen these airplanes in the early stages of modification, we decided to build a model. Since it was difficult to see the entire airplane, we had to guess as to what the inboard nacelles would look like. This explains the difference between the photographs and the drawings because at a later date the Boeing drawings were available. The outboard jets were retained as a safety factor in case of power failure in the inboard nacelles. Exact performance figures are not available. It has been stated that the low speed performance was improved and the cruise speed was slightly lowered.

After you have studied the plans carefully and read the instructions, start construction by cutting out the fuselage pieces. Pin the keel pieces to the plan and set up the bulkheads. After the cement is thoroughly dry, begin planking while the keel and frames are still on the board. Be sure to leave openings in the planking near the bell-crank and landing gear areas so that these units can be installed when the fuselage half is removed from the board.

After the right side bulkheads are cemented and dried, install the wing platform, bellcrank mount, bellcrank, and pushrod. Now partially plank the right side to keep the frames aligned and the fuselage rigid.

At this point, the landing gear units should be assembled. Clamp a piece of y8 sheet between the two landing gear legs, making sure that they are in the proper relation to each other. Then locate the spacer piece, wrap with soft wire, and solder..." 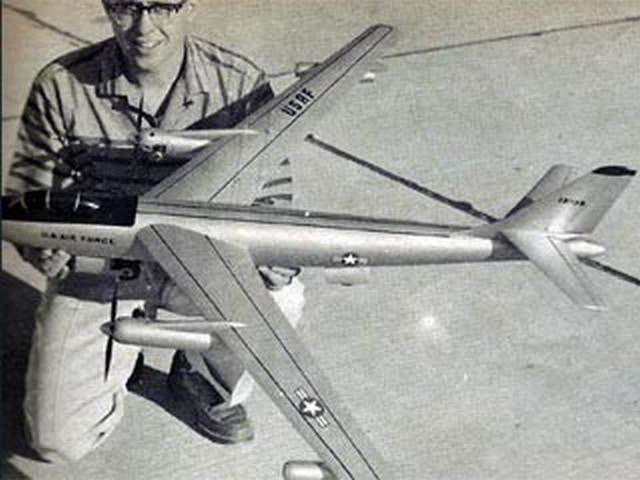