When Alexander de Seversky produced the P-35 pursuit plane in 1937, little did he dream that it would develop into the death-dealing monster of World War II known as the Thunderbolt. The US Army Air Corps purchased 136 of the 310 mph, 1200 hp P&W powered P-35s. Gross weight of this craft was 6,035 lbs.

The last P-35 was reworked into the XP-41 equipped with turbo-supercharging which was quickly developed into the P-43 Lancer. The Lancer's ability to climb to 44,000 feet set the pace for the yet-to-come P-47. Two hundred and fifty-two of the 360 mph, 7800-lb Lancers were delivered.

Stringent requirements worked out by the Wright Field Army Board in 1940 for a high-altitude escort, heavy fire-power, armored fighter gave birth to the P-47 - an enlarged and, of course, improved version of the Lancer. Speed of this early P-47B (P-47 and P-47A were canceled) was 429 mph, while it tipped the scales at 13,356 lbs. Power was the 2000 hp Pratt & Whitney twin row engine.

Externally, the Thunderbolt did not change until the middle of the D modifications. The P-47D-RE and P-47D-RA were revised to include a bubble canopy during 1943-1944. All subsequent models sported the canopy; later models included a dorsal fin for added directional stability. Speed of the P-47D was 420 mph and weight jumped to 14,500 lbs. Over 13,000 P-47D fighters were built.

Modifications continued up to the P-47N with speeds topping 510 mph on some experimental models. The P-47N was fitted with an enlarged wing and dorsal fin. Power was a 2100 hp P&W engine which upped the plane's speed to over 460 mph. The gross weight was 21,200 lbs., and 1,817 were built.

In view of the fact that the P-47D was, by far, the most widely used Thunderbolt, we decided to duplicate it in model form. For the benefit of those readers who are interested in the early P-47B and the later P-47N Thunderbolts, these craft have also been illustrated.

(We wish to thank Dr Thad S McCulloch and Mr Leon Shloss for their kind efforts and generosity without which this article would not have been possible.)

Any engine from .14 to .35 cubic inch displacement will fit into the nose of this 3/4 in to the foot scale replica. The .14 size will provide much realism in view of the fairly slow speed that will result, while a .3.5 will really burn that circle. For flights of moderate speeds, install an engine of from .19 to .29 cu in displacement. Either upright or inverted powerplant installation can be used successfully. An inverted engine has the advantage of being entirely or partially enclosed, thereby providing a more pleasing and realistic appearance.

Construction can begin with the wing by cutting the spars to the correct taper. Follow this by sawing the plywood joiner in one piece and cementing it to the spars..." 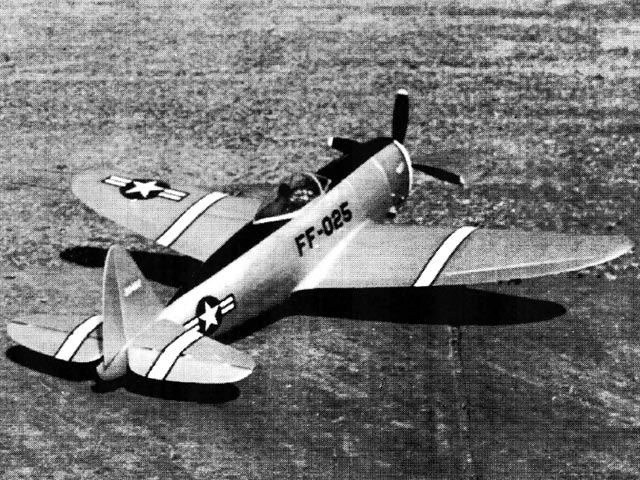