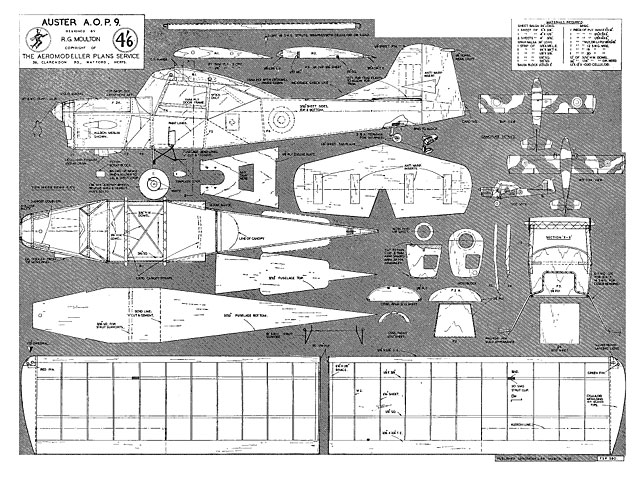 No OTHER aircraft company can claim the distinction attained by Auster Aircraft Ltd of Leicester, with its specialisation in lightplanes and Military Air Observation Parts. Each one of the Auster breed is given a mark number or name - we have the Aiglet, the Autocar, the popular V and the AOP.6, yet they are all known to John Public by one name - Auster. Only small distinction serves to split these types: but the latest of the line, the Mk9 joins the fleet as an entirely new design and deserves something more inspiring than a number to credit its proposed lines and high performance. Doubtless the Army, with its famous laxative pill of same Mk Number will soon find nomenclature suitable for this aeroplane that is sure to get things moving.

Modellers with scale inclinations will already have appreciated the way Auster have simplified their outline, shortened the tail moment, enlarged the tailplane and reduced the struttery to make the '9' a perfect subject. It bears sport design proportions, allows tough construction and is delightfully inherently stable. Like the full-size it can be overpowered for performance with a flair for aerobatics or it can fly on minimum power at stooge speed on low level circuits.

Shortening the tail moment of the Auster series, even though by only a slight degree, means that a sheet fuselage is possible as weight can be afforded at the rear to balance a lengthy nose cowling. Thus the 1 in to 1 ft scale version presented here is a sheet simplicity job, suitable for beginners or expert and calculated to give a maximum of fun for a minimum of repair work.

The original weighed 11-1/2 ounces, with a Merlin .8 cc diesel and after driving the designer to earth on a first flight loop peaking at 15 ft altitude and pulling out at scant inches, it was soon tamed for a left hand steeply banked circuit on 'recce' over Epsom Downs.

High level flying on a long motor run is followed by a safe and steady rate of descent sufficient to keep the flight within reasonable bounds so that as much as 90 seconds power run is possible in calm to medium wind conditions. And if the motor run is arranged for peak revs during the last steps of the flight, some entertaining loops and etcetera's can be arranged by elevator trim.

Start with the fuselage sheets, notching at bend lines and applying a cement skin so that sides and bottom approximate the required angles. Assemble F4, F5 onto the 1 mm ply door frames, noting the difference for the starboard side frame, and fit to sides. Check the incidence against the plan then cement the sides to bottom sheet, after fitting the strut loop wire and 3/16 sq retainer. Bind the u/c to F3, using 12 g wire for scale, or 14 g if the bends are difficult for you. F3 on the prototype was made of the new Solarbo 'Li-Ply' or 1/8 in ply, similarly for F1 and F2. Now fit F3 in place to set the 'bow' of the sides which are pulled in to square by adding F6, then the top. Set F1 at front, check the thrustline and fit engine plate supported by doublers each side at front. Add F2, F2a and 3/16 sq cabin structure with dowels attached. Fit engine, cutting away F1 to suit, add hollowed noseblock, complete cowl with sides, detachable planked top and cooling exit sides tapering inwards to F2.

The step, cabin ribs 1/16 dowel or reed cabin struts and 1 mm ply rear cabin frame, tailwheel and tank detail make the fuselage ready for the canopy and since Wing and Tail assembly is as simple as can be, a special instruction on acetate moulding will not be out of place.

Canopy Moulding: The AOP.9 cabin can be made without moulding, but loses its rotund appearance for a series of blunt angular bends. To get scale effect, a block of laminated scrap sheet is carved to actual shape, and the moulding made in two stages.

For the prototype, ordinary celluloid with a measured .013 in thickness produced good results, though .020 acetate, from some model shops and most handicraft shops is to be advised. To mould the top, cut a sheet of the moulding material approximately 2 in oversize in all directions and pin at 2 in intervals along a pair of stout sticks. Heat the sheet in front of an electric fire until it becomes floppy and is giving off a steamy vapour. Keep the mould handy and well supported, then, when the sheet is very pliable, force it down in one swift and immediate movement on the Mould. A spare pair of hands suitably protected with a rag can force the ends at front and rear. Repeat for the windscreen and join the two with cement.

Tips are made in one by heating the acetate on a ply former with a clearance hole cut for the mould. When floppy, the ply is forced quickly over the mould and the acetate in between adopts the tip profile to perfection. Approx 1/5th the weight of balsa block, and replaceable with minimum bother, moulded tips are advised for all models, including contest types.

To get best effect, only rough trim the tip mouldings before fitting to the tip wing rib, then, when cemented in place, the excess can be cut away. The result is neater, and far easier to accomplish.

Ideal accessories for the AOP.9 are the MS circular plastic tank of transparent material which will just fit in the engine mounting plate hole and their 'Airtrap' wheels. Size of the tank is 7/8 in diameter, and the wheels, 1-3/4 in. The latter are to perfect scale in overall diameter and tyre section; but if 12-gauge piano wire is used for the undercarriage, the hubs have to be modified. Remove the aluminium bush by unscrewing in the normal manner, part the outer plastic hub sides, and smear all faces with a reputable cement. Screw up the bush again to pull everything tight, leave for 24 hours, then remove the bush and retain wheels with a large washer.

Assembly and camouflage in Dk Earth and Dk Green on all surfaces with white lettering make the Mk. 9 complete. Allow a free movement of 3/16 in for the tailplane until actual setting is found after test flights, and you'll find yourself with a lively stablemate for the Cessna Bird Dog (oz8452), its American equivalent, published last December." 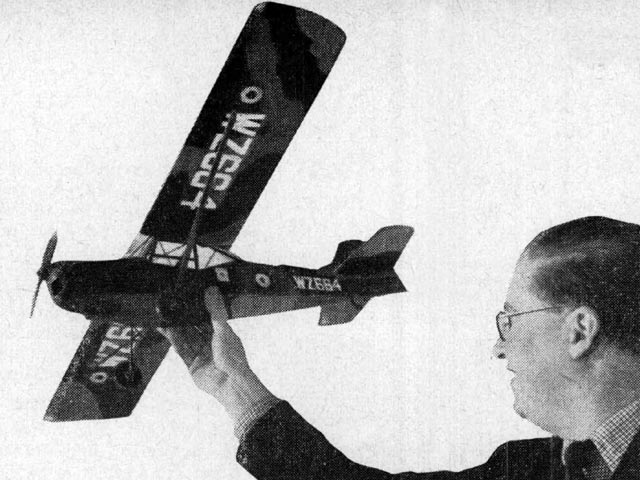