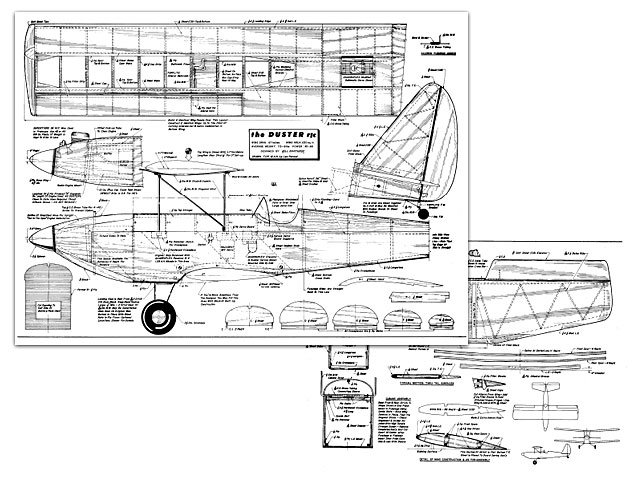 Quote: "Many people say they like bipes, but they haven't seen one that flies well. That's enough to make any self-respecting model designer head for the drawing board. The other reason is really an extension of the first. After all a bipe is designed to fly well, why shouldn't it qualify as a contest type airplane? Of course, some of us realize that nine-tenths of a winning combination is the flyer. Most people, and our manufacturers seem to bank heavily on this, feel that they're nine-tenths of the way toward being ace flyers if they have a duplicate of the champion's plane, engine, and radio. I hope some red-hot contest flyer will latch on to the Duster and give it a try.

Unfortunately, not being part Checker Cab, the Duster will have a difficult time with the exaggerated importance of ground handling now called for in the AMA rules. As to its performance in the air though, think of what type of airplane has won most all major world acrobatic championships since Wilbur and Orville quit fixing bicycles; what kind of airplane is used for low-level crop dusting, particularly of small fields surrounded by tall trees and power lines where immediate control response is so important? You bet your boots, buddy. Bipes!

Show me at man who loves bipcs, but won't build one, and I'll show you a guy who hates cutting out ribs and/or building wings. Before we go any further, let's clear up this situation. There are several cures for these problems. As for the ribs, use the sliced bologna method, as follows: trace the rib pattern on a light balsa block around 3-1/2 thick. Cut out the rib blank, including the spar notches, on a band saw, and sand smooth. Now set gate on band saw to the rib thickness required and make like the local delicatessen! A block this thick will give you around 30 ribs 3/32 in thick, enough for one Duster wing. A complete set of ribs for two wings shouldn't take more than an hour to produce, and man, they're uniform!

The wing construction is of such rugged and simple design that it's difficult to resist the temptation to build more units than are necessary. One R/C modeling friend of mine from Pennsylvania, who wishes to remain anonymous, even went so far as to build four complete wings for just one Duster! Ain't that right, Herby?

Now that we've cured this extra-wing-to-build phobia, let's get down to the whys and what-fors of R/C biplanes. The Duster is the eleventh in a string of biplanes which I have built and flown with varied amounts of success since 1956. The first one was my second R/C model, and was a development of the late Jack Luck's Faultless Chick (oz2489) a free-flight design published in the Feb, 1959 issue of MAN. The next one was my first 'own design' and was a modified scale bipe called the 'Great Lake Strainer'. The structural design was based on Jack's ideas and probably this alone has been the main contributing factor to its still being flyable today. A brief history might be of interest.

This plane, of two inch to the foot scale (about 53-inch span), was completed in 1957 and equipped with at Bonner Vari-comp working from Jack Port's famous old SM-1 receiver. The third position on the escapement actuated a Mighty Midget motor which turned at crank, which, in turn, kicked the elevator up with each revolution..." 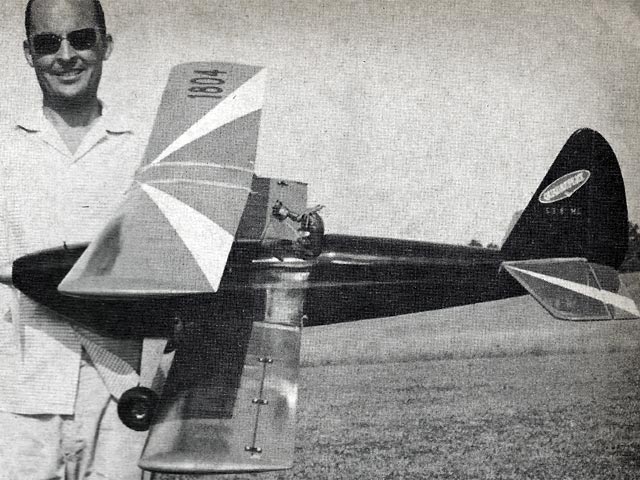