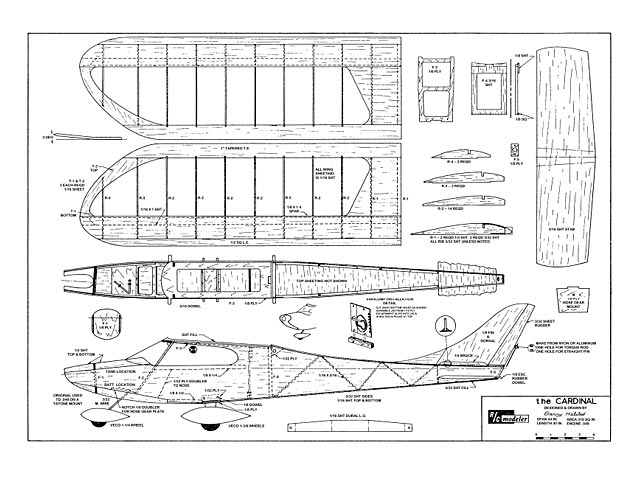 Quote: "A trip to the local flying field will probably convince you that most rudder-only planes, and certainly the 1/2-A ships, are nothing more than 'flying boxes.' The only excuse for the existence of these 'squares' is that they are supposedly stronger and faster building than the sleek, streamlined ship with a generous expanse of window area.

The Cardinal was designed around a Bonner VariComp and a Cox Tee Dee or Medallion .049 - the most important consideration being an attempt to produce a good, fast-building sport rudder-only ship with no sacrifice in strength, yet one that would be something more than the run-of-the-mill flying box.

Since the Cardinal appeared on the cover of the December issue of R/C Modeler, a host of letters have been received asking for plans and construction details on this ship - makes me believe that there are others who are ready for a departure from the everyday designs. With the aforementioned Tee Dee .049, the Cardinal flies fairly fast and with excellent wind penetration. The first flights were made on a windy day and a stall was immediately apparent. A 3/32 shim under the trailing edge of the wing corrected this condition and subsequent flights were made without mishap. This shim should be removed in calm weather.

If you feel that the Cardinal is the change-of-pace Sunday flier you've been looking for (it'll fly on weekdays as well), order a set of plans, read the instructions through twice, and you're on your way!

Wing. Inasmuch as building wings is the most painful part of modeling to me, I usually start with them in order to get this part of the construction out of the way first. The wing of the Cardinal is unique in that it is almost completed when lifted off the building board. (I apologize for the word 'board', but our editor has his Magna-Jig under round-the-clock surveillance!) Construction time is shorter if both panels are constructed at the same time.

Notch the trailing edges and pin doen over the plan. Pin the bottom LE sheet in place. Glue the 1/2 in square LE and the bottom section sheeting in place..."

Update 07/09/2017: Replaced this plan with a clearer version, thanks to davidterrell80. 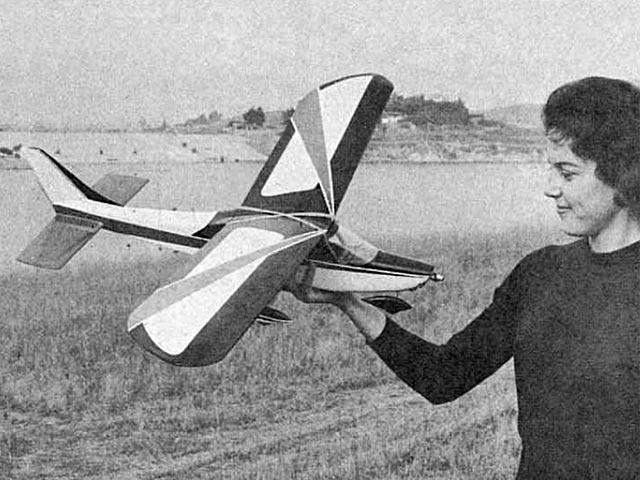