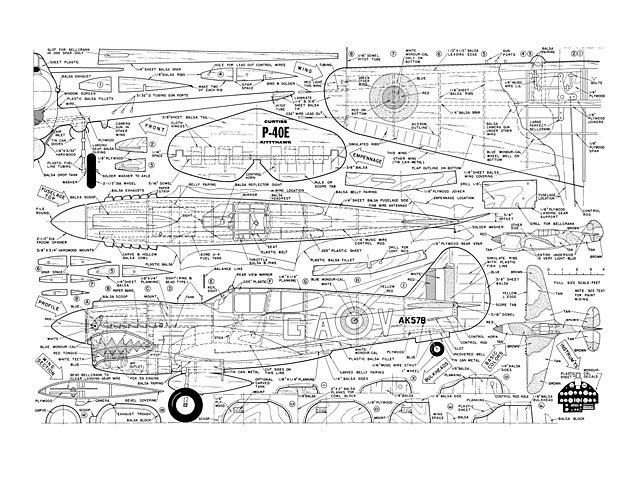 Quote: "An outstanding fighter plane of World War Two brought to you as a magnificent 1-inch-to-foot control liner with markings of a famous Ace
When British Ace Neville Duke served with No. 112 "Shark" Squadron RAF he flew a Curtiss Kittyhawk fighter, designated P-40E by the US Army Air Corps. Our model is a reproduction of this famous flyer's famous plane.

The basic Curtiss P-40 design of 1937 was a development of the earlier P-36 Mohawk, modified to accommodate the then new liquid cooled, V twelve, General Motors Allison engine. Built for low altitude operation and ground attack duties the P40 was extremely rugged but no match in overall performance to such other contemporary fighters as the Messerschmitt 109 and Mitsubishi Zero.

Despite this the P-40 served the Allies cause admirably during the second World War and defeated the enemy on several fronts including North Africa. In additon to its stint with they US Army Air Corps the craft was exported to China where it was used to great advantage by General Chennault and his American Volunteer Group, to Russia, Great Britain who deployed them with considerable skill in the African Campaign, and to the South Pacific. In addition P-40 squadrons served with the air forces of New Zealand, South Africa, Canada and Australia.

Early models of the P-40 lacked armor and self-sealing fuel tanks and were poorly armed with only two synchonized machine guns in their nose and two light guns in the wing. The first major improvement appeared in 1941: this version was named Kittyhawk by the RAF who used the craft in great quantity. "Kittyhawk" (or P-40E) was fitted with six wing mounted heavy .50 calibre machine guns, self-sealing fuel tanks, and pro-vision for a 52 gallon drop tank or 500 pound bomb under the fuselage. Over 2,300 Kittyhawks were constructed out of a total of 14,000 P-40 airframes. With 1,110 horsepower the P-40E attained a maximum 354 miles per hour and had a gross weight of 8,840 pounds.

Despite its so-so performance the P-40 remains one of the most popular fighting planes of the second Worltl War. The clean lines and beautiful proportions of the last of the 'Hawks' makes a most attractive control line model with superb flying characteristics. Let's get started on this one-inch-to-the-foot miniature.

Any glow plug or diesel engine from .29 to .60 cubic inch displacement can be used and can be completely enclosed if mounted inverted.

Cut plywood half-ribs and land-ing gear supports with coping or jig saw; drill holes for 'J' bolts. Bend wire landing gear struts, be sure one is left and one is right. Bolt struts to plywood support, clip off protruding threaded portion of J bolt after nut has been tightened..."

Article, 4 pages text and drawings, thanks to Anthony344 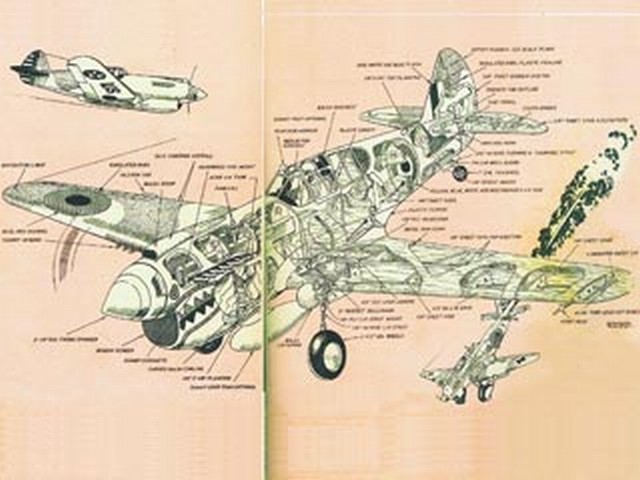