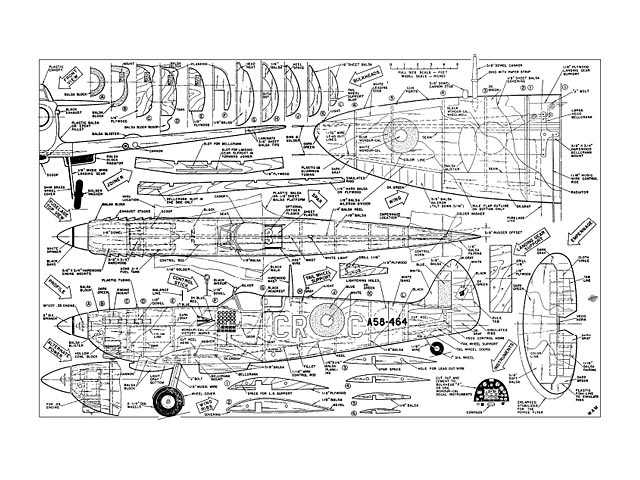 Quote: "One of the most popular fighter planes of WW2 in one-inch-to-the-foot scale. The markings are those used by Group Captain Clive R 'Killer' Caldwell.

One of the most popular fighter planes of the second world war to be dupli-cated in model form is unquestionably the immortal Spitfire. Except for a slightly short nose-moment arm the gallant Spitfire is beautifully proportioned for control line use and there is bound to be one or more at any scale type of competition. The one-inch-to-the-foot scale model presented here is the MK VIII and sports the exact markings of one of the Spitfires flown by Group Captain Clive R 'Killer' Caldwell, Australia's Ace of Aces. Caldwell called the MK VIII Spitfire - The most elegant military aircraft I ever flew.

With a retractable tailwheel, 202 pounds of pilot armor, increased armament, and a 1,580 hp Rolls-Royce Merlin engine, the MK VIII Spitfire was a considerable improvement over the MK II of the Battle of Britain. It attained a maximum speed of 404 mph and had a service ceiling of 41,500 feet. Armament normally consisted of two British Hispano 20-mm cannon in the wing although provision was made for two more cannon. Four Browning .303-caliber machine guns supplemented the cannon. The maximum flying weight was 8,000 pounds.

'Killer' Caldwell flew the MK VIII Spitfire when he was the leader of No. 80 Fighter Wing, Royal Australian Air Force, in 1944. Notice that the code letters are Caldwell's own initials. Only Wing Commanders and Group Captains were accorded this privilage. This unit was based on the island of Morotai in the Halmaheras, which is now part of Indonesia, and inflicted considerable damage to the Japanese in that area. Prior to this assignment the Ace was based in North Africa and fought the Germans and Italians over the Mediteranean Sea and the hot sands of Libya and Egypt as leader of No. 112 Fighter Squadron, RAF. Caldwell later commanded No.1 Fighter Wing in Darwin which beat off the Japanese raiders along the northern Australian coast. Clive Caldwell's official score stands at 28-1/2 enemy planes destroyed, 13 probables, and 23 planes badly damaged in the air. He flew into action on 396 operational sorties which totalled 674 combat hours during his three tours of duty. Today he is a successful business man in Australia.

Instructions: Construction of our Spitfire model begins with the wing. Trace and cut the spar and joiners to shape and cement the joiners to the spar halves under moderate pressure. Use C clamps or weights. Cut to shape the wing ribs, landing gear support, and bellcrank mount. Cement the ribs securely in the spar notches and slip the plywood land-ing gear support into the slots in the ribs and forward joiner. Cement the bell-crank mount between the ribs and to the spar.

The landing gear is bent from one piece of music wire. This is then attach-ed to the plywood support with 'J' bolts. Fasten securely and smear the installa-tion with several coats of cement. Our landing gear is placed slightly forward of the scale location for improved landing characteristics.

The wing is covered with six sections of sheet balsa; three on top and three on bottom. Before covering begins the 3-in wide sheets of balsa must be butt joined together to form the correct chord width. Now, trace the outline of each panel about one-quarter inch too large. Cut out and trial fit to the structure. The bottom is covered first. Apply plenty of slow drying cement to the ribs and spar and press the covering in place. Hold in place to the structure with straight pins. When dry bevel the leading and trail-ing edge of the lower covering and add the aileron divider. Now apply plenty of cement to the ribs, spar, aileron divider, and bevelled portions of the lower covering. Quickly attach the upper covering, again holding in place with pins..."

Update 2/07/2021: Replaced this plan with a cleaned up version, thanks to TonyP.