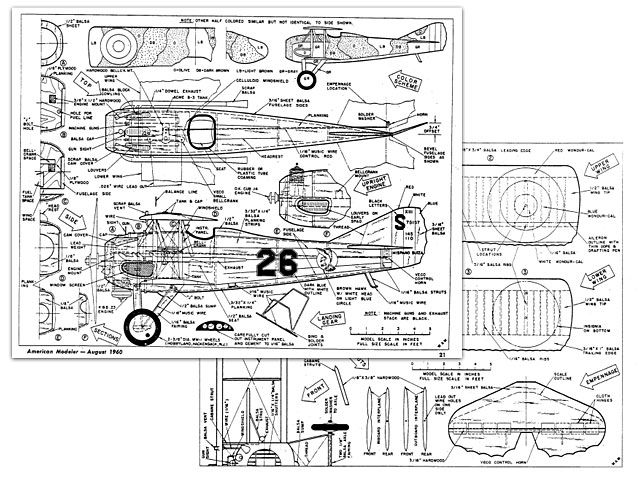 Quote: "Famous Aces and their Fighting Planes, by Walt Musciano. 'Cowboy' Frank Luke and the SPAD.

Undoubtedly, the best remembered Allied scout plane of World War One was the French SPAD. This fighter, used extensively by French and the American airmen and by several British squad-rons as well, proved extremely popular. Designed and constructed by the 'Societe Pour Aviation et ses Derivees' (hence the initials SPAD), the biplane was the strongest- Allied scout and one of the few aircraft at the time which could maintain sustained high speed dives without falling apart. Powered by a Hispano-Suiza, eight cylinder, vee-type engine of 220 horsepower, the SPAD XIII at-tained a top speed of 135 miles per hour and could climb to 6500 feet in 53/4 minutes. Service ceiling was 22,300 feet and landing speed 59 miles per hour.

An improvement over the earlier SPAD VII, the XIII was not as maneuverable as some of its contemporaries, however, it possessed the assets of high speed, good rate of climb and high ceiling. This last asset placed the SPAD at a considerable advantage over the Albratros and other German planes because it could dive on them from above bringing the element of surprise to the beginning of a dogfight. The SPAD was considered a fairly difficult plane to fly when compared with the stable SE5, and had to be piloted very carefully during a landing. Some pilots claimed it was tail heavy. In spite of this, several thousand rugged SPAD scouts were built and served with tremendous success until the Armistice.

Armament consisted of the standard twin Vickers machine guns mounted atop the cowl. Some SPAD scouts serving with the AEF were equipped with twin Browning machine guns. No bombs were fitted directly to the SPAD, however, provision was made for carrying two 25 pound fragmentation bombs in a container located aft of the pilot's seat.

Virtually every leading French and American Ace flew the SPAD.

The one inch to the foot control line SPAD described here can be powered by any engine of from .14 to .29 cubic inch displacement. A heavy engine with short crankshaft is ideal because of the exceptionally short nose. A .19 or .23 powerplant should be ideal for all around sport use in this 195 square inch wing area beauty.

Construction begins with the wings which are very elementary having no sweep back or dihedral. The rib spacing shown is exact scale and provides a very rigid airframe. If the builder desires he can omit every other rib, but must then increase the rib thickness to 3/32 balsa. (We suggest the scale spacing.)

Both wings are constructed in identical fashion although the shape and size differs. Cut the leading and trailing edges to length and trim them roughly to shape with a sharp knife. Trace and cut the ribs to shape and cement them to the leading and trailing edges directly over the full size plans. Carve and add the tips and solid center section and set aside to dry. Complete the wings with a thorough sanding. Recement all joints and cover the wings with silk. Water and apply three coats of clear dope.

The fuselage is started by cutting the two sides to shape. Check the grain structure and wood hardness of both fuselage sides to be certain they are identical. Cement the hardwood struts into the slots in the fuselage sides. Cut the fuselage formers and cement them between the sides. Pull the sides together at the rear and cement well. Cut the engine mounts to length and cement them thoroughly to the plywood bulkheads. Install the commercial fuel tank rigidly. Wedge scrap balsa and apply cement liberally around the tank. Extend filling, vent, and feed connections with plastic tubing. Tape over open ends to keep the tank clean..."