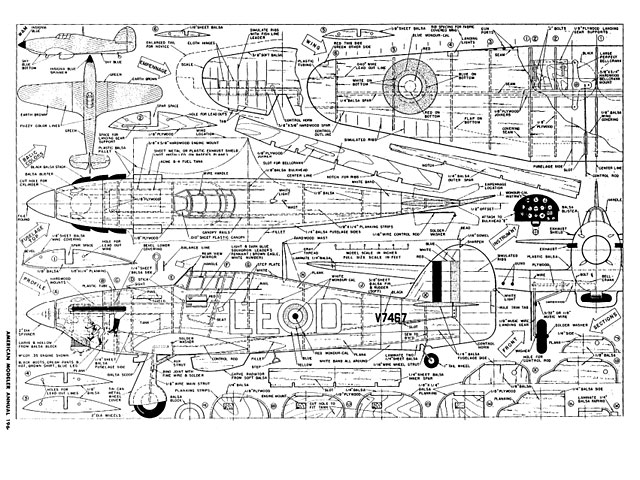 The Royal Air Force's first monoplane fighter and its first to exceed 300 mph was designer Sidney Camm's Hawker Hurricane. The prototype first took to the air on November 6, 1935. Initial tests proved so successful that Hawker Aircraft ordered material for one thousand machines and began tooling for mass produc-tion of the new design before any official quantity order had been placed! But the company's faith in the design was well-founded and shortly the Air Ministry began placing orders for the plane that was to bear the brunt of the fighting during the forthcoming Battle of Britain. In fact, orders for the new fighter were so brisk that Gloster Aircraft and Cana-dian Car and Foundry Company received contracts to produce the craft.

Early Hurricane models were fitted with two bladed, fixed-pitch propellers and fabric-covered wings. Soon this changed and three-bladed controllable-pitch metal propellers and stressed skin metal-covered wings became standard equipment. By September 3, 1939, the date of the beginning of WWII, almost five hundred Hawker Hurricane Mark I fighters were in service with eighteen RAF squadrons. When the Battle of Britain started in July 1940, thirty squadrons of Hurricanes were ready as compared with only nineteen squadrons of Spitfires.

Maximum speed of the Mark I was 325 mph at 17,500 feet altitude. With a gross weight of 7,127 lb it could climb to 20,000 feet in nine minutes and had a service ceiling of 36,000 feet. Armament consisted of eight .303 caliber machine guns buried in the wing. A twelve cylinder V type liquid-cooled, 1,025-hp Rolls-Royce Merlin engine propelled the trim fighter.

Despite the fact that the Hurricane performance was in general inferior to that of the Messerschmitt Me-109, its superior maneuverability, good forward visibility and ability to absorb considerable punishment enabled pilots such as Bader, Tuck and Kain to rack up impressive scores flying the old 'Hurry-box'.

The last of more than 14,000 Hurricanes were delivered during September, 1944. These had served as fighters, bombers, ground attack, cata-pult planes, shipboard fighters and night fighters, and deserve an honored place among the outstanding combat aircraft of all time.

Our model Hurricane is patterned after the plane flown by Douglas Bader when he was a Squadron Leader during the Battle of Britain. Built to a scale of one inch to the foot, it can -accommodate any glow plug engine from .29 to .60 cubic inch displacement. The ideal size is between 35 and 40. While the plans show all-balsa structure for durability, the meticulous enthusiast can simulate fabric covering on the wings by cementing plastic fish line leader to the model as shown, then applying numerous coats of balsa sealer to fair these into the wing surface.

Construction begins with the wing. Cut spars from 1/4 in sheet balsa and joiners from 1/8 thick plywood. Cement spar pieces between joiners and set aside to dry. Slip ribs into spar notches and cement well. Cement plywood landing gear mount into wing rib slots, then bend landing gear. If a large, heavy engine is to be installed make the auxiliary landing gear struts from 1/8 wire, otherwise use 3/32 wire. Bind the joint with fine copper wire and solder well. 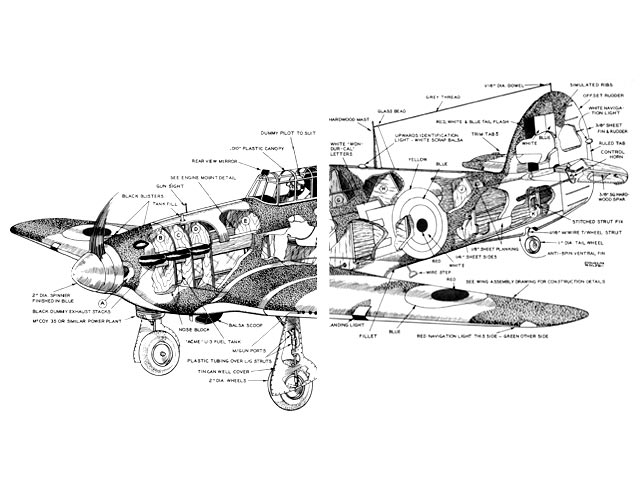