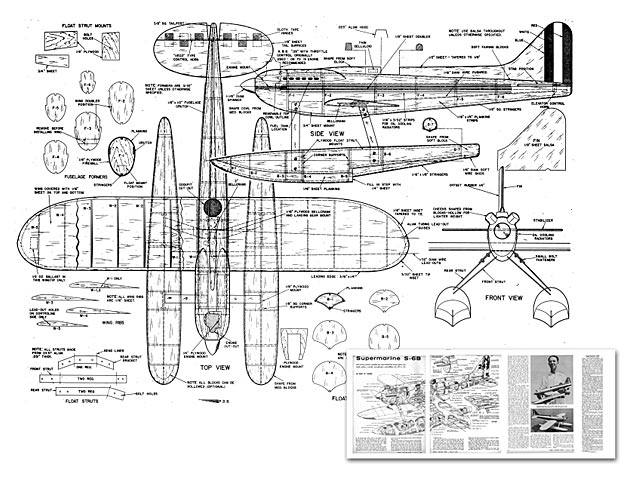 Quote: "One of the greatest, possibly the most beautiful racing plane ever built, makes a terrific rise-off-water controlliner for .09 to .19. Supermarine S-6B, by Ruby W Tapper.

It is lots of fun to fly the model. It takes off in about 15 to 20 feet. I installed a K&B .09 with throttle control - closed exhaust port plus venturi flapper. The throttle was operated by air tube to pilot. This engine has plenty of power for take-off. This airplane will fly slowly or 50 to 60 miles an hour.

Wing. Construction is somewhat similar to the AJ Fireball (oz5746). The wing is all wood, consisting of a top and bottom skin of 1/16 in sheet balsa and 1/16 in sheet ribs. Butt join two lengths of sheet balsa for the top skin, and two more for the bottom. Trim the lower skin blank to the exact outline shown on the plans; trim the top skin with about an overhang all around. The upper skin can be more exactly trimmed as you trial fit it in place on the otherwise assembled wing.

The wing is built flat on the bench but note that the under surface slopes up toward the leading edge. Slide a long piece of 1/16 x 1/4 in under the lower skin, just beneath the leading edge, thus holding it up in the proper position. Cement 3/16 square leading edge and tip filler pieces (3/32 and 1/18 thick) in place on the bottom skin. Install the plywood bellcrank mount and the bell-crank. While cementing the ribs in position, make sure the leadout holes are properly located. There is no trailing edge piece - the top and bottom skins are featherd slightly (side view) to make a good seam.

Take the wing from the bench and, with your razor, taper the leading edge and rip filler pieces, then carefully sand them to the proper mating angles for the top skin. Feather the trailing edge part of the skin where it will meet the top skin. Match the top skin blank, by trimming as necessary with razor and sand paper.

Install the leadouts before closing in the wing. The rear float bracket bolts to
the wing bottom before the top skin is installed. Be sure the boltheads clear the bellcrank - file down if necessary, or bend up bellcrank slightly or adjust its spacing with washers. Pattems are given for all the .051 inch thick dural brackets. Now put the lower part of the wing back on the bench and cement the top skin in position. The fast worker may handle this as one operation, but it would be better to start the leading edge, placing cement all along that edge, and well back on the ribs, pinning the skin to it, then, finally, cement and pin the trailing edge together. The tip section may be moistened if necessary when closing in the tip. Another way of making the tip would be to use soft sheet balsa, cut to outline (from last rib out), shaped, and cemented to the last rib. Note the cutout hole for the pushrod. If necessary, cut out skin to clear bellcrank. To finish the wing, carefully sand round the leading and tip edges, and barely touch up the trailing edge.

Fuselage: The bulkheads are cut to shape from 1/8 in sheet balsa (F1 is 1/8 ply) and are cemented in place between the two long crutch members of 1/8 x 1/2 in hard balsa. Top and bottom stringers (on center line) are 1/8 square and serve to align the bulk-heads preparatory to covering fuselage with its thin balsa skin..."

Update 0/01/2013: Replaced this with a clearer scan thanks to aeromeddler. 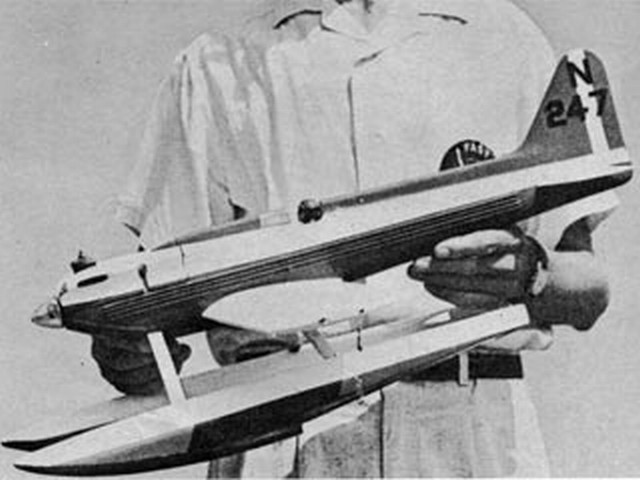