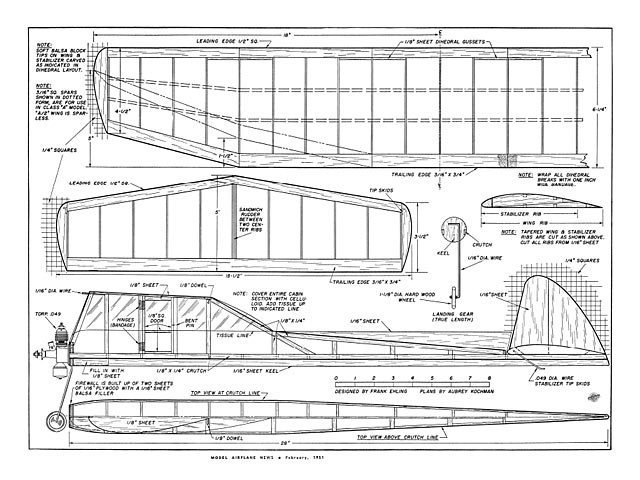 Atlas. Something New in Payload. Design for PAA, from May 1951 MAN.

WITH the ever-increasing interest that is being shown in the A/2 Payload models, and considering the number that showed up at the Nationals last year, this event is bound to become popular. Right now kits are under way. They will be popular since the builder can build a model of this small size quicker, in much less space and using less material. After all, if you do have power to spare, it can be converted into pulling a larger model which can carry the 3 oz that is required. Don't think for a minute that these models are of the slow moving type, as they can turn in flights that will cause many a pair of legs to tire from running.

Atlas, my 1951 Half A payload job, was designed expressly for competition under the new rules just released by Pan American World Airways. Last year I was lucky enough to win the combined-age class Half A payload event at the Dallas Nationals, that being a test of the modelers' reaction to the idea of small weight lifters.

The plans for the design which appear with this article are a development of the 1950 airplane, whose bulkiness - due to the old dummy specification which required a 4 in deep fuselage - contributed heavily to drag or air resistance. The design shown here could be slimmed down considerably because of the smaller dummies, making possible a cleaner airplane, hence a larger one. The wing area has been increased to about 215 sq in, or about 200 sq in if calculated by projected area.

Its design interprets the rules to the flier's advantage but does not find any questionable loopholes. For example, pod-and-boom construction is out; yet the thin rear of the fuselage, with long dorsal fin, will be classified as normal fuselage construction.

The plans may be scaled up for A/2 or for Class A. Make a ruler using the scale shown on the plan. Under the new rules, Classes A and B will compete as one class, although the B model must carry two dummies rather than one. A small three-view drawing is provided to assist in scaling up to the A job. The A ship would be approximately 50% larger, its area, however, would be in the neighborhood of 475 sq in, which would work out for a loading of about 8 oz. per sq. foot. Another factor in increasing the size of the Half A Atlas is the fact that dummy weights have been increased to 3 oz. this year, so that the gross weight of ship and dummies is about 8 oz. The new dummy, incidentally, is only 3 in high, rather than 4 as last year..." 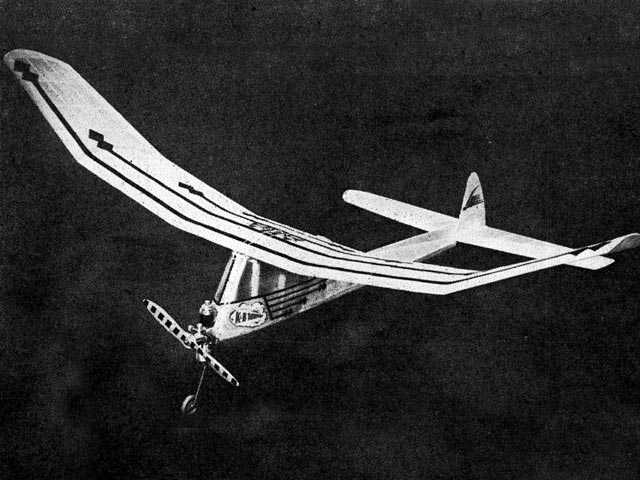 Renamed this one now to 'Atlas' rather than 'Something New in Payload', thanks Ray.
SteveWMD - 07/01/2019
How to make the ribs of the wing tips? The plan does not show the measurements of it. Thanks
Aa - 23/03/2020
The plan has a note saying "Tapered wing and stab ribs are cut as shown above. Cut all ribs from 1/16 sheet". Basically, draw an angled line, to make each rib the size you want. I don't think the airfoil shape you end up with is at all critical, you just need (some, any) ribs of the correct length, to fill out the wing shape.
SteveWMD - 23/03/2020
Add a comment