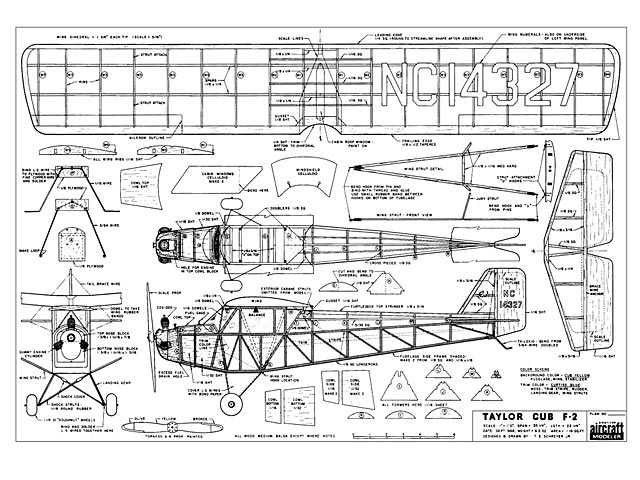 Quote: "This .02-powered model is just like the real plane - which Taylor Aircraft described in 1931 as soundly engineered, sturdy, safe and economical to own and fly. Taylor Cub F-2, by Ted Schreyer.

COMBINE the finesse of a rubber-powered scale model with the excitement of gas-powered free-flight and you come up with the 'mini-power' scale model. The Taylor Cub F-2 is such a model. With a 35-1/4 in span it is easy and economical to construct. The little Cox .020 Pee Wee engine puts out just the right amount of thrust to provide beautiful, realistic flights, sure to make an afternoon of flying pleasure.

Why was the Cub chosen for a free-flight scale model? Well, it provides a simple and stable design which, with its airframe of straight lines and flat surfaces, makes for easy building and covering. It also makes a very attractive model of one of the inter-esting and most important lightplanes in aviation history.

The plan was drawn to a scale of 1 in = 1 ft from a 3-view drawing in 'Flying for 1936' published by The Aeronautical Chamber of Commerce of America Inc, with an assist from data and photo courtesy of the Piper Aircraft Corp. Wing dihedral and tail surface areas were increased to improve flight performance. This Cub model is a practical flying scale design, not a super-detailed exhibition piece.

The Taylor Aircraft Co of Bradford, Penn, produced this lightplane in 1931 that, in their words: must look and perform like the larger, expensive planes; must be soundly engineered, sturdy and tough - and it must be safe. Above all, it must be economical to own and fly.

The resulting success of this plane, and the later Piper Cub designs, is legend. Construction was strong and long-lasting, with wing of aluminum-alloy ribs and spruce spars; fuselage of welded, tubular steel; tail assembly of tubular steel; and the plane fabric-covered except for the metal engine cowling.

Construction: Study the plan to familiarize yourself with the model. When buying your supplies choose the wood carefully, since a few minutes spent selecting good balsa will make your model easier to build, last longer, and fly better. Soft balsa lacks strength, while rock-hard balsa is too heavy. This model is on the sturdy side to withstand the rigors of everyday flying, which also makes it easier to build because of large wood sizes. Give all joints a second coat of glue for strength.

Fuselage: Make two sides, one at a time, over Saran-wrap protected plan. The fuselage side is shown shaded. Longerons and uprights are 1/8 sq balsa, while most diagonals are 1/16 x 1/8 balsa. Make cuts in the longeron where it changes direction, and glue. When a side is dry, remove from plan and add the 1/8 sq cabin doublers, extending from fuselage top to bottom. Bevel inside rear of sides and glue together. Cut the cross pieces to length from the top view and glue in place, working from tail to nose. Check often to keep fuselage sections rectangular and fuselage longitudinally straight. Glue plywood firewall 'A' to fuselage front, then glue in place balsa Model engine simulates top cylinder of the formers 'B' thru 'N'..." 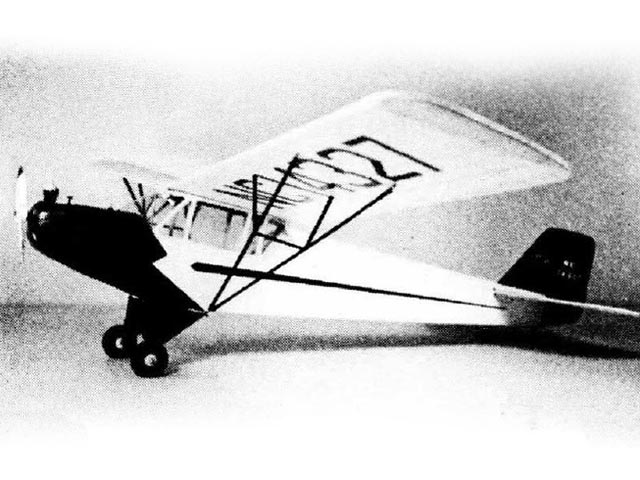 Hi Steve, I built one of these from the AM plan years ago - still have it. converted the model to pulse rudder (Ace Pulse Commander) with magnetic actuator (still in my model). Power is a Cox Pee Wee .020 When the motor runs well (high-nitro fuel), this little machine flies very well! It's a bit delicate when flying from a rough field, but despite punctures in the tissue covering, my model has survived nicely. Cheers,
Rudy - 31/10/2014
Add a comment