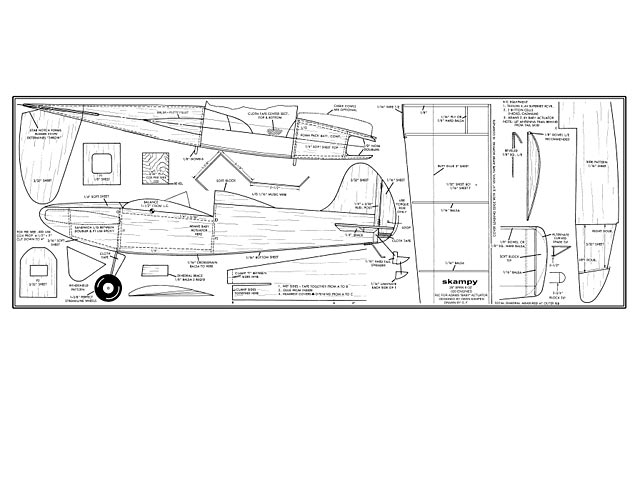 Quote: "THIS article follows closely the Shop & Field bits on balsa selection, use of tools, etc. Here's a chance to put some of that knowledge to work. A model design can come into existence for a variety of reasons and a variety of purposes. SKAMPY would not have been born at all but for a late at night phone call from Dick Adams announcing the birth of a new 'BABY.'

It took a While to pene-trate my sleep-fogged mind, but it soon became clear he was talking about a new actuator and not an addition to the Adams family, a healthy happy group of nine, not including the dog, assorted guppies, and guinea pigs. As the excited father became more coherent the specifications took on meaning. The 9/16 ounce BABY actuator now made possible a complete 2.4 volt system, weighing under 3 ounces and it became clear that this exciting new product would open the doors to a new concept in small R/C airplanes.

Next day the drawing board was cleared for action as this challenge was too much to resist. The goal was to be an easy-to-build, stable, and responsive 8 ounce R/C model having the look and feel of a full scale sport plane. In the years past, several small designs had made brief appearances as novelties and, as a group, could be characterized as just that. In the air they tended to be nervous and twitchy and im-possible to control by all but the most experienced hands. Under these conditions, the novelty wore off, fast. Hopefully, Skampy was to be different; a plane that would be easy to fly yet hold enough challenge to maintain more than passing interest. Now with the BABY, true proportional control was available which would smooth out the gentle maneuvers and still give full solid rudder reaction when desired.

Construction was begun almost immediately and completed not many hours later. The whole experience was a reminder of younger days and rubber motored free fighters. Finally as I looked at the perky little job sitting proudly on the work bench an un-nerving thought occurred. For years, this designer has cringed when well meaning friends have referred to a small plane as 'cute'. But damn it - this one was! Work had proceeded so rapidly that I was ready to go days before a hand-tooled prototype actuator became available. At last Dick drove to Madison from Janesville with Baby number 4, and we were ready to go.

The new Adams actuator, sporting black and red high impact plastic molded coil headers and bearing plate, the metal shoe carefully nickel plated and the magnetic heart of the unit (a specially manufactured rotor of Alnico 8), all added together gave it the appearance of a little jewel. This was the end product of over 15 years of continued experimentation and refinement.

In this age of highly exotic components the fundamental simplicity of the patented Adams magnetic actuator has been over-looked by many, but the fact remains that with it's one moving part and rugged con-struction, it is nearly indestructible and good for years of use. It is not generally known, but Testors came to the same con-clusions when they chose the Adams Actuator as the driving unit for thousands of ready to fly Skyhawks. Reliability and simplicity were the critical factors in their decision, and time has proved it to be sound..." 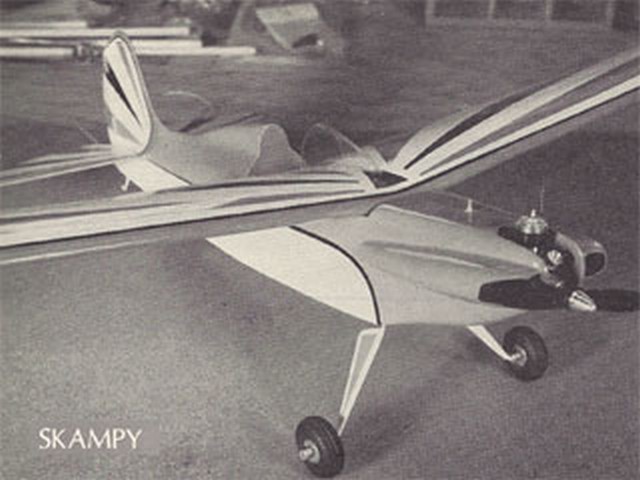