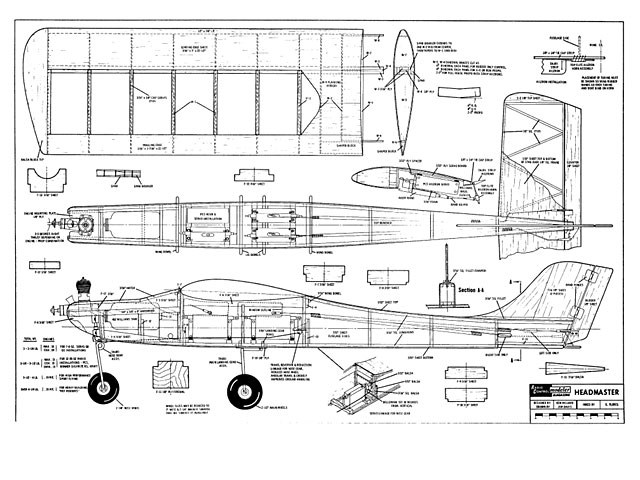 Quote: "RCM's chief Sunday flier has come up with a four-footer that is one of the most versatile models ever designed. Prototypes have been flown on single channel servos, Galloping Ghost, and full-house proportional, with engines ranging from .10 to .35. This one will put you at the head of the flying class.

So I sketched out a four-foot version of the Schoolmaster (oz7534) with the modifications which Jim had suggested. As luck would have it, the four-foot size made it possible to use a Top Flite Tauri (oz5162) type wing, with the span shortened to four feet. Also, the Tauri landing gear fitted right into the plan. At first I thought it looked a little big, but I went ahead with it anyway, and the Tauri landing gear makes the model exceptionally easy to handle on the ground, plus the fact that it certainly reduces damage to the plane, and particularly the prop, in hard landings.

So what to call it? Well, the School-master of a big school is called the Headmaster. And that's what it is. You'll learn a lot about flying R/C from the Headmaster - and it'll forgive you for all but the most violent mistakes.

Construction is so simple and conventional that you can probably build it right from the plans without reference to any explanatory text. Also, during the building of one of the prototypes, my friend Bob Andris took several construction shots in sequence. There are only a couple of points which might bring up a question in your mind, so let's see if I can anticipate them before-hand.

Fuselage. This is a typical 'slabsider,' but you can disguise it. The 3/16 square longerons give an excellent gluing surface for the top and bottom sheeting, then, after the 'box' is completed, you can round the corners. Section A-A shows how it appears in cross section at that point - and you can do the rounding all the way forward on the top to the rear of the wing, and the full length of the bottom, fairing it out slightly at the plywood plate where the main landing gear is mounted. The rounded corners also work very well in the top forward front area where the hatch is. Just spot glue the hatch in place, round off the top, and then cut the hatch away.

Incidentally, you may wonder why the hatch is shown as having a short section which slopes up to the simulated wind-shield. This is necessary in order to be able to insert and remove the four-ounce Williams tank. The engine is shown mounted on a 'breakaway' 1/2 in plywood plate. Since there will be so many different engine installations suitable to the Headmaster, I haven't shown any specific mounting holes. Drill them to suit your engine. The plate will take any engine from a Max. 10 to a .35. Mount the plate to the W square hardwood engine bear-ers with either 3-48 bolts and blind nuts - or 4-40 if you go to the larger engine size like the .35.

You can get the Tauri type landing gear in most hobby shops, or order it direct if necessary. Full instructions on the nose wheel installation are included in the Top Fite package. Another thing you might wonder about is the servo linkage to the nose gear. This serves two purposes - first, it puts the nose wheel pushrod takeoff at the rear of the servo, leaving more room in the center of the equipment section for the inevitable spaghetti pile of wires and connectors. Second, it is a reduction linkage which reduces the angular travel of the nose wheel. We had a devil of a time making takeoffs without this feature, since the nose wheel turned too much, even with the slightest servo movement, when a direct drive was used.

Wing. The wing is a variation of the Tauri wing, using the same airfoil. Since the model is slightly smaller and lighter than the Tauri, 1/16 in sheet for the leading edge, trailing edge, and cap strips is plenty strong enough. For those of you who prefer it, the wing can be fully sheeted. Or, for those who don't want to take the trouble to build up a wing, Jack Doty, of Foamcraft, has standard Tauri foam wing cores available, and you can use them merely by cutting the span down to the Headmaster's 48 inches.

Note that several dihedral angles are suggested. Again, the reason is obvious. The more control you have, the less dihedral you need. The angles I've shown represent recommended average figures for the various types of control..." 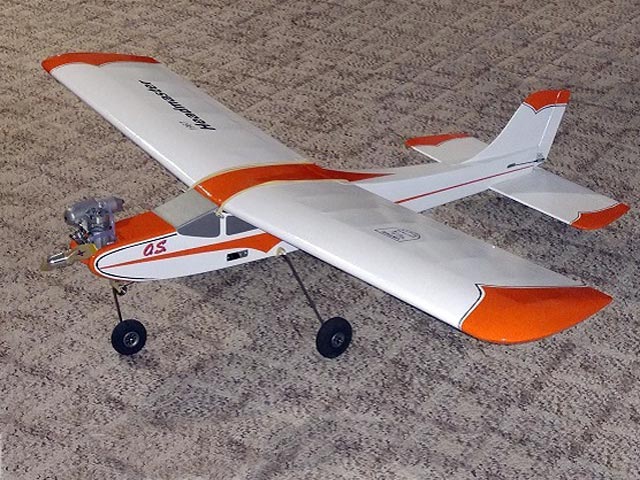