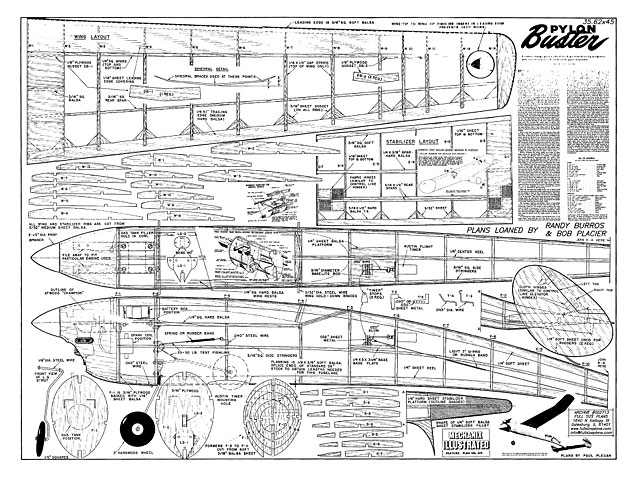 HERE is a gas model that is a contest threat in every sense of the word. It was designed with just one thought in mind - to prove that 'pylons' are not necessary. The consistent and high performance this model turns in is a direct result of the constant improvement and refinement that has gone into several models of the same design during the past three years. And the way Pylon Buster behaves under power is a tribute to the engine manufacturers.

With so much power available in the present day engines packed into such a slick job - well, you just can't go wrong.

The secret to Pylon Buster's high rate of climb (straight, not spiral) and very flat glide lies in a very simple yet foolproof tail adjustment mechanism which is hooked on to the ignition timer. After the engine cuts, the elevator moves slightly up and the kit rudder turns automatically, resulting in a flat circling - one for climbing and one for gliding!

The original model was powered with an Atwood Champion engine but the Hornet, McCoy, OK 60, Ohlsson 60 or any top displacement class C power plant can be used.

Due to the large size of the model and preponderance of curved parts, it would be wise to obtain full size plans from your hobby shop in order to save time and effort in scaling up the plans presented on these pages.

Wing construction is of the conventional type but the very thin airfoil (Goldberg G-7) and highaspect ratio makes it imperative to exercise the utmost of care when selecting the wood and during actual construction. The front and rear spars are very hard balsa while the tips, leading edge, ribs and trailing edge are of medium grade stock. The wing is built in two halves and then joined... " 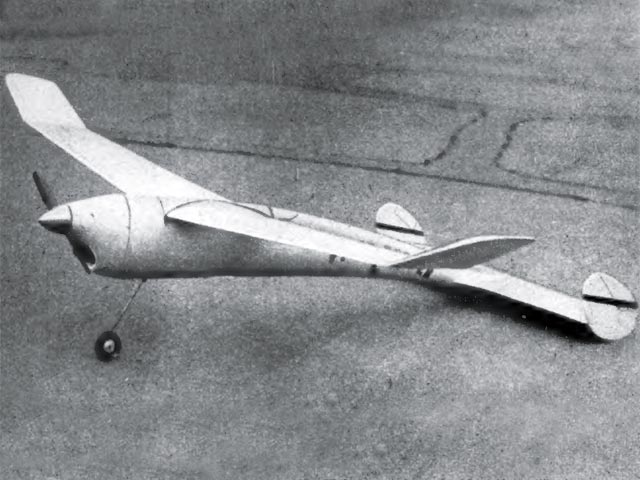 The model was actually designed by Armand Vasquez in 1940 and appeared in Mechinix Illustrated. It was ahead of its time as it had auto surfaces
RyanNX - 23/07/2012
Add a comment