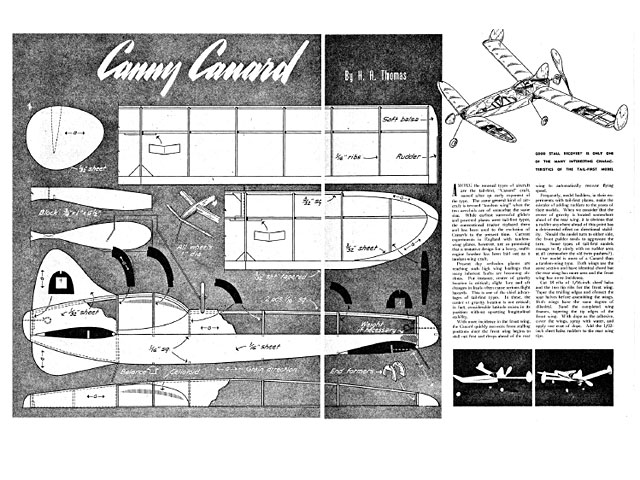 Quote: "Among the unusual types of aircraft are the tail-first, 'Canard' craft, named after an early exponent of the type. The same general kind of aircraft is termed 'tandem wing' when the two aerofoils are of somewhat the same size. While earliest successful gliders and powered planes were tail-first types, the conventional tractor replaced them and has been used to the exclusion of Canards to the present time. Current experiments in England with tandem-wing planes, however, are so promising that a tentative design for a heavy, multi-engine bomber has been laid out as a tandem-wing craft.

Present day orthodox planes are reaching such high wing loadings that many inherent faults are becoming obvious. For instance, center of gravity location is critical; slight fore and aft changes in loads often cause serious flight hazards. This is one of the chief advantages of tail-first types. In these, the center of gravity location is not critical; in fact, considerable latitude exists in its position without upsetting longitudinal stability.

With more incidence in the front wing, the Canard quickly recovers from stalling positions since the front wing begins to stall out first and drops ahead of the rear wing to automatically recover flying speed.

Frequently, model builders, in their experiments with tail-first planes, make the mistake of adding rudders to the noses of their models. When we consider that the center of gravity is located somewhere ahead of the rear wing, it is obvious that a rudder anywhere ahead of this point has a detrimental effect on directional stability. Should the model turn to either side, the front rudder tends to aggravate the turn. Some types of tail-first models manage to fly nicely with no rudder area at all (remember the old twin pushers?).

Our model is more of a Canard than a tandem-wing type. Both wings use the same section and have identical chord but the rear wing has more area and the front wing has more incidence.

Cut 18 ribs of 1/16 inch sheet balsa and the two tip ribs for the front wing. Taper the trailing edges and connect the spar halves before assembling the wings. Both wings have the same degree of dihedral. Sand the completed wing frames, tapering the tip edges of the front wing. With dope as the adhesive, cover the wings, spray with water, and apply one coat of dope. Add the 1/32-inch sheet balsa rudders to the rear wing tips... " 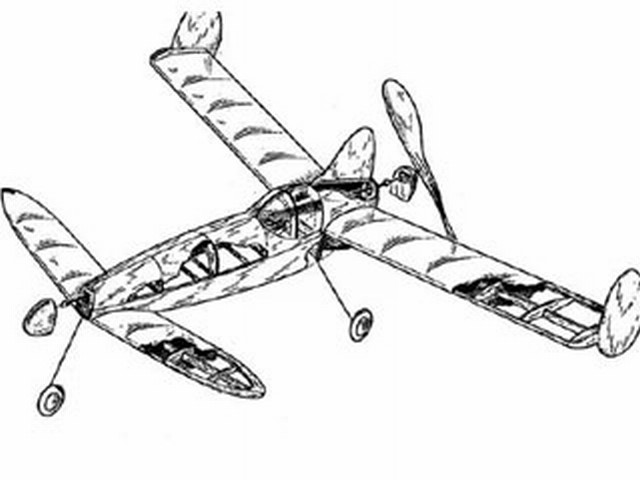 Hi Steve, here are some pictures of models i built from plans I found in Outerzone ...the last are of my 200% enlarged Canny Canard converted to R/C [see more pics 003, 004]. The C/G shown on the plan of the Canny Canard is completely wrong; it must be well father ahead or it will not take off. Cheers!
Guizzo17 - 23/04/2015
Add a comment