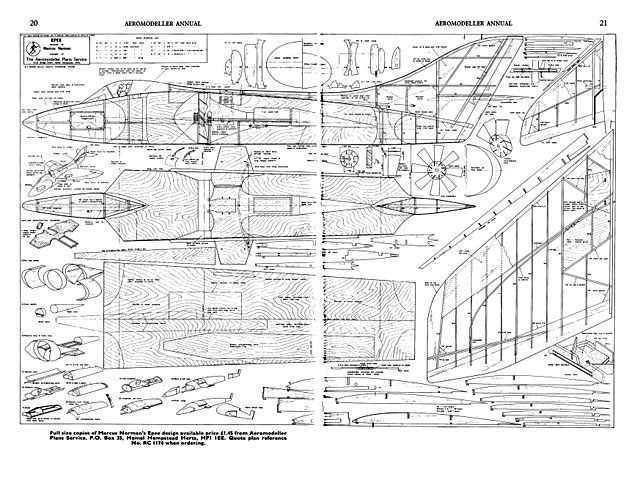 Quote: "I MUST STATE that all the ground work for this kind of model had been done by my father over a period of some fifteen years. His first ducted fan Mig 15 (oz3808) was built in 1950 and his last model, a semi-scale design, was built in 1964. His last eight models were all single channel R/C machines. Anyone can see from this that I was at a considerable advantage as far as calculation and experience were concerned.

The main factor I learned with this type of model is that an efficient fan and ducting system is (as one would naturally assume) essential, coupled with keeping the model as light as possible. By keeping the model light I do not mean building it out of balsa stringers and tissue paper - I mean watching carefully the wing loading to power factor very carefully. My father's ideal power/weight loading factor was 1lb per 1sq ft per 1cc. I have altered this slightly mainly due to the greater power output available nowadays; and my ideal power, weight, loading, ratio is 1lb per sq ft per 1-1/2-2 cc. This has proved most successful as far as I am concerned.

Now I will describe my first true multi radio-controlled ducted fan design. I decided to choose for my model a well tried configuration in this field with plenty of wing area, clean lines and a realistic appearance. I chose a swept wing, swept tail semi-scale 'Scimitar' type design.

The model is 48in long, has a 40in span, weighs 4-3/4lb and is powered by an O.S. 40P. The wing area is just under 4sq ft and it carries Skyleader SL4 radio gear operating ailerons, elevators and rudder. I left out throttle control not because of the weight factor, but because my motor had no throttle on it and I thought this could come on my next model. The model took me three months to design, ie draw up rough plans, weigh radio gear, engines etc, and nine months to build, this was due to very little time available with only occasional evenings available to work on the model. The true building time I would say is probably about six weeks.

The model was first flown in November 1971 with David Runnalls at the controls (I am not a very experienced pilot). It flew 'straight off the drawing board' and was one of the most thrilling experiences in the field of model aviation I have ever witnessed. Subsequent flights have been made and Dave has really put it through its paces: loops, slow rolls, flick rolls, hesitation rolls, stall turns..." 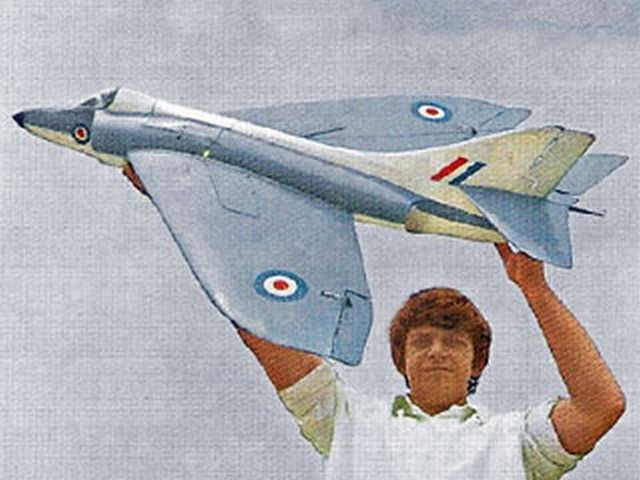