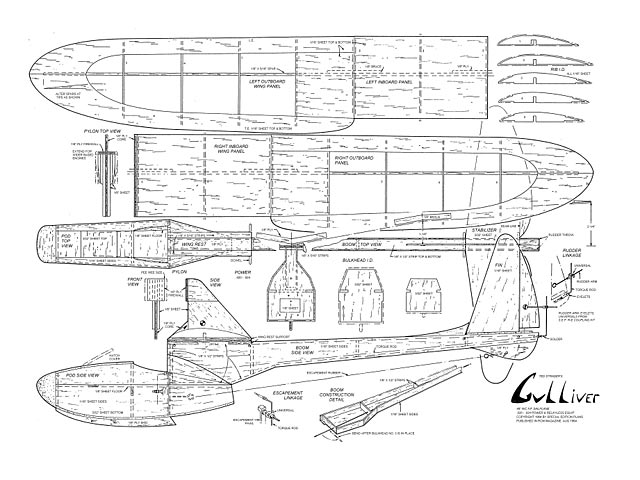 Quote: "We won't admit to having become a creature of habit - but, it was about the beginning of the flying season three years ago that we blossomed out with a small .020 type R/C sailplane. Looking back to the Spring of '61, I recall that our Nomad (oz6264) took about a week to get ready for the field ...so did the Gulliver.

Since '61, we've given much thought to a new model of this favorite size fun plane. Any successor would have to be similar where it counted, eg performance, size, and ease of construction. It would also have to correct some of the minor weaknesses which we couldn't forsee until after a few thousand modelers gave it the acid test. To complete the successor, an all-new design would be used.

Gulliver has already rewarded me with all of these attributes. During construction I timed the assembly of the pod and boom. It was completed though I'm not sure all the cement was dry!) while watching a half hour TV show (I must admit I don't remember the plot).

The boom is strong enough to be used during the off-season for batting practice and the pod is equally determined to survive, for it has been introduced to every stone, clump, and stubble at our field. The pictures - with the exception of the pod close-up were all taken after two days of continuous test glides and flights. It has since become intimate with a scrawny tree - Gulliver winning by a shake-down - and been blown to earth quite undelicately when the wind abruptly shifted 90 degrees at launch and the engine quit.

Even with all of this extra beefing, plus a wing which is almost two-thirds sheet covered top and bottom and three unneeded coats of pigmented dope (changed my mind on color schemes too late) the Gulliver weighed in at only ten and one half ounces. Under normal building conditions it should weigh in at nine or nine and a half ounces..." 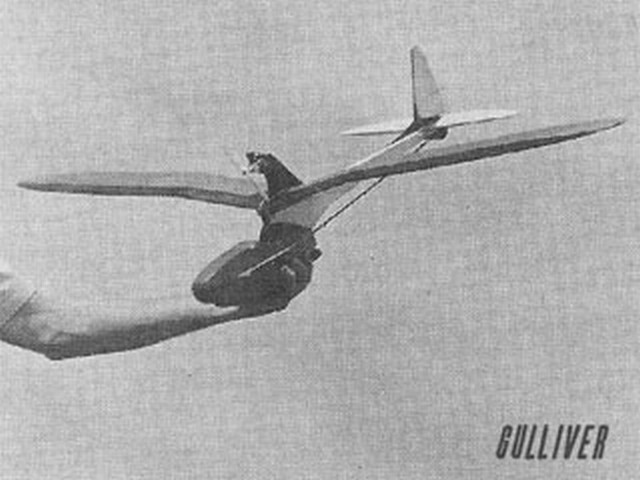 There is a good build thread by GeeW on the Gulliver with lots of pics and useful detail at http://www.rcgroups.com/forums/showthread.php?t=1550669
SteveWMD - 30/11/2012
Added pics of nicely completed Gulliver model [see more pics 003-007] thanks to AndresBuljevicL.
SteveWMD - 29/10/2014
Steve Gordon Walker and I have been exchanging emails about his RC Groups build thread regarding Ted Strader's Gulliver. Turns out I am relatively new to the hobby and really enjoy building almost as much as I do flying. And, I prefer sailplanes but am not exclusively focused on them. Any way, it turns out the club that I joined in Schenectady, NY is the one to which Eric Strader and his son belong. Eric is Ted Strader's son. You'll see from Ted's original article that Eric was the test pilot for the Gulliver. Eric was kind enough to give me an old vintage Gulliver kit which I am in the process of building. With it came two documents that Gordon suggests you may want to add to your posting of the Gulliver plans. See the attached. Hope these help a fellow builder. Happy New Year!
CraigBedell - 05/01/2015
Add a comment