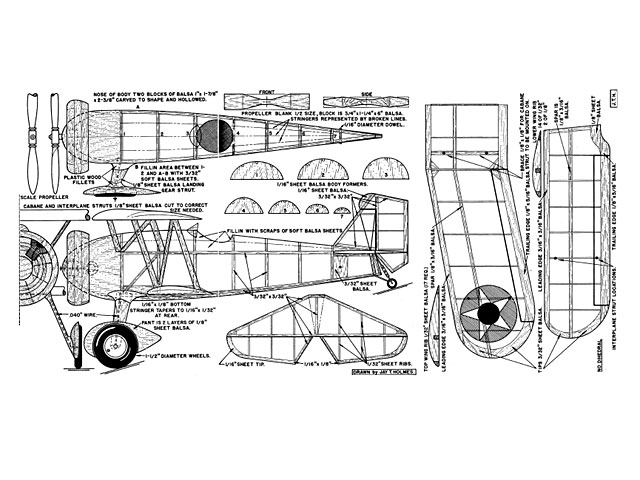 Quote: "THE Seahawk XF7C-3 was an offspring of the Curtiss Export Falcon, a two seat fighter. It was a single seat fighter to be used on carriers and was of average size with a wingspan of 32 ft 8 in and a length of 22 ft 6 in. Powerful thrust was developed by its Wright Cyclone engine. The model built by the author was flown quite successfully due to the excellent proportions of the prototype.

FUSELAGE: Lay down strips of 3/32 square balsa to construct the body sides. Remove from plan and insert crossbraces. Glue the formers to the top and insert the stringers. For the nose obtain two blocks of soft balsa, glue lightly together, and carve to conform with the plan. Cut apart and hollow as shown. Fasten the blocks together again and glue to front of body frame. Cover the completed body with Jap tissue or light Silkspan. Spray the papers and allow to dry; then give it two coats of thin dope.

WINGS: Cut out the ribs as required and carve the leading and trailing edges. Pin the latter two and the spar in place, glue in ribs and allow to dry. Remove from the plan and sand smooth to remove rough slots. Cover the same as the body and be careful not to let the surfaces warp.

EMPENNAGE: Support the leading edge of both the elevator and the rudder off the drawing board with 1/64 sheet balsa. Lay down the 3/32 sq spars and the 1/16 x 1/8 trailing edges and pin in place. Next glue in place the 1/32 x 1/8 ribs and allow to dry. Remove from plan and sand the 1/32 ribs to an airfoil shape. The purpose of raising the leading and trailing edge was to help place the ribs evenly. Cover the same as the wings.

COWL AND ENGINE: The cowl is composed of three layers of 1/4 sheet balsa. These layers are made up of three segments each of which are 120° of a circle apiece, all three being glued together to form a ring. This ring in turn is shaped as shown on the plan. The cylinders are 1/8 flat pieces of balsa (9 all told). These pieces are given a half round shape and then thread is wrapped around each one to represent cooling fins. They are then glued in place around the nose of the model. Paint the cylinders and crank-case black, and add the cowl.

PROPELLER: Carve the flying prop from a medium hard block of balsa and give two or three coats of dope. Insert a wire through rear of the prop hub and bend into a loop in front, then glue in place. Add washers and a nose plug. Bend rear of wire as shown on plan and cover with rubber tubing. Use six to eight strands of 1/8 flat MRL rubber, according to weight of finished model.

LANDING GEAR: Bend the wire as shown on plans and glue in place. Cut the struts from hard balsa and attach firmly to wire with glue. Carve the wheel..." 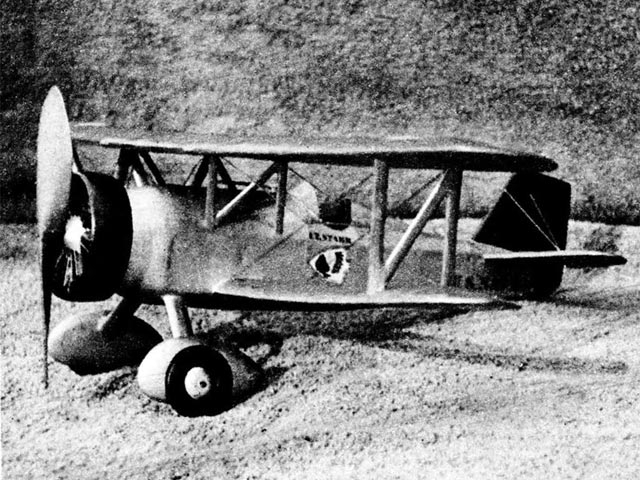