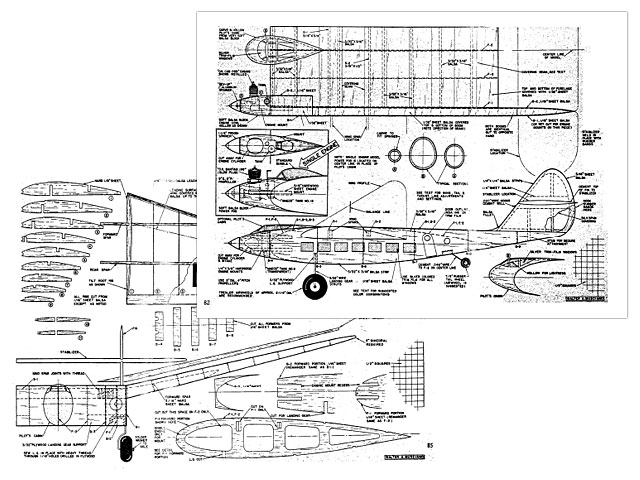 Quote: "Here's a high performance model of a famous lifting body plane. It is designed for .19 to .29 engines. Free-flight Burnelli Transport, by Walter A Musciano.

MYSTERY of how North Koreans maintained their tanks, hundreds of which have been knocked out, may be solved from two widely separated sources. Soviets, according to almost identical descriptions from Eastern Europe and Japan, are in quantity production of a Burnelli lifting body design transport capable of carrying a 33 ton tank complete with crew 1,500 miles.

The above paragraph was published in Aviation Age for Sept 1950 (a page in Aviation Intelligence). Other reliable sources claim that a Burnelli design landed at a Prague airport and was quickly put into a locked hangar before anyone could take a photo. It seems that the countries behind the 'iron curtaini recognize and utilize modern concepts of aerial transportation much quicker than our own government officials and airline operators.

Vincent J Burnelli, a Texan, designed the first lifting body airplane over twenty-five years ago and has designed many modern versions as transports, bombers and cargo carriers. Burnelli designed 'All Wing' airplanes have, for many years, proven themselves superior to conventional airplanes in safety, strength, speed and payload lifting capacity. Despite these advantages Vincent J Burnelli has met with only mild success in promoting his designs. This is due mainly to the human negative reaction toward anything advanced or strange no matter how good the item in question may be. Clyde Pangborn, famous round the world flyer, has enthusiastically demonstrated the advantages of the Burnelli design for several years and stated that 'sixty per cent of the victims in recent air crashes would have been saved in a Burnelli type plane.'

One of the latest Burnelli planes was built by the Canadian Car and Foundry Company and this plane has proven its superiority over many years of operation. Safety is of prime importance to air travelers and Burnelli alone can boast of all the following safety features:

(1) Engines and landing gear compartments are accessible during flight for repairs or adjustments.
(2) Compact airfoil body possesses greater resistance to telescoping on impact.
(3) Wheels transmit landing shocks to a strong body instead of thin wings.
(4) Propellers are close together, therefore plane needs hardly any corrective use of controls during single engine operation. No spiral tendencies.
(5) Engines and propellers are ahead of all structures, thereby engines absorb much of the impact during emergency landings on rough terrain.
(6) Propeller failure is less likely to damage main structure because of the forward location.
(7) The wide fuselage has good flotation qualities for emergency landings at sea.
(8) Engines and fuel tanks are located far apart, thereby minimizing fire hazard.
(9) The design combines flying wing efficiency with conventional plane stability.

Our model is patterned after one of Mr Burnelli's latest designs. This is a sleek four engined transport of turboprop propulsion. Two 2800 hp Allison T-40 turbine engines are housed in each nacelle driving contra-rotating propellers. This arrangement is similar to the new Douglas A2D Skyshark and is the powerplant of the near future. Maximum speed is over 475 mph and cruising range is 3500 miles. As an airliner 70 passengers could be carried by day while sleeping accommodations can handle 40 persons. The payload that can be carried is 44,000 lbs, which is remarkable when we consider the fact that the total weight of the plane empty is only 40,000 lbs. Of course even a greater payload can be carried if the cruising range was to be shortened. As a tank carrier the Burnelli design is ideal in view of the fact that the vehicle can be loaded and unloaded into the center wing between the booms and even dropped by parachute if necessary, as Mr Burnelli once demonstrated to the Armed Forces. The high location of the tail makes the latter very practical.

We wish to express our gratitude to Vincent J Burnelli for such information and valuable design data and to Paul Palanek for his assistance.

In order to obtain a stable free flight model of maximum stability we increased the stabilizer area and the dihedral angle slightly. Conventional two bladed propellers were substituted for the contra-rotating three bladers of the full scale design. The fact that the engines are very close together prevents the model from veering sharply if one engine should inadvertently stop and thereby prevents a possible spin with resulting smash up. We originally intended using one fuel tank for both engines, however some difficulty was encountered because of the length of feed lines. Instead, 'Maeco' transparent tanks were used with great success. These tanks are specificaly made for 30 second engine runs..." 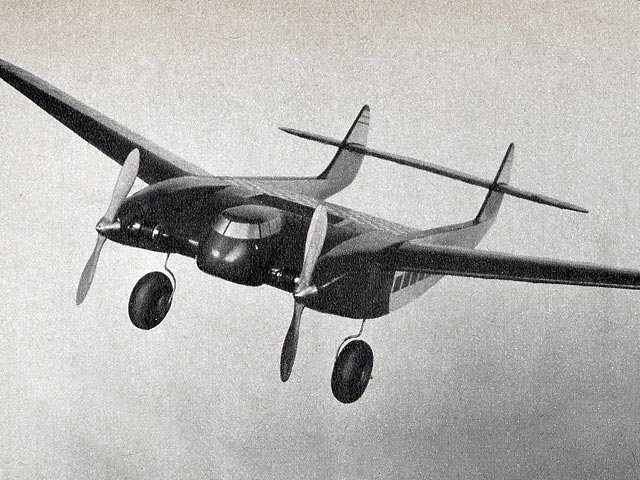