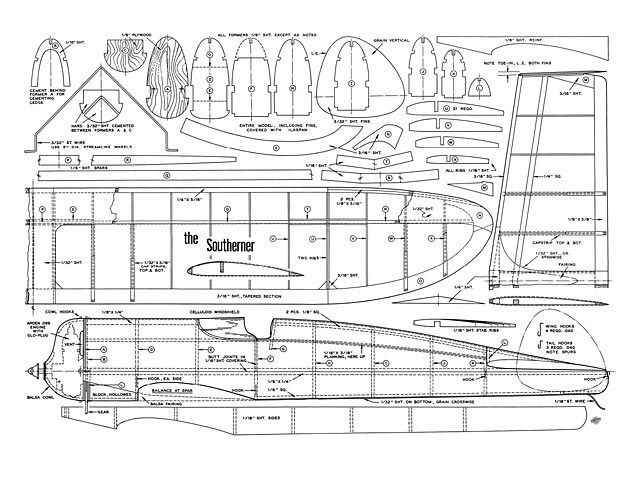 Quote: "Something different and appealing in free-flight for precision contests. The Southerner, by HA Thomas.

FEW modelers realize the extent to which the average contest gas model is overpowered. Never appreciating the fact that this is responsible for their critical adjustments and numerous crack-ups, they assume this to be the criterion of all free-flight gas modeling. This is the reaction of the confirmed control-line flyers particularly. What with screaming power spins and out-of-sight flights, it is no wonder they stick to tethered flight!

What so many modelers miss out on entirely is the sport gas job, designed and built solely for pleasure flying. It can be realistic to whatever extent the individual cares to make it so, and if built ruggedly to a somewhat high power loading (meaning a good-sized model for the power available), it should last for hundreds of flights. A calm afternoon during which we logged nearly forty flights on a sport low-wing gassie stands out as tops for fun in our modeling experience. This is gas modeling at its very best, sir!

The Southerner is a low-wing four-footer built for the glow-plugged Arden .099 engine. John Sadler's famous Pacemaker (oz1739) low-wing design has been a guide; in fact Sadler himself checked our plans and suggested several improvements which we incorporated. The little ship is stoutly built with cleanly cowled engine and monocoque fuselage.

Low-wing models, contrary to general belief, do not require excessive dihedral. Many pylon models use greater dihedral than we have found necessary in low-wingers. Consider the compact force arrange-ment of the low-wing: CG, thrust line, CLA, and CL being grouped more closely than in possibly any other configuration. We won't kid anybody, however, by saying that a low-wing is superior in every way. It hasn't the peculiar effect of the pylon model which makes right hand power turns and straight take-offs a normal tendency. Torque is the chief factor in adjusting a low-wing.

On take-off there is the tendency to get right into the left power turn, the wing tucking down slightly as the model leaves the ground. By using thrust adjustments, torque becomes a dependable force, giving the desired left turns; rudder tab takes care of glide turns.

In addition to its realistic appearance in flight, the low-wing is a lulu on landings. The reasonably low CG makes for a sledding effect in place of the familiar toppling and, given half a chance, the low-wing will land safely, upright. Low-wing experience has made us wary of two things, however: We never use high thrust lines (inverted engines) and we never attempt right power turns.

Building the ship by the full-size plan is a cinch. You will find the fuselage easy, there being only one small portion requiring planking because of compound curves. This is a sport model and the little Arden has plenty of power so do not hesitate to use the tougher grades of balsa. Toward the tail, however, stick to the lighter woods so the model will trim properly.

Cut out all fuselage parts including the plywood front formers. The gear is bent and assembled, with the balsa filler pieces, between the two ply-wood parts. Next cement the 1/8 sheet reinforcements inside the sheet sides, add the lengthwise central strips, then proceed to locate the formers and stringers. One large sheet of 1/16 balsa will cover each side from center line to top and from cockpit to front former. These pieces are trimmed to shape, and when moistened on the out-side, they will fall into place. Add other fitted sheets between the center line and where the planking begins. The planking strips may be tapered, being wider at the headrest than at the tail. Use cement liberally. The bottom is sheet-covered and a soft balsa block is carved and hollowed to fit be-tween wing leading edge and front former. Mount the tail skid securely by binding it to a wedge of hard balsa that fits between the converging lower stringers..."

Update 15/04/2016: Replaced this plan with a clearer copy at higher resolution, thanks to dfritzke. 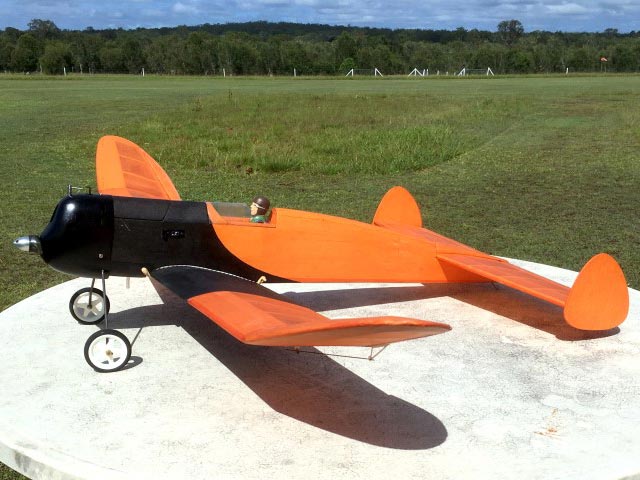 Please find attached herewith a pic or two of my recent 'Southerner' build [main pic, 008]. This one built for a the recent RCG 'ABAK' build-off. This one built very much in accordance with the original freeflight plan but modified to accept 3-function r/c. Because arranging the small twin-fins for r/c could be difficult, I opted to include ailerons for directional control. The pundits were sceptical of the aileron placement in the polyhedral wing tips, but in the event it all worked OK - the model flies just fine... My only problem was the custom-made fuel tank. It was too large and even with the throttle back on full idle it didn't want to stop flying. Construction is regular balsa and with some plywood. Covering is self-coloured tissue over Doculam. Engine used is an Irvine Mills 1.3 diesel with CS carb. Rx is a small Redcon unit and all servos are Hitec HS- 55. AUW ready to fly is 595gms.
Alan Wooster - 12/01/2022
I had the same issue with my Robbe Charter, with a OS .30. It would float forever until I went with a lower pitch prop. eg: 10x6 to 11x4
Philip Lyon - 13/01/2022
Add a comment