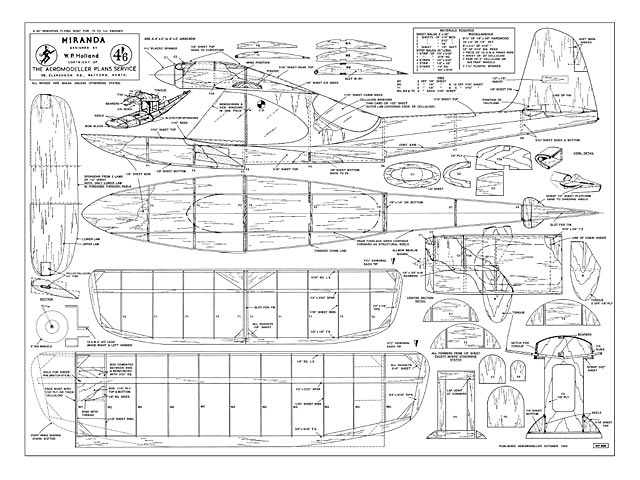 This is a model that can be flown 'wet or dry'. Although designed as a flying boat, an undercarriage can be plugged into the solid sponson tips, and Miranda becomes a landplaneready for ROG in grass or on tarmac until you locate your nearest stretch of suitable water. Simple structure, a flat hull planing bottom, the large cabin, and protected propellor position on the high engine mount are but few of the many points in favour of this attractive model which flew through flight tests with an Allbon Merlin.

We found that it liked a wide left climb after the beautiful long skating take-off run, and a touch of right rudder on the trim tab gave it a smooth right hand glide approach back to a skimming 'landing' - and if that's not enough to tempt you, we can also say that Pete Holland made the prototype in a week of evenings, just to show how simple it is!

A glance at the sketch on the plan shows how the fuselage, or hull, is assembled around two vertical keels of 3/32 in with the central parts of the first six formers mounted between them. The rear hull tapers to a joint of the keels, and outer bulkhead portions complete the hull section back to the rear step. Solid sponsons are mounted integral with the hull, 1/2 in sheet forms the bow block and tail platform, and we are ready to cover with sheet.

Mounted over F4 and F5, the engine nacelle becomes an automatic assembly of tongue, bearers, and formers with 1/8 in covering the top forward section and at the rear. An M.S. tank in the .engine compartment can be hidden by the detachable access hatch, and a 1/2 in sheet cowl ring, C1, adds much to the appearance.

There remains the cabin 'divider' of 1/16 in over which the celluloid windows are applied, then a final layer of thin card or 1/32 in sheet forms an outer protection against water seepage..."

Update 18/09/2015: Replaced this plan with a clearer copy (patterned background removed) thanks to TonyP. 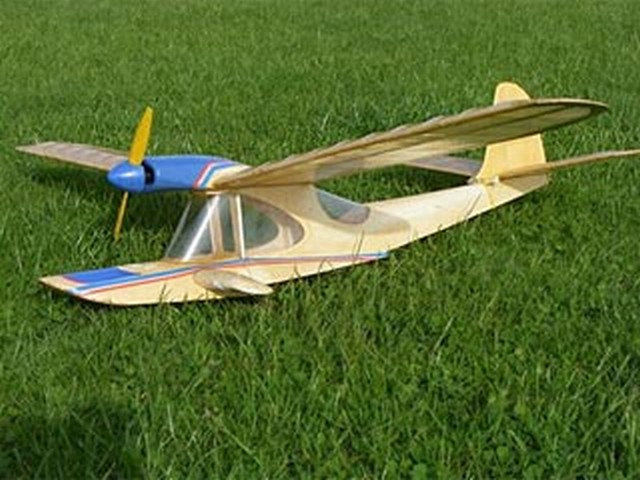 I only came across your site the other day and it is so much to be able to look up Aeromodeller plans that I last saw as a boy. I couldn't remember the name of the next plane I built but search through your site and, much to my surprise, I found it. It was MIRANDA by Peter Holland 1955. I have therefore attached the two pictures I have of that too [more pics 003, 004]. I would have built that in the late 50s. Making flying models was the main thing that kept me sane being stuck in a Boarding School away from home for so long. Thank you for your site.
AndrewB - 24/10/2017
Add a comment