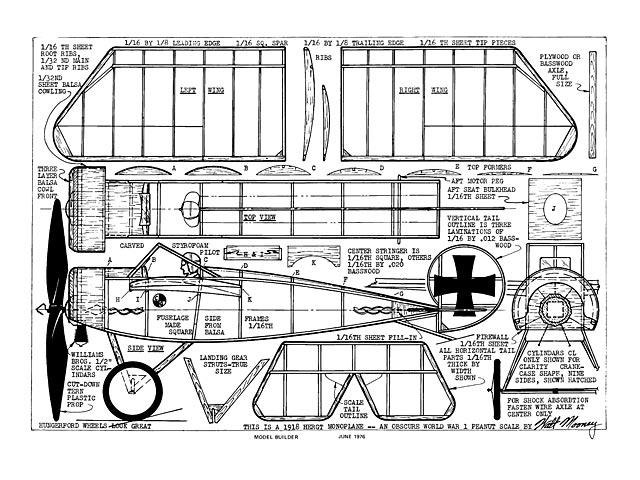 Quote: "The Hergt Monoplane is a rather obscure WWI airplane. Only one was built. With a wingspan of 6 meters and a length of 5.2 meters, it was rather small and probably wouldn't have been much good as a military airplane. It was not equipped with anything in the way of armament, and its top speed was only about 78 mph.

However, it does look a bit like the Fokker E1, and in fact its configuration is about what a model builder would do to the E1 to make it into the ideal WWI peanut.

It was built with a plywood skinned fuselage and plywood covered cantilever wings. Therefore there is no wire bracing to be modeled. It had pronounced washout in the wings - note the wing twist shown on the plans.

The tail looks like it was made of parts taken from an E1, and these surfaces are therefore proportionately larger when used on this small aircraft. This also would explain the fact that there was a cross on the vertical tail, but none in evidence elsewhere, on the air-plane in the photo that is available in 'German Aircraft of the First World War' by Peter Gray and Owen Thetford. Mr FD Hergt also used wheels that were easily available and therefore look large on this small aircraft.

Since the wing and fuselage were plywood covered, internal structure is not easily determined. The model was made of standard built-up, tissue-covered structure to keep it as light as possible. It uses some materials that are not really standard, so this article makes some comments about structural concepts, and lists sources where these materials can be purchased.

Note that the wings are attached to the fuselage sides about a quarter of the way down from the top longerons. In this location, both the leading and trailing edge of the wing can apply loads into or out of the fuselage structure..." 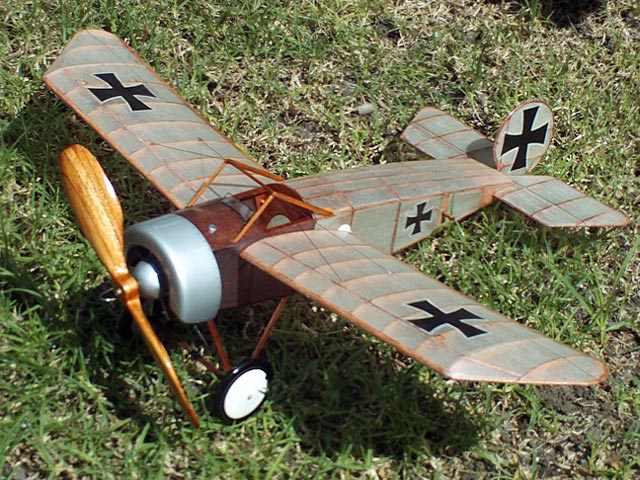 Hello Steve!, this is my last work, a German 1918 Hergt monoplane, designed by Ing. F.D. Hergt and tested by Mario Scherff, achieved speed was 125 mph. I have no flight it yet but maybe this week end I'll can do it. I hope you like, the engine (more or less a Gnôme 9c and 80hp) is made only from balsa wood too. Best regards,
MarcoAGuillermo - 11/02/2014
Add a comment