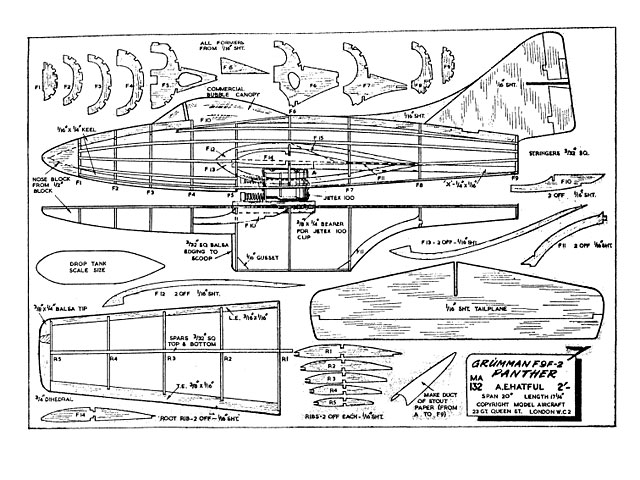 Quote: "The first model Panther was built soon after the Jetex 100 came on the market. The unit was mounted within the fuselage, completely enclosed except for a ducting arrangement made from cartridge paper and utilising the wing root intakes which were intended to carry air past the unit.

Unfortunately, this first Panther proved too heavy to provide the sort of performance we expected and it was evident that the thrust from the 100 was not being used to advantage. By lowering the unit out into the wind into a position which brought the thrust line of the motor coincident with the lower contour line of the fuselage a marked improvement in thrust was obtained.

After building a lighter version, with not quite so much dope used in finishing, the Panther flew very well and helped collect information which led to the construction of several smaller Jetex 50 models of jet fighters.

Fuselage: Cut the outline pieces from 1/16 sheet balsa and pin in position on plan together with piece F15 and strip 'X' of 1/4 x 1/16. Cement the formers in position using a piece of 3/32 x 3/32 in. to line up the notches. The notches in formers F2 to F8 may be cut slightly oversize in order to obtain a smoother stringer line. Add F11, F14, F12, and F13. Cement the 3/32 x 3/32 medium hard balsa stringers into the notches in the formers, then add F10, which forms a base for the cockpit cover. Lift this side from the plan and construct the other. Cement on the two halves of the nose block, instal the piece of 3/8 x 1/4 in for the Jetex clip, then fine sand-paper the fuselage all over.

Wings: Pin the lower 3/32 x 3/32 spar to the plan, then the trailing edge (after notching for the ribs). Cement the ribs in place, remembering to lean rib R1 inwards to obtain approximately 3/4 in dihedral. Cement the leading edge in place and add the top spar Roughly shape the balsa blocks for the wingtips, then cement in position and finish off with fine sandpaper. Although it is a little more awkward for covering it was found to improve the wing-to-fuselage join if the wings were assembled to the fuselage before covering. Check for equal dihedral each side.

The original was covered with Jap, but lightweight rag tissue has been used since and found to be just as effective. The wing-root fairings look very smooth if you are able to cover them with notepaper top and bottom. Water shrink the tissue and make up a rough jig using several books to hold the nose and tail of the fuselage and the extreme tips of the wings; this should prevent any severe warping taking place. Continue sandpapering the fin, dorsal fairing and tailplane until all sawmarks have disappeared and they are glassy smooth, then cement them in place. Attach the cockpit cover by running a neat fillet of cement around its edge while held in correct position on the fuselage.

Clear dope the whole model holding the fuselage and wing tips as before until dry to stop warps. Make a 'channel' from notepaper to fit into the arched recesses in formers F7 and F8 and extending from the rear edge of the clip to former 9 as shown on the plan. Use colour dope thinly and finish either silver, silver grey or a very dark blue (almost black). Affix the American star insignia on either side of the nose between F2 and F4 and on the port upper and starboard lower mainplanes. Try not to exceed an all up weight of 1-1/2 oz. There is a variety of cigar container made from aluminium and shaped like a torpedo, which when cut and fitted with a balsa tail cone, provides a realistic lightweight drop tank.

With the model finished and complete, balance it roughly at the wing spar position, then start test gliding. If there is a slight breeze don't be satisfied with a lilting, half-coming-back-towards-you glide; add weight to the nose until with a good hard hand launch the glide is fast, flat and straight.

Now load up your '100' and try a power flight. You may have to remove some of the weight from the nose, but remember the Panther flies fast so try to launch it that way." 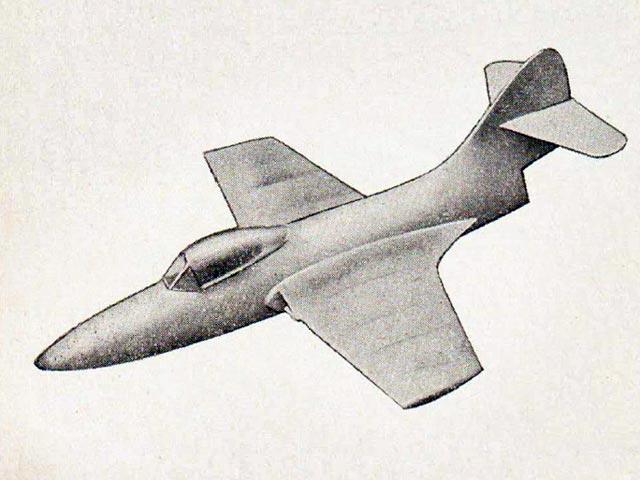