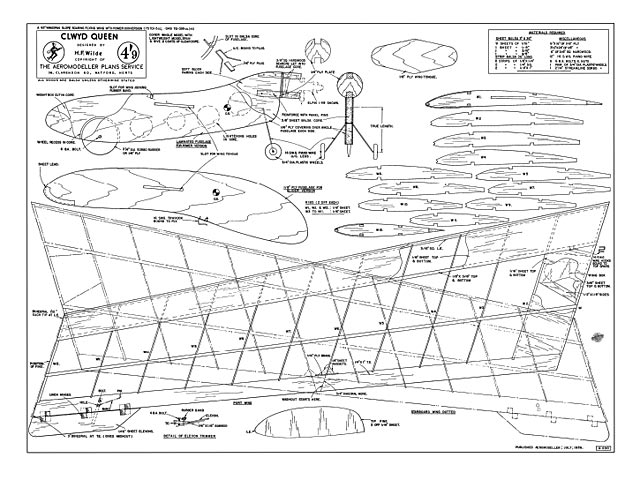 Quote: "With less construction involved, and definitely less susceptibility to damage, the tailless model is a fascinating subject, particularly when one is presented with a design that holds two British National records. The 'Queen' of which no less than three have been lost on the Clwyd slopes, established a lightweight record of 9:51 in 1954 and a record with FAI wing loading of 3:17 as far back as 1949. In its latest version, as presented here, it can be flown in three forms, either for slope soaring, two-launching or as a power model for up to 1.5 cc.

Construction is both simple and inexpensive, and naturally enough begins with cutting out the wing ribs, which change in section from root to tip.

Pin down the two lower spars over the plan, cementing the ribs in place, using packing strips where necessary to provide a wash-out and add the two top spars. Make sure that the root tip is at a slight angle, to allow for dihedral, and the tip rib W.12 should be inclined at the same angle to keep the tip fins vertical. Now add the leading edge to the ribs, remove the wing from the plan. Joint the trailing edge at W.6, then fit to follow the lower profile of the ribs at all points. Now pin down wing on the board except for the outer trailing edge portion and insert packing under the trailing edge to obtain the correct wash-out angle before cementing firm. Linen patches over the trailing edge-joints are advised; Attach the leading edge sheeting on the upper surface, remove from the board and build on the underside.

Now make the two wing boxes from hard balsa, pre-cementing or using a slow-drying glue. Before fixing the wings, check for alignment with the tongue in place between the two wing panels. Fit the elevons while the box assembly is drying in position..."

Artice pages, thanks to RFJ. 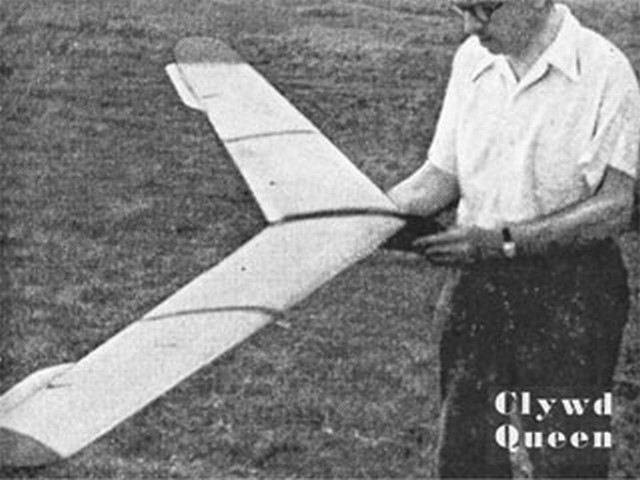