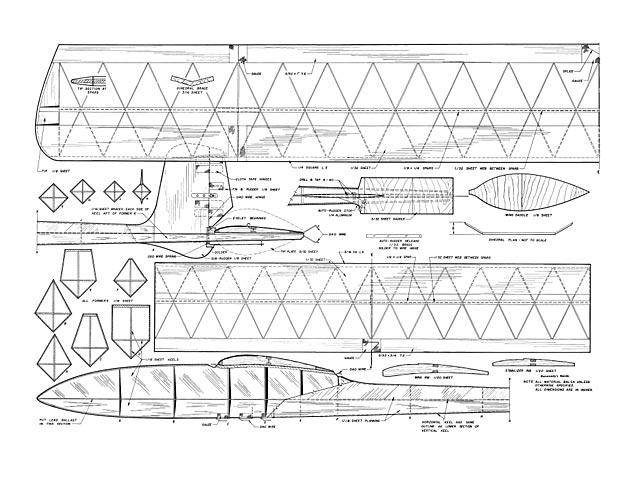 QUote: "This Nordic is the sixth design of a series of towline gliders designed and built in the past four years. In all 21 models were built, eight of them Nordics, and the sixth incorporates the best features of all of them. To date, this model has won nine first places, three second places, two thirds and has placed fourth in both the 1953 and 1954 Nationals.

Construction is easy and only the auto-rudder should require any special attention. The semi-geodetic construction used on the wings and stabilizer is no more difficult than conventional construction and really pays off in warp-resistance and high impact strength. The I-beam spar is so strong that a 30 lb test line was broken on the tow without folding the wings. The auto-rudder is foolproof and that is something that can be said of few auto-rudders. It affords independent adjustment of the rudder in both the tow and the glide.

Start construction with the stabilizer. Cut out three straight ribs, shown in the side view of the fuselage, and 24 diagonal ribs from 1/20 sheet balsa. Pin the LE, lower spar and TE onto the plan and slip the straight ribs and alternate diagonal ribs into place, cementing each joint well. Cut the remaining ribs in half between the spars, removing about 1/16 in to allow for the ribs already in place. Cement these ribs in place, being careful to line them up straight.

Now between the ribs, above the spar, to form the web of the I-beam, cement one piece of 1/32 x 2 in balsa, 1-15/18 wide, and 12 cross-grain strips, 1/8 in wide. The upper spar should now be fastened in place and the structure removed from the board when dry. Carve the LE to shape and cement the 1/32 sheeting in position. Bend the hooks to shape and cement them into place; cover with gauze and then recement every joint in the structure. Cover with Japanese tissue or Skysail and dope well.

This brings us to the wing, where construction procedure parallels that of the stabilizer. The center section is built first with the 3/16 dihedral gussets taking the place of the 1/32 sheet web at each end. When dry, the center section is raised at an angle to permit the tip panel to be built onto it - first one end, then the other. The straight ribs and tips are added and the sheeting put in place, starting at the center section. Be sure the spars are flush with the edges of the ribs for best results in covering. Gauze is cemented over the dihedral joints and all joints recemented. Cover with Japanese tissue or Skysail and dope well.

For the fuselage, start by cutting out the 1/16 crutch and keels. The lower fuselage keel is used as a pattern for the crutch. An additional section is spliced onto the crutch at the tail to give the full 41 in length. The crutch should be fastened down flat and the upper keel and formers cemented into place. The wing saddle, fin and stabilizer saddle may be mounted now. When dry, the crutch may be raised from the board..." 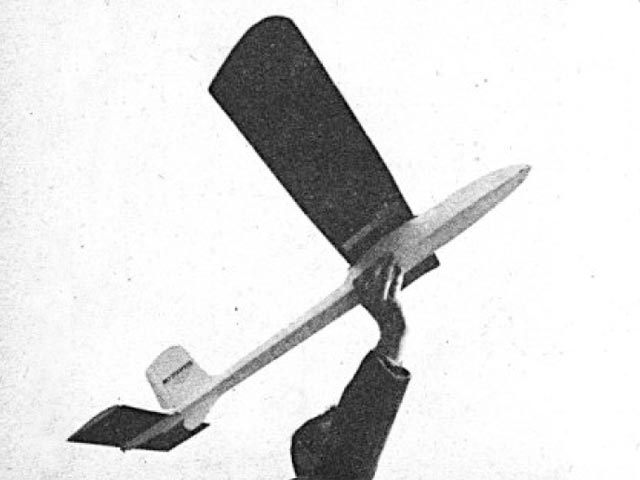