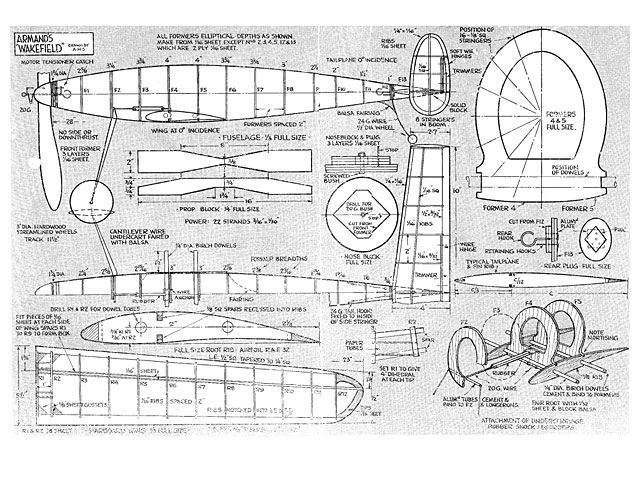 Quote: "THE general structural features of this design have already been tested in a shoulder-wing Wakefield class model that I recently constructed, and the proportions, etc are partly taken from experience gained therein.

Fuselage. In form the fuselage is streamlined both in fore and aft and vertical directions. The formers are ellipses constructed as follows: the joins are, of course, found by taking as radius the semi-major axis and as centre the end of the minor; arcs are drawn to cut the major axis; pins are then driven in at these points of intersection and at the end of the minor axis; a loop of thin string is tied tightly round the bases of these pins; the pin at the end of the minor axis is then removed, a pencil inserted in the loop, and drawn round. Nos.4 and 5 are slightly modified, but these are shown in the drawings, as is also the material required together with a table of the axis. The maximum cross-section has axis 4 in by 3 in; this gives a cross-section of 9.42 sq in, ample for a fuselage of length 30 in.

Sixteen equidistant stringers of in. square balsa are notched into each former (except for the, last bay); because of their closeness it is hardly necessary to cut away the edge of the former between each pair to prevent ridges in the covering, but this might be done if desired. The front former is circular and made up of three plys of 1/16 in sheet; the portion cut from the centre should be retained and fixed to the back of the nose-block which is a similar disc. The tail portion of the fuselage consists of one former, No.13, one bay having eight stringers, and a solid block carved to end off the fuselage. The attachment is shown in the drawings.

The construction of the centre-section should be sufficiently clear from the drawings. All these features have, as I have said, been tried out and found sufficiently strong.

Undergear. The undercarriage is fully cantilever; it is of wire faired with balsa: the construction should be clear from the plans. This design was chosen for cleanness and simplicity of construction. Note: the 'lever arm' portion is not held in any way except by the rubber; this rubber should be made sufficiently strong to absorb shocks efficiently and when at rest the lever and the rubber should be in line as shown..."